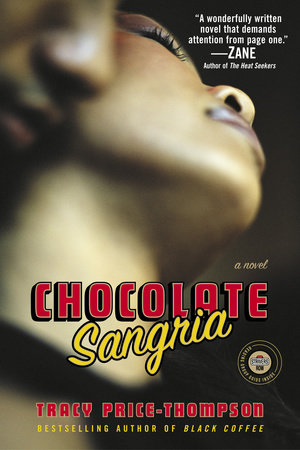 1. Children can sometimes be cruel. Why were the neighborhood children so merciless to Juanita and Scooter? What did they do to protect themselves from such cruelty? And how did their bond become stronger and more complex as they grew older?

2. Hattie is the self-sacrificing epitome of the strong Black woman. What made her this way? How did the murder of her young sister shape her views of Hispanics? What did she see in Lola that touched her heart? Why do you think she agreed to raise Juanita, and what motivated her to build such an elaborate lie surrounding Juanita’s birth and parentage? What could Lola and Pierre have done differently?

3. While Juanita experiments mildly with acts of bulimia in Chocolate Sangria, the novel is clearly not meant to address bulimia as a health issue or to resolve the crisis of bulimics in our society. Yet, what effect did Juanita’s weight and ambiguous looks have on her self-esteem? Were her efforts to make herself appear as “Black” as possible understandable? How confusing and dismaying might it have been for her to look through her family photo album and not see anyone who looked remotely like her? Is our self-identity determined by our physical features and our environment, or does it come from within?

4. Each of the main characters in Chocolate Sangria suffered tragic experiences that influenced events over the course of their lives. How did you feel about Scooter? Could his early trauma have been partially responsible for the choices he made later on in life? What was lacking in his character and in his life that made him such a willing victim to Jorge? Should he have turned himself in to the authorities for his role in the robbery, or was his shame, his stabbing, and the realization of how his father really died punishment enough?

5. What role, in your opinion, did Uncle Herbie play in Chocolate Sangria? From where did his sense of obligation and responsibility toward Hattie and Juanita spring? How helpful was he in providing balance to Hattie’s biases? In providing positive reinforcement as Juanita struggled to accept her weight and body-type?

6. The role Conan played in the death of his twin brother and the guilt he experienced as a result of Thor’s death was powerful and intense. His love for his best friend, Jorge, was also deep and profound. Do you think Conan’s guilt was a factor in his allegiance to Jorge, even when he himself felt betrayed? And after losing Thor, why did Conan draw closer to Jorge? Might it have been easier for Conan to see Jorge’s true colors if his eyes were not so clouded with grief?

7. How do you think the sadistic sexual abuse Jorge suffered as a child contributed to his outlook on non-Hispanics and his inability to feel remorse for using and abusing others, especially in terms of sexual domination? Was there something unnatural about the possessiveness he felt toward Conan, or might this type of behavior be typical of those who have experienced early trauma and suffered childhood loss? Was Jorge gay? Straight? Or simply an opportunist?

8. At the conclusion of Chocolate Sangria Scooter is at a crossroads in his life. What direction can you visualize his life taking? Did he use Sol Steinberg in much the same manner that Jorge used him? Can his friendship with Juanita be restored to its former level? How is he likely to feel about Juanita’s growing relationship with Conan?

9. In Chocolate Sangria people of color share limited resources and a common community, however, intra-racial prejudice is experienced on many levels. Why do you think minorities in America compete against each other, and what can this be attributed to? Is it realistic to think that two people, in spite of different backgrounds and family pressures, can love each other and stay happily together?

10. What is more necessary to Juanita and Conan’s lasting love: their commonalities or their differences? How does the diversity in their ethnicities bring them closer together? Juanita was obviously Black and proud. Does being pro-Black mean you must also be anti other races?

11. Which of the characters in Chocolate Sangria did you identify with the most? The least? Which is more important to human relations, tolerance or respect? What are the biggest challenges you face in tolerating, respecting or accepting others who are VERY different from you?  What would it take for you to overcome those challenges?

From the Hardcover edition.
Learn More About Chocolate Sangria
print

To Have and to Hold
Fern Michaels

Between a Mother and her Child
Elizabeth Noble

The Best of Friends
Joanna Trollope

The Beauty of Surrender
Eden Bradley

The Icing on the Cupcake
Jennifer Ross

Once Upon a Bride
Jean Stone

Caught in the Act
Jill Sorenson

Mine Are Spectacular!
Janice Kaplan and Lynn Schnurnberger

Four Steps to the Altar
Jean Stone
Back to Top