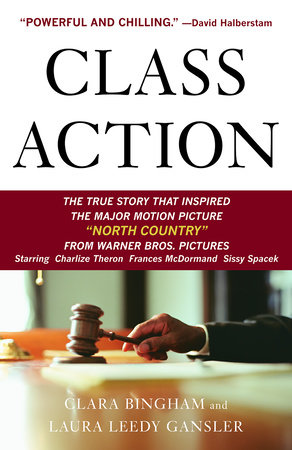 No matter what you do for a living, Class Action raises important questions about the modern American workplace and the truth about equal opportunity. As the book’s extraordinary courtroom testimony reveals, the line between dignity and economic survival is finer than you might think. The topics that follow are designed to enhance your reading group’s discussion of Lois Jenson’s story. We also hope to inspire personal avenues of inquiry as you read this eye-opening work.

When Lois Jenson went to work at Eveleth Mines in 1975, she saw her new job as a lifesaver–a way to bring herself, and her young son, out of minimum-wage poverty. But she soon discovered that the comfortable paychecks came with a dangerous surcharge. The targets of sexual threats, groping, job sabotage, and anonymous notes accompanied by graphic drawings or sex paraphernalia, Lois and the other women endured an ongoing persecution that threatened their sanity, and for some, had serious physical consequences as well. Yet management and the union looked the other way. It didn’t matter if the women of Eveleth performed their jobs well, or desperately needed the wages to support their single-parent households: because of their gender, they were considered a threat. The courts had required Eveleth to hire women, but it would take another lawsuit–and years of persistence on the part of Lois and her legal team–before women could work at the mines with less fear.

1. The opening scene says a lot about Lois’s personality. The roads are so clogged with snow that her three female colleagues miss their first day of work, yet Lois manages to make it on time and even gives a ride to a miner whose truck has stalled. By the end of the book, what has become of Lois’s persevering, energetic spirit?

2. The most common excuse given for the male miners’ sexism is that women like Lois take away “men’s jobs,” asserting that only men deserve or need a good compensation package. How did that notion survive as long as it did, especially with so many single women raising children in the Mesabi Iron Range? Without the 1974 consent decree, would Eveleth have had any incentive to open its hiring to women? Does your workplace have an unspoken distinction between “men’s work” and “women’s work”?

3. Discuss the worst job you’ve ever had. What made it so unbearable? What enabled you to leave it? Why did Lois and her co-plaintiffs stay at Eveleth for so many years?

4. The Eveleth men who opposed having female coworkers used sex as the main means of intimidation, ranging from graphic talk, posters, and phallic items, to stalking and threats of rape. What does the sexual nature of the harassment say about the men who perpetrated it?

Why was it particularly traumatic in the isolated setting of the mine? What are some of the more subtle ways in which these sexual tactics manifest themselves in modern society, including the political arena?

5. How do sexual-harassment laws affect your on-the-job interactions? Have you ever encountered a situation that was difficult to interpret as harassment?

6. Early in life, Lois experienced date rape. A few years later, she was abandoned by a fiancé when he learned she was pregnant. On the job, she was seduced by a co-worker who tricked her into thinking he wanted a caring relationship with her. She also had a brief marriage with an alcoholic who lied to her about his financial situation. After her divorce, another co-worker developed a disturbing obsession with Lois, sending her bizarre letters and gifts. Compare the different forms of harm caused by these five men. Do you think it’s true that a good man is hard to find?

7. Though Lois was physically exhausted after her first Eveleth days, she enjoyed being free from the mental pressures of her job at the credit union, where tellers’ mistakes were paid for out of their own pockets. Discuss the concept of “hard work.” How does the miners’ stress measure up to that of white-collar workers?

8. Lois defies the stereotype of a miner. She writes poetry, finds solace in self-help books, and exudes femininity when she’s not in uniform. Some of her co-workers claimed that she took the harassment too seriously and was too sensitive. Did her personality keep her from getting ahead, or does it prove that she possibly was stronger than some of her tough-talking peers?

9. In the epilogue, Lois’s friend Kent says, “A lot of good people’s images have been hurt. . . . There were only a select few that treated the women that way but we all got the rap for it.” Do men like Kent deserve any of the blame for what happened? Were there consequences for the few men who tried to intervene?

10. At first, Pat won the respect of the union and resisted what she referred to as Lois’s “gossip sessions.” But once Pat joined the lawsuit, it became clear that she too had been angered by the harassment. Why didn’t her union clout give help her improve the women’s working conditions? Why would miners such as Joan Hunholz even go so far as to testify in favor of the men? Discuss the fickle dynamic between Lois and her co-plaintiffs.

11. Lois’s case was not perceived to be lucrative, making it hard for her to get a lawyer. Did reading about Paul Sprenger change your perception of attorneys? What reforms would have made Lois’s lawsuit less costly and less emotionally painful?

12. Do you think it’s simply coincidental that a settlement was not reached until a female insurance representative was assigned to negotiate on behalf of Oglebay Norton?

13. In “The Verdicts,” Jean Boler says that she thinks the women “would probably have gone through less stress by not speaking out than they did by standing up for what was right.” Do you agree? After the experience with special master Judge McNulty, and faced with a primarily male jury, would you have accepted the settlement or gone to trial?

14. What are the chances of the pink-collar ghetto and the glass ceiling becoming relics of the past?

Classmates Clara Bingham and Laura Leedy Gansler graduated from Harvard University in 1985. Currently a freelance journalist, Bingham has served as White House correspondent for Newsweek and is also the author of Women on the Hill: Challenging the Culture of Congress. She lives in Washington, D.C., with her husband and their three children. Gansler has taught law at American University and is now counsel for a dispute resolution firm. She lives in Chevy Chase, Maryland, with her husband and sons.


From the Hardcover edition.
Learn More About Class Action
print

Walk Out Walk On
Margaret J. Wheatley and Deborah Frieze

Can You Hear Me Now?
Celina Caesar-Chavannes

Save the Males
Kathleen Parker

“They Take Our Jobs!”
Aviva Chomsky

Lying Down with the Lions
H. Lee Halterman and Ronald V. Dellums

Dr. Rice in the House

Forcing the Spring
Jo Becker
Back to Top