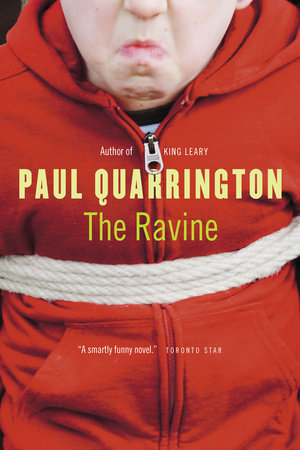 1. “That’s probably the thing I’m best at in my life, tying knots,” Phil says. Is it a fair description of his life and the book we’re reading? How?

2. How does TV influence Phil’s life and The Ravine as a whole?

3. Several times Phil corrects himself, and doubts his memories of events he’s told us about or has these accounts refuted by other characters (whose words he transcribes). Is Phil a reliable narrator? What effect does his reliability as a narrator have on your sense of him and his life?

4. What do you regard as the funniest moment in this otherwise dark book?

5. Why does Phil have an affair with Bellamy?

6. Phil’s daughters are named Ellis and Currer; the man who directs his first play is called George Gordon; he is friends with a (William) Beckett. What’s the significance of names in The Ravine?

7. What does The Ravine tell us about “high” v. “popular” culture? (Among other things, you might consider the arguments Jay and Phil have about their careers, the importance of The Twilight Zone and Barchester Towers to the plot of The Ravine, and the role played by John Hooper.)

9. In what ways does The Ravine define personal and/or professional success?

10. What different responses to evil does The Ravine explore?

11. The Ravine features a large cast of major characters — Phil, Jay — and more minor characters, including Phil’s rival, the novelist John Hooper; barmaid and doctoral student Amy; Phil’s sometime-girlfriend, Bellamy; Veronica’s new boyfriend, Kerwen. . . . Who is your favourite minor character in the book, and why?

12. “Just because we’re brothers doesn’t mean we’re the same or even similar.” Describe the relationship between Phil and Jay McQuigge. Why does Jay help Phil the way he does?

13. Phil writes about what he’s writing as he’s writing it. Starting out he tells us his strengths and weaknesses as a novelist; when he writes a scene in screenplay form, he says that it’s because “it affords distance.” Later on, a character in Hooper’s novel Baxter turns out to be based on Phil (and to further confuse things, his name is Paul). What do you make of the uses of metafiction — the ways The Ravine is aware of itself and about itself — in this novel?

14. How is The Ravine similar to and different from Paul Quarrington’s other books?

15. What is the “eleventh commandment” in The Ravine, and why does it matter?

16. Do you like Phil McQuigge? Or, are you at least willing to see what he makes of himself? How does Paul Quarrington keep alive the reader’s sympathy for his drunk, self-obsessed, self-destructive narrator?

18. Paul Quarrington described The Ravine as what would happen if he wrote Mystic River, the Dennis Lehane novel that was made into a film by Clint Eastwood. What does he mean?

19. Will you recommend The Ravine to your friends? Why, or why not?

20. “Well, can’t you just make something up?” How do you feel about the ending of The Ravine?

Learn More About The Ravine
print

The Origin of Species
Nino Ricci

Where We Have to Go
Lauren Kirshner

The Half-Life of Happiness
John Casey

The Year of the Zinc Penny
Rick DeMarinis

California’s Over
Louis B. Jones

Built in a Day
Steven Rinehart

The Rags of Time
Maureen Howard

The Perfectionists
Gail Godwin
Back to Top