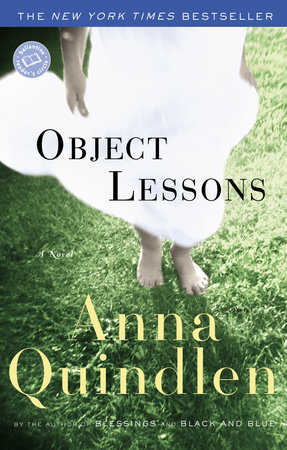 1. Object Lessons unfolds mostly through the eyes of twelve-year-old Maggie. In which ways is Maggie older and more perceptive than her age would suggest? How is she naive? How do you envision Maggie’s evolution as she grows older and away from her family?

2. Does the book have the elements of a traditional coming-of-age novel? If so, what are they? Do you agree with Connie’s assessment at the end of the book that her daughter has become a woman? In what ways is Maggie still a little girl?

3. What does the development being built near Tommy and Connie’s house represent to the various Scanlans? To the neighborhood kids, including Maggie, Debbie, Bruce, and Richard? To the town of Kenwood as a whole? How does it represent a larger theme or symbol in the novel?

4. How do Maggie and Connie have a typical mother-daughter rapport? An atypical one? How is Connie’s attitude toward Maggie influenced by the attitudes of her parents toward her?

5. What factors motivated Tommy and Connie to marry? What initially draws one to the other? How are they well-matched? What causes their marriage to flounder?

6. Why is it significant that Joey Martinelli appears on Connie’s doorstep when he does? How has she become a different person from the girl he once knew? What attributes would she like to bring to the surface once again?

8. What role does the Roman Catholic Church play in Object Lessons? How does the Church and its rituals represent a spiritual force for the characters? In which ways is it a business entity?

9. At the beginning of Object Lessons, John Scanlan rules over the family as an indomitable patriarch. What about his personality is so arresting, both to those within the family and outside of it? How does he inspire emotion—whether it’s fear, respect, or loathing? Why do he and Maggie get along so well? How do you see the family evolving as they adjust to his death?

10. Whom does Maggie look up to as a role model, both within her family and outside of it? What attributes do these people have in common? Why does she so dislike her cousin Monica?

11. The friendship between Maggie and Debbie Malone evaporates during the course of the book. Why do you think that Debbie turns on Maggie? How is their friendship different from the relationship Connie has with Celeste?

12. What does the Malone family represent to Maggie? Why does Debbie’s sister, Helen, take a liking to Maggie?

13. After his stroke, John Scanlan says, “It’s not the dying I mind, it’s the changing.” How is this statement typical of his character? Which members of his family would agree with him; who in this novel would disagree?

14. How do Maggie’s two grandfathers compare and contrast with each other? Which attributes from each does Maggie seem to have? To which one does she seem most similar? Why?

15. Debbie decries always being known as “Helen Malone’s sister”; Maggie counters that she’s always “John Scanlan’s granddaughter.” How do the two girls grapple with the idea of identity, especially as it relates to their relationship to other family members? How does each girl try to form her own individuality? How do names and nicknames play a part in identity in Object Lessons?

16. “Until this horrible sweaty summer, lines had been drawn,” Maggie recalls sadly. What connections and boundaries are erased from Maggie’s life during the course of the book? Which fissures are the most apparent? How does Maggie handle the disintegration of these connections?

17. In your opinion, why do the kids begin setting fires in the development? Why does Maggie initially participate? At the last fire, are Maggie’s actions heroic or cowardly, or a combination of the two? Why? Do you think that her behavior hastens the end of her friendship with Debbie?

18. In which ways does John’s death free Mary Frances? Why is she consumed by the memory of her dead daughter, and why does she want to be buried with her? Why does Mary Frances prefer Connie and Tommy living with her to her other children?

19. At the beginning of Object Lessons, Maggie “listens too much”; by the end of the novel, she’s found her voice. Why did it take so long for her true self to emerge? How do you think she’ll merge her newfound consciousness with the competing voices of her past influences?

Learn More About Object Lessons
print
Back to Top