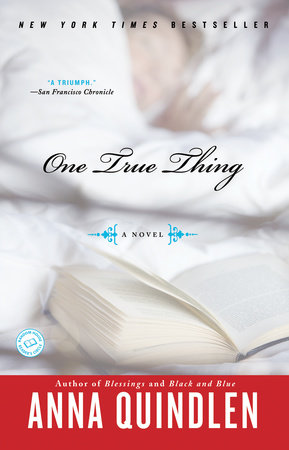 1. One True Thing begins with Ellen in jail. What do you think about the book beginning this way? Did it affect the way you read the rest of the story, knowing (to some extent) how it would end? Looking back, do you think that scene in jail ultimately adds or detracts from the mystery of the story? How?

2. What was your ﬁrst impression of Ellen? What did you think of her when you ﬁnished the novel? It’s clear that she changes over the course of her mother’s illness and in the wake of her death, but in what speciﬁc ways?

3. Kate Gulden seems to be the archetypal “perfect mother.” Was she? How were her relationships with her sons, Jeff and Brian, different from her relationship with Ellen?

4. What did you think of George Gulden at the beginning of the book? Were you surprised as you learned more about his relationship with his wife and children? How did your opinion of him change, and why?

5. Ellen reﬂects, “No one knows what goes on inside a marriage. I read that once; the aphorism ended ‘except for the two people who are in it.’ But I suspect that even that is not the truth, that even two people married to each other for many many years may have only passing similarities in their perceptions and their expectations” (p. 106). What do you think of this statement? How does it apply to George and Kate Gulden?

7. In reference to her father, Ellen says: “He divided women into groups . . . the intellectual twins, the woman of the mind and the one of the heart . . . I had the misfortune to be designated the heartless one, my mother the mindless one. It was a disservice to us both but, on balance, I think she got the better deal” (p. 281). Discuss the meanings, and implications, of these categorizations.

8. Discuss the reactions to Kate’s cancer diagnosis, and the progression of the disease, both within the Gulden family (Kate, Ellen, George, Brian and Jeff) and in their small town (the Minnies, etc). Were you surprised by any of the reactions? How and why?

9. Against Ellen’s wishes, Dr. Cohn sends Nurse Teresa Guerrero to help care for Kate. How does Teresa ﬁt in with the Gulden family? Do you agree with Ellen, when she thinks that Teresa helped her as much, if not more, than she helped Kate? How?

10. When Kate died, what did you think happened? Were you surprised to learn about the morphine overdose? Before you learned the truth, did you think it was Ellen, George, or Kate who had administered the lethal dose? Did you ever think it could have been an accident?

11. Mrs. Forburg, Ellen’s former English teacher, bails Ellen out of jail and lets her stay at her home during the indictment media frenzy. Why does Mrs. Forburg take such a risk?

12. Were you surprised by the grand jury’s decision? If you thought Ellen would or would not be indicted, explain why. Do you think the jury’s decision was realistic?

13. At the end of the novel, Ellen sees her father for the ﬁrst time in eight years. About the death of her mother, she says, “Someday I will tell my father. Someday soon, I imagine, although there is great temptation to leave the man I once thought the smartest person on earth in utter ignorance” (p. 287). Do you think Ellen will tell her father what happened? Why or why not? Would you, if you were in her shoes?

The Widower’s Tale
Julia Glass
Back to Top