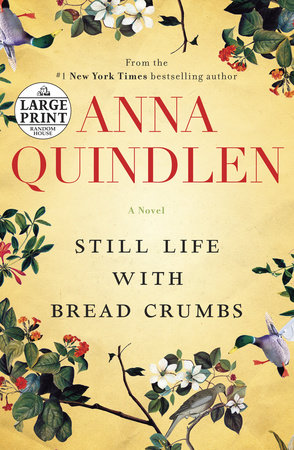 A Conversation Between Anna Quindlen and her Editor, Kate Medina

Kate Medina: Early readers have especially responded to a theme in Still Life with Bread Crumbs: changing your life at any age; starting again when you feel your life isn’t working. Would you comment on this?

Anna Quindlen: I’m actually not sure that’s how I saw the book when I began it, Kate, although, as you know, my motives aren’t always clear to me, in real time and in retrospect. I’ve always been in­terested in the notion of being pushed aside over time, maybe ­because I was once interviewed by a young(er) woman who ­introduced herself by saying, “I’m our paper’s Anna Quindlen!” In the case of Rebecca Winter, the protagonist of Still Life, the upside to her fall from the limelight is that she gets to figure out how to value herself rather than let the world do it for her. I think that’s the journey many women take, and since the value the world assigns to who you are and what you want is so often narrow and even unworthy, getting out of its clutches and into your own comfort zone can be really powerful.

KM: What does a woman want? is an age-­old, supposedly un­answerable question. I think Still Life with Bread Crumbs illuminates some answers to that question. We would love your thoughts!

AQ: Well, we could go on and on about that question, and the short snappy answer is that there are as many responses as there are women. But I do think that after a certain point, women seek authenticity. There’s an essential phoniness to the way we sometimes present ourselves, physically and socially—­wearing uncomfortable clothes that someone, somewhere, has deemed fashionable, being nice to people we don’t even like. How many times has someone said to me about their much older mother, or grandmother, “You wouldn’t believe what comes out of her mouth!” Maybe that’s a response to a lifetime’s worth of so-­called social graces.

KM: Still Life with Bread Crumbs is your seventh novel. You write both bestselling fiction and nonfiction. How are the processes different for you, if they are? How do you decide which one to write next?

AQ: I always mean to sound purposeful when we talk about things like that, but it’s all pretty unexamined and intuitive. My last nonfiction book, the memoir Lots of Candles, Plenty of Cake, came to life with an offhand comment I’d made to my daughter and a piece of data I stumbled across when writing my last Newsweek column. I’d been very satisfied writing novels, and I had no intention of moving back into nonfiction. Right now I’m juggling a novel in its nascent stages and a nonfiction book, as you know, and the most obvious difference is that on the first, I eventually plunged right into the writing, but on the second I’m still doing the reporting. Sometimes the reporting is an excuse not to write; other times it is such an aid to composition because, unlike the material in the novels, it is in your notes or on tape and doesn’t have to be excavated from the sometimes hard rock of imagination.

KM: People love to know where the inspiration for a novel comes from. Would you say something about Still Life with Bread Crumbs in this regard?

AQ: It’s not one thing. It’s never one thing. I’ve thought a lot about the nature of art, and why women’s art, particularly if it arises from domestic life, is minimized, or denigrated—­why, for instance, we pay less attention to the work of Alice McDermott, a genius miniaturist whose novels reflect the quiet everyday, than we do to the more sprawling, outward-­facing work of Philip Roth. Some of my thinking on that is embodied in Rebecca’s photography and the public’s reaction to it. I’m sixty-­one years old, and I’ve thought a lot about aging and the stages of a woman’s life, and that’s in there, too. From a purely mechanical point of view, I try to do some essential thing in each novel that I haven’t done before. In this book it was twofold: I’ve never written a love story, and I haven’t written a book with a happy ending, and this material lent itself to both.

KM: We’ve been working together for twenty-­five years, on a wide range of your books—­fiction, nonfiction, memoir. We are both often asked about the editorial process between writer and editor. Might you comment briefly about that process? What is the heart of it for you?

AQ: Oh, Kate, you broke me in. I cringe when I remember the first draft of Object Lessons. You said the writing was lovely, and the characters memorable, but not much happened in the course of the book. And I replied, “That’s how real life is.” You said, so sweetly, “And that’s why we call this a novel.”

The heart of the editing process is a fresh pair of sensitive and informed eyes. By the time I’m done with a draft, I have no clue. Is it the best thing I’ve ever done? Is it a complete disaster? Depends on which day you ask me. But more than that, I am so close to the material that I not only can’t get out of the weeds, I can’t figure out where they are. That’s where you come in. You read and read again and then send me your long memo, which always begins “I love this book!” Then come the buts—­about murky character development, fallow areas, missed opportunities. I’m not going to go into detail and thus illuminate my own dopiness, but sometimes you ask a question about something I’ve done, or failed to do, and I want to smack myself in the head, it’s so obvious.

Of course, a critical part of this process is the trust between us. You speak fluent Quindlen and you don’t try to edit me into someone else. And once our dialogue begins, I become more confident about my own work in that I know where you are right about changes, cuts, amendments, and where I disagree and will leave well enough alone.

KM: Rebecca Winter, the main character in Still Life with Bread Crumbs, is an artist—­a photographer. You are a different kind of artist—­a writer. What do you see as connections between the way Rebecca does her work, and the way a writer—­you—­do yours? What might be similar, or different, about creativity in different forms?

AQ: Certainly this is the part that will make readers and critics suspect autobiography in this novel. In her thirties, Rebecca becomes famous almost accidentally, through some photographs taken in her kitchen at the end of a dinner party. The work is hailed as feminist, deconstructed and described in terms of women’s household roles. None of this is Rebecca’s conscious intent. I had a somewhat similar experience when I created a column called “Life in the 30s” for The New York Times. I was writing about being stuck in the house with small children because I was stuck in the house with small children. It was not my intent to be a standard bearer for working mothers, just to get through toddlerhood while still earning some kind of disposable income. But I don’t think this means either Rebecca or I are accidental artists; I think art is accidental in many ways that are unacknowledged. Something . . . just . . . happens—­in the work and in some chemical reaction a viewer or a reader has to the work. A hugely esteemed novelist and I were talking one day about going on book tours. He growled, “The worst part is having to pretend you know why you do what you do.” I almost kissed him, I was so relieved that I wasn’t the only one who feels that way!

1. What part of Rebecca Winter’s life do you relate to the most? How did the way Rebecca handled her hardships compare to decisions you’ve made in your own life?

2. One of the themes of Still Life with Bread Crumbs is discovering how to age gracefully. What has been one of your biggest struggles when entering a different stage of life? What is something you’ve enjoyed?

3. Rebecca finds herself living far outside the comfort zone of her former New York City life. What do you think is the most difficult part of moving somewhere new? Have you ever been in a similar situation? How did you handle it?

4. At one point in the book, Jim says that he believes that people live in houses that look like them. How does your own house or apartment reflect your personality?

5. “Language had always failed her when it came to describing her photographs. . . . There was nothing she could say about the cross photographs that could come close to actually seeing them.” Rebecca realizes this after speaking at the Women’s Art League event. Do you ever find it difficult to describe the effect that art—photographs, paintings, writing—has had on you? What might that say about the power of artwork?

6. Throughout the book, Sarah is often the perfect antidote for Rebecca’s unhappiness. Do you have a person like this in your life? Think about one of the times that you were most grateful for him or her.

7. One of the turning points for Rebecca is when Ben tells her, “You will always be Rebecca Winter.” How has Rebecca’s personal identity become entangled with her identity as an iconic artist? What helps her to ground herself?

8. The dog gradually becomes a bigger part of Rebecca’s life as she moves further away from her past self—the “not a dog person” city girl. The dog pictures are even the catalyst for Rebecca’s break with TG. What do you think the presence of the dog means in Rebecca’s life, especially after she discovers his name is Jack? How might the constant company of an animal have a different effect from that of the company of people?

9. When Rebecca finally learns the meaning of the crosses, she wonders if the great artists had ever considered “the terrible eternity of immortality” for their subjects. We live in a culture of camera phones and constant photography. Was there ever a moment when you were particularly grateful to have a certain photograph? Do you ever wish that our lives were less documented?

10. O. Henry’s short story and the story of Rebecca’s mother’s Mary Cassatt both have a bittersweet quality to them. Think about a moment in your life that might have been upsetting or sad. Was there someone who helped you see beauty or happiness in that moment instead?

The Girl Who Chased the Moon
Sarah Addison Allen

The Silver Boat
Luanne Rice
Back to Top