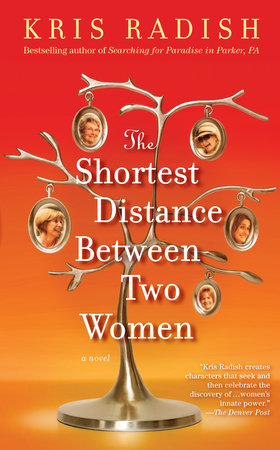 2.Out of the four Gilford sisters–Emma, Erika, Debra, and Joy–did you identify with one in particular? Which sister, and why? If you have sisters, how do you think author Kris Radish depicted the Gilford sibling’s relationships?

3.Kris Radish entitled each chapter of The Shortest Distance between Two Women with a question that also appears within the chapter itself. Did you like getting a sense of what was about to happen in each chapter before you read it, or would you have rather been surprised as events unfolded?

4.“Emma does know something simple. She knows when she is in her garden lying, standing, sitting, working, planting, walking through it all–her heart slows. Her breathing lengthens, and everything seems clear,” [page 39]. Talk about Emma’s garden, and how she retreats to it when feeling stressed. Do you have a sanctuary like a garden, or a different ‘escape hatch’ that helps you deal with life’s pressures?

5.Talk about the book’s opening chapter, “The First Question.” How does it set the stage for the rest of the novel? What was your initial impression of Emma?

6.Were you stunned to learn about how Samuel and Emma first met, and how they got to know one another? Did you think Debra’s rage at her sister was justified?

7.The specter of Louis Gilford’s death hangs over all the Gilford women. How did it affect each of the sisters and Marty? What did you think of Marty’s revelation to Emma regarding Louis’s calling as a gardener?


8.Emma often describes the Gilfords as a “wild” and “crazy” family–do you think that they were unusual in being so? What is a “normal” family, in your definition? Is there even such a thing?

9.The Gilford women operate under a sense of decorum, believing that there are times and places for certain behaviors, and certain things are better left unsaid. But one by one each woman drops her respective guard and starts speaking her mind. Which Gilford made the greatest strides toward expressing herself, no-holds-barred? What led her to this point?

10.“Emma stammers because she realizes Susie Dell has just told her the truth of female life,” [page 182]. Consider what Susie says to Emma at the end of Chapter 18. Do you agree that all women share the experiences she describes–that they are overwhelmed by family obligations, or wish they had made different choices in marriage and life, and more?

11.What did you think of the poem Stephie penned and presented at the beauty pageant [pages 322-323]? Emma offered her interpretation of it, but what do you think it meant? How did the poem fit into the book’s themes?

12.“And Emma gets up, walks purposely towards her kitchen trailing Marty’s white scarf like the fine tail of a kite, and heads directly toward the answering machine and the telephone that is sitting on top of it.” With this last line of The Shortest Distance between Two Women, what do you think happened next? Who did Emma call?