By Bino A. Realuyo 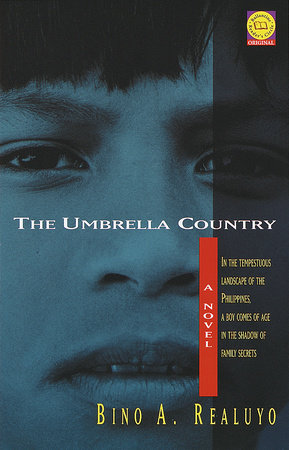 By Bino A. Realuyo

On the tumultuous streets of Manila, where the earth is as brown as a tamarind leaf and the pungent smells of vinegar and mashed peppers fill the air, where seasons shift between scorching sun and torrential rain, eleven-year-old Gringo strives to make sense of his family and a world that is growing increasingly harsher before his young eyes.

There is Gringo’s older brother, Pipo, wise beyond his years, a flamboyant, defiant youth and the three-time winner of the sequined Miss Unibers contest; Daddy Groovie, whiling away his days with other hang-about men, out of work and wilting like a guava, clinging to the hope of someday joining his sister in Nuyork; Gringo’s mother, Estrella, moving through their ramshackle home, holding her emotions tight as a fist, which she often clenches in anger after curfew covers the neighborhood in a burst of dark; and Ninang Rola, wise godmother of words, who confides in Gringo a shocking secret from the past–and sets the stage for the profound events to come, in which no one will remain untouched by the jagged pieces of a shattered dream.

As Gringo learns; shame is passed down through generations, but so is the life-changing power of blood ties and enduring love.

1.         Why do you think the author titled the novel The Umbrella Country? What metaphors were used in the novel for the author to decide on this title?

2.         Gringo’s family lived during Martial Law, one of the most repressive eras in Philippine history. How do you think the political situation of the times affected the characters’ view of the world around them?

3.         The novel offers an intense look at family life in the Philippines prior to immigration to the United States. Are these desires and dreams typical of future immigrants? Should countries in the "first world" keep their borders open to less developed countries? How are attitudes toward immigration changing in the United States and the world?

4.         The novel begins with the line, "It was the season of sun." Many chapters begin and end with images of the changing weather. How was climate used to describe situations and sentiments of the characters?

5.         What anxieties would Gringo and Pipo experience growing up without their mother? More and more, we are seeing single parent households; how is society dealing with these changing family structures? How do you think our definitions of "family" will change in the coming century?

7.         Sexuality and identity are important themes of the book. How did these differ between the male and female characters of the novel?

8.         The novel deals extensively with the adverse effect of homophobia on its young characters. How do you think attitudes about gays and lesbians have changed over the years? How does religion affect these attitudes?

9.         Names tell much about a family’s history. How did the author use names to reflect the characters, histories, and attitudes of the people? Share the origins of your family name and stories behind it.

10.         One of the most important passages in the novel is what Ninang Rola has said a few times, "Certain things are better kept than said." Do you agree with this statement? What are the ironies built around this statement in the novel?

11.         In the chapter "Querida Means ‘Dear,’ " the author gives a look at the life of "other women" in the Philippines. How is this different in your country?

12.         How would you compare and contrast the way Gringo and Pipo dealt with the world around them? Are there patterns that foretell the kind of future the brothers will have?

13.         The family in the novel eventually immigrated to the United States. How is your idea of immigrants affected by reading this novel? How is this novel different from other immigrant stories you have read?

14.         Explore the character of Boy Manicure. What do you think is his most significant contribution to the novel? Would the novel be any different without him?

15.         Do you think Ninang Rola made the right decision when she encouraged Germano to find and marry Estrella? Ninang Rola compares the situation to a "rock on a ring, never to be separated again." What are the positive and negative attributes to her statement?

16.         In one of the most memorable episodes in the novel, Pipo pushed Gringo away, saying "Run, Gringo, run," only to get himself hit by Daddy Groovie. What does this tell us about the character of Pipo, his inner strengths and weaknesses?

18.         Estrella is perhaps the most complex character in the novel. If you were Estrella, would you have stayed behind?

Bino A. Realuyo was born and raised in Manila, Philippines, and studied international relations in the United States and South America. He has finished a poetry collection, In Spite of Open Eyes, and is the editor of The NuyorAsian Anthology: Asian American Writings on New York City. Bino’s poetry and fiction have regularly appeared in The Kenyon Review, Manoa, New Letters, Puerto del Sol, The Asian Pacific American Journal, and The Literary Review. He has done readings at universities across the country, and was an invited poet at the Geraldine Dodge Foundation Poetry Festival in 1996 and a guest lecturer for literature at Yale University. He has received a Pushcart Prize nomination and the 1998 Lucille Medwick Memorial Award from the Poetry Society of America. Bino works full-time in the field of literacy and technology and also teaches survival English part-time to immigrant sweatshop workers. He is at work on a new novel and a second poetry collection. He lives in Manhattan. The Umbrella Country is his first novel.
Learn More About The Umbrella Country
print

Burning Down the House
Back to Top