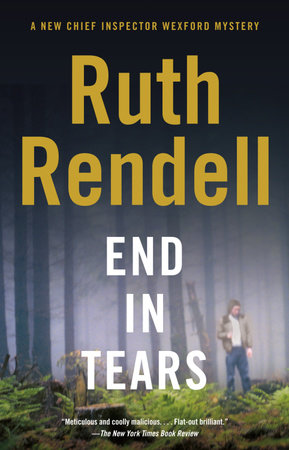 The introduction, discussion questions, author biography, and suggestions for further reading that follow are intended as a framework for your group’s discussion of End in Tears.

At first, there was no reason to link the killings. The first one, months earlier, seemed totally random: a lump of concrete pushed off an overpass onto a passing car. By contrast, the gruesome bludgeoning death of Amber Marshalson, returning home late from a night out clubbing with friends, was obviously calculated. The killer had been seen waiting for the girl in a nearby wood. But when Inspector Wexford discovers that Amber had been the driver right behind the crushed car—and that they were both driving Hondas, Amber’s silver and the other gray—he knows that someone wanted the teenager dead badly enough to kill twice to make sure they got the job done. And as it turns out, this murderer isn’t finished yet. But can Wexford unravel the complex knots that tie these murders together in time to save future victims? Or is he, as he begins to fear, losing his touch and fast becoming a relic of another time?

In End in Tears, internationally bestselling author Ruth Rendell delivers a taut mystery that takes off from the very first page with back-to-back murders and ends with one of Wexford’s own officers in mortal danger. Long-beloved by readers for her unique gift of weaving wonderfully meticulous characterization, humor, and thoughtful social commentary into intelligent and fast-paced plots, Rendell is at her very best in End in Tears. This is a gripping mystery that explores issues of class, race, parenthood, gender roles, and aging—a traditional British whodunit for the twenty-first century.

1. What do you make of the character of Inspector Wexford? What sets him apart from other literary detectives, and what aspects of his personality or approach to his job are reminiscent of characters you’ve encountered before?

2. Consider the relationships between couples that we see in this novel: Hannah and Bal, George and Diana Marshalson, John and Gwenda Brooks, Wexford and Dora, Naomi and Neil (and Sylvia). What common themes do you see in the way that Rendell portrays them? Who in this novel do you think has the healthiest relationship, and why?

3. At the opening of End in Tears, Wexford and Hannah are grating on each other’s nerves. Discuss this underlying conflict between them—his annoyance at her political correctness and her disapproval of his old-fashioned ways. Does this change throughout the course of the book? If so, how? Where else in the novel do we see this kind of generational divide?

4. Discuss the issue of class in modern-day England as it is portrayed in the novel. How do characters ascertain the status of the people around them? Which character is most aware of class differences? Which one is least aware of them? Does class play a role in the murders of Amber and Megan?

5. In explanation for the seemingly impossible belief of the women who paid for the “Miracle Tours” to Africa, Wexford states that:

I don’t think we, as men, will ever quite understand the longing some women, many women, have for a child. We hear talk about sex and self-preservation being the strongest of human instincts or urges. Maybe they are in men. In women the strongest can be a passion for a child of their own. Those women Norman Arlen deceived wanted to believe, they psyched themselves up to believe against all reason because each one of them wanted a baby of her own more than anything in the world. Ten thousand pounds apiece? Twenty? A child of one’s own would be cheap at that price. Fly to Africa, undergo an anesthetic, do something with passports you know in your heart must be illegal—all that is nothing as the price for having your own precious baby [p. 307].

What do you think of this? Can you understand how the longing for a child of her own could make a woman ignore her own better judgment and sign on for something like this, or is that suspension of disbelief too much for you? Can you think of any examples from current events or your own life where a person has gone this far in pursuit of something they desperately want?

6. What is your opinion of the relationship between Hannah and Bal? Do you think his attitude to their physical relationship is for the best in the long run, or do you think that he was being stupid about it? What, if anything, does each of them learn about themselves and each other in the process of sorting this out?

7. The issue of race is another that runs throughout the novel–what particular aspects of racial relations is Rendell commenting on? In what ways do you see race as a factor in the characters’ dealings with each other, and to what extent is it a nonissue? Which character is most preoccupied with race, and why?

8. What do you think of Sylvia’s choices? Why does she agree to carry the baby for Naomi and Neil? Did you think less of her when her true actions were revealed? What do you think the future repercussions will be for all involved—herself, Neil, Naomi, the baby, and her other children?

9. Discuss the author’s use of humor in End in Tears. Why do you think Rendell chooses to employ humor when and where she does? What effect does it have on the reading experience? Are there any places where a humorous comment or interlude led you to a deeper understanding of a character or plot point?

10. Did you catch on to the murderer(s) before Wexford solved the case? What clues did you as the reader have that the detectives were not privy to? Looking back, what signs did you catch or miss that would have pointed the way? Who did you suspect and why?

11. The plot of End in Tears unfolds against a background of extreme weather—from the sweltering heat of the week of Amber’s murder to the blinding snowstorm the night of Hannah’s near-death experience. Why do you think Rendell chooses to place the action of her novel in such extreme conditions—conditions that are for the most part unusual for the area in which the book takes place?

12. Consider the ways that parenthood is portrayed in the novel: Meg and Amber’s casual attitudes toward motherhood; the desperation of Naomi, Diana, and Gwenda; the fights born out of love and concern at the Wexfords; and the irritation and resentment between Cosima Hilland and her mother. We see a number of drastically different families and approaches to parenting. What conclusions did you draw about family relationships in the world of End in Tears? Who did you sympathize with and who did you dislike? In the end, does the traditional family structure hold up better or worse than the modern blended model that Hannah prefers to see? Does it make a difference?

13. On page 263, Wexford quotes Bertrand Russell as having said:

The fact that an opinion has been widely held is no evidence whatever that it isn’t utterly absurd. Indeed, in view of the silliness of the majority of mankind, a widespread belief is more likely to be foolish than sensible.

In what ways do you see this sentiment reflected in End in Tears? Beyond the Miracle Tour scheme, where else do we see widely held opinions that are in reality “utterly absurd”? Do you agree with this quotation? What do you think compelled Wexford to learn it by heart years ago?

14. Discuss the novel’s title. What does “end in tears” refer to or signify?

Ruth Rendell has won numerous awards, including three Edgars, the highest accolade from Mystery Writers of America, and three Gold Daggers, one Silver Dagger, and a Diamond Dagger for outstanding contribution to the genre from England’s prestigious Crime Writer’s Association. She lives in London.

A Judgement in Stone
Ruth Rendell

The Babes in the Wood
Ruth Rendell

Not in the Flesh
Ruth Rendell

One Across, Two Down
Ruth Rendell

The Locked Room
Per Wahloo and Maj Sjowall

Deception on His Mind
Elizabeth George

The Man on the Balcony
Maj Sjowall and Per Wahloo

The Shape of Snakes
Minette Walters

A Place of Hiding
Elizabeth George

What You Break
Reed Farrel Coleman

An Unsuitable Job for a Woman
P. D. James

In the Presence of the Enemy
Elizabeth George

The Fire Engine that Disappeared
Maj Sjowall and Per Wahloo

Things My Girlfriend and I Have Argued About
Mil Millington

Freedomland
Richard Price
Back to Top