The Story of Forgetting Reader’s Guide 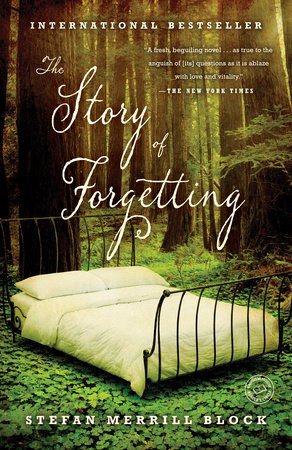 The Story of Forgetting Reader’s Guide

1. The last words of The Story of Forgetting are “whatever she needed she had only to imagine.” Why do you think the author chose to end the book this way? In what ways is imagination essential
for the book’s main characters?

2. What is the relationship between the fables of Isidora and the rest of the book? How are situations, characters, and feelings from the lives of the Haggard family transformed in these fables? What
is the importance of this storytelling tradition to the Haggard family?

3. What traditions do you keep that help maintain your own family’s identity? How do your traditions relate to your family’s history?

4. In one of the Isidora fables, a group of elders wonders, “To remember nothing . . . what more could one possibly ask of eternity?” (p. 201) Despite the horrors of Alzheimer’s disease, are there ways in which its most well-known symptom, memory loss, is liberating for some of the characters in this book? In certain instances, might it be better to forget?

5. By the end of The Story of Forgetting, Jamie appears desperate to return to her childhood home. Do you think she would have still felt this need if she hadn’t developed Alzheimer’s disease? Was it
only after she had forgotten the reasons she had left, and her guilt over abandoning Abel, that she could return? Or do you think that she would have tried to return eventually, even if her memory had
not failed?

6. n the section titled “Genetic History, Part 4,” the author, describing Paul’s unceasing love for Jamie Whitman, asks if love is “strong enough to gird Memory, at least for a time, against Chance’s inevitable progression” (p. 243). How is love stronger than memory loss in this book? How is it not?

8. Before Seth and Abel know of each other’s existence, they are already linked by their family’s two legacies: the stories of Isidora and the devastation that the EOA-23 gene has wrought upon their loved ones. What else do Seth and Abel have in common?

9. The Story of Forgetting is written in a number of voices, genres, and time periods. Why do you think that the author chose to tell the story this way? How does this style of writing relate to the themes of memory, storytelling, family, and the quest for understanding?

10. Reflecting upon his decision to tell his daughter the truth about his affair with Mae, Abel understands that “out of the possibility of my wrongness in that single moment, I would serve a lifetime of penitence, loneliness, and regret” (p. 264). Do you think that it is strictly guilt that compels Abel to spend twenty years as a recluse? Do you think he really believed, twenty years after the fact, that his daughter would ever come back to him?

11. If you were in Jamie’s position, would you tell your child the truth of his family’s genetic legacy, of the 50 percent chance that he has also inherited a devastating terminal disease? Might it be better for the child not to know the truth? If you were in Seth’s position, aware of the possibility that you had inherited the gene, would you get tested for it?

12. How does the genetic history of the EOA-23 variant illuminate the story that takes place in the present tense? How do the scientific details in these genetic-history chapters change your understanding of the book’s characters and their conditions?

14. Describing his mother’s death by Alzheimer’s disease, Abel says, “Her old soul had not so much vanished as eroded, worn away by a million rubs. I stopped praying” (p. 182). How does Alzheimer’s disease complicate or obscure the concepts of death and selfhood?

Learn More About The Story of Forgetting
print

The Intervention of a Good Man
Hervé Le Tellier

Church of the Dog
Kaya McLaren

The Clearing
Tim Gautreaux
Back to Top