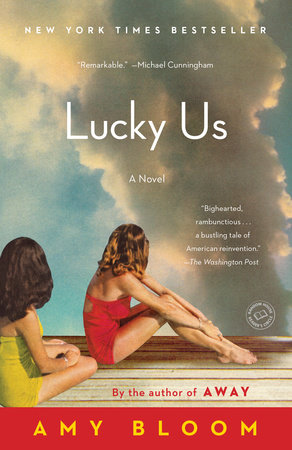 Lucky Us, Bloom’s first novel since Away, tells the story of Eva and Iris, two sisters who meet as adolescents in the 1940s and, together, seek fame and fortune.

Publishers Weekly: Where does the title come from? After all, in some ways, the characters aren’t so lucky.

PW: The chapter titles are all taken from titles of songs from the 1930s and 1940s. Why did you name the titles after song titles?

AB: Music plays such a big part in the lives of the characters: Eva was brought up by a mother who listened to the radio, Edgar and Clara are very engaged with music, Iris becomes so as well. Music was such a national language of that period, because of radio. So many people listened attentively to music . . . it was such a deep communicator. Although not everybody listened to all the same music, it was a much broader river that included far more people than music does now.

PW: Gus, who is an American citizen of German ancestry, is interned during World War II. Was this based on historical research that you did?

AB: I usually don’t have to do a lot of research in my work, as I’m writing about something I’m already familiar with. But for this, I did a lot of reading. I was reading first–person accounts of ordinary people’s lives in World War II, and I came across this description of a young teenager whose German parents were interned. I thought it was so interesting, and I had not heard of it before.

PW: The novel is about two sisters who are very close, but whose relationship is somewhat fraught. Do you have a sister? If so, was the novel inspired by your relationship with her?

AB: I do have a sister. I have never written much about sisters before. I am very close to my sister, but, maybe, because we are very close, it never occurred to me to write about her. There’s about the same age gap between us as there is between Iris and Eva. There have been moments in my life when my sister’s support or advice was tremendously helpful, and there have been moments when it wasn’t. [In writing Lucky Us] I was interested in a relationship that really mattered, but as you say, is not without bumps.

PW: You were trained as a psychotherapist before becoming a writer. What impact does this have on your writing?

AB: It’s a great gift. It was the training: to listen, to observe. Those skills are very much what you need as a writer. Keep your mouth shut and see what’s happening around you. Don’t finish people’s sentences for them. Don’t just hear what they say, but also how they behave while they’re saying it. That was great training for writing.

1. The day that Eva’s mother leaves her at her father’s house is the day that Eva loses one family and starts another. Have you ever been in a place where you have had to create a new family around yourself? What were some of the best parts? The worst parts?

2. Edgar’s mother once told him, “It’s good to be smart, it’s better to be lucky.” What do you think about that statement after finishing the novel? If you had to choose, would you rather be lucky or smart?

3. Iris’s ambition is what sets Eva and Iris on the road at the beginning of the novel. How does Eva’s ambition differ from Iris’s? Which sister, do you think, is more successful?

4. Eva and Iris find themselves having to constantly reinvent their identities as they travel around America. Has there ever been a time when you’ve reinvented yourself? Was it difficult to do?

5. Though so much of the novel focuses on Iris’s search for love, the relationship between Eva and Gus also becomes a central pillar. What do you think of their love for each other? How does their relationship compare with Iris’s experiences?

6. At one point, Eva says, “I looked for mothers the way drunks look for bars.” Do you think Eva ever found her mother figure? If so, who was it? If not, what family figures did she create instead?

7. Iris writes to Eva about memory: “I remember some things at a gallop, some moments from Ohio bearing down upon me in huge detail, and other things that are no more than small leaves floating on a stream. Memory seems as faulty, as misunderstood and misguided, as every other thought or spasm that passes through us” (p. 97). Do you think Iris is right about memory here? How do memory and forgiveness tie into each other?

8. Who was your favorite addition to Iris and Eva’s family and why? Francisco? Clara? Danny? Gus?

9. Each chapter is titled with song lyrics from the period, evoking the richness of the music during that era. What connection do you find between music and reading? How can music add new dimensions to a story?

10. The adventures of the novel begin after a few photographs on a beach surface. The novel ends with another photograph on a beach. How have the roles of Eva and Iris changed since then, and how has the role of photographs changed? Can a photograph ever fully capture a moment?

Learn More About Lucky Us
print

The Truth According to Us

The Tin Horse
Back to Top