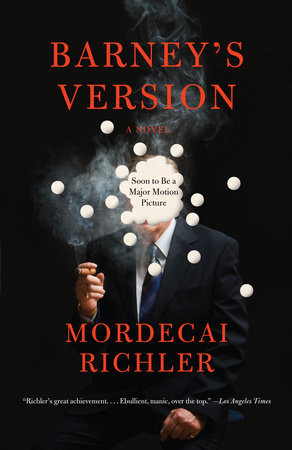 The questions, discussion topics, and reading list that follow are intended to enhance your reading group’s discussion of Mordecai Richler’s hilarious novel, Barney’s Version, which is soon to be a major motion picture.

Barney Panofsky—Canadian expat, wily lover of women, writer, television producer, raconteur—is finally putting pen to paper so he can rebut the charges about him made in his rival’s autobiography. Whether it’s ranting about his bohemian misadventures during the 1950’s in Paris, his tumultuous three marriages, or his successful trashy TV company, Totally Unnecessary Productions, he quickly proves that his memory may be slipping, but his bile isn’t. But when he’s charged with the murder of his own best friend—caught in bed with the second Mrs. Panofsky—Barney’s version of things might not be enough to keep him out of trouble.

1. Discuss the title, Barney’s Version. To what do you think it is referring?

2. What are the major differences in Barney’s life between each of the memoirs? Do you think that the women for which each section is named has an impact on his life? Why do you think the novel is structured in this way?

3. What attracts Barney to his second wife? Why do you think he never gives her name, referring to her only as “Mrs. Panofsky”?

4. Is Barney a likable character despite his various negative qualities? Why or why not?

5. Barney says, “Never tell the truth. Caught out, lie like a trooper.” Does this make the novel more or less ironic? Because of this belief, is Barney an unreliable narrator? Do you think any “memoir” is truthful, since it is inevitably based on memory?

6. The novel is punctuated by footnotes written by Michael, Barney’s son.  What do these footnotes reveal about Michael’s character? Why do you think he decided to annotate his father’s memoirs?

7. Despite truly loving Miriam, his final wife, Barney still cheats on her. Why do you think he does this? What about his character drives Barney to such destructive and hurtful actions?

8. When Michael asks Barney’s lawyer if his father had murdered Boogie, the lawyer simply tells him: “The truth is he was your father.” Can you explain what he meant by this cryptic answer?  Was Barney really guilty?

9. Near the end of the novel, Michael explains Barney’s philosophy: “Life was absurd, and nobody ever truly understood anybody else.” Do you take this as being ironic or sincerely his belief?  How does the final scene of the book influence your answer?

10. Of our contemporary satirists, Mordecai Richler is considered one of the greatest.  What about this book is satirical and what or who is his target?

11. In part, Barney’s Version, talks about becoming older and eventually dying.  How does Barney approach both?  Is his approach positive or negative?

Mordecai Richler was born in Montreal in 1931.  Among his most successful novels are The Apprenticeship of Duddy Kravitz, St. Urbain’s Horseman, Solomon Gursky Was Here, and Barney’s Version. He died in 2001.

The Boat People
Back to Top