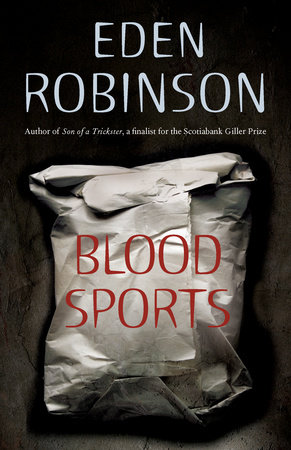 1. Eden Robinson has referred to Blood Sports as a contemporary retelling of Hansel and Gretel — the original, ultra-gory version of the tale. In what ways, if any, do you find Robinson’s novel to be similar (in form, for instance, or in its underlying view of the world) to the traditional fairy tale?

2. Blood Sports is packed with references to popular culture — from brand-name products to street slang to characters who might have appeared in a tv detective show. Does this affect the book’s status as a literary novel? Does serious fiction have an obligation to be lofty, or should we applaud Robinson for attempting to capture contemporary textures in her work?

3. The novel’s opening section is presented in the form of a letter that Tom writes to his daughter some time — possibly years — after the events in the rest of the book have taken place. Why do you think Robinson chose this strategy of, in a sense, beginning with the ending? How did this affect your reading of the ensuing story?

4. Jeremy is a deeply troubling character — a homicidal master criminal — and yet he is both charming and hugely successful, at least in material terms. Is this purely a cartoon, or on some level a reflection of real life?

5. From the book’s earliest sections — like the chapter in which Tom and his family get a portrait taken at a Wal-Mart photo studio — family is front and centre. What do you think the book is saying about the role of family in our lives? Is Tom misguided in clinging to the idea of family as a source of meaning, even as his family relationships seem on the verge of destroying him?

6. Eden Robinson comes from an aboriginal background. She is Haisla, and currently lives in her ancestral village in northern British Columbia. Keeping this in mind, does it surprise you that much of her work — Blood Sports included — focuses on non-native Canadians living in urban settings? Should it?

8. What do you make of Tom’s behaviour over the course of the novel? Is he a decent person who finds himself in the wrong place at the wrong time, or is he somehow complicit in the mayhem that follows him wherever he goes?

9. In something of a departure from her previous work, Robinson has written Blood Sports in a patchwork of different styles and voices — including standard narrative, script format, a letter, and so on. There are also several sudden jumps backwards and forwards in time. Why do you think she chose to write the book in this way, and how might the experience of reading it have been different if she’d used a more conventional
structure?

10. Robinson has said that she often thinks of the situations she writes about — even many of the violent and troubling ones — as being, on some level, comical. Did you find yourself chuckling at any uncomfortable moments while reading Blood Sports? If so, what do you think is the significance of this kind of humour, and is it “healthy”?

11. On the surface, Blood Sports doesn’t seem to have much in common with most well-known Canadian novels — though Robinson says she’s a voracious reader of Canadian fiction. How is this book different from, and similar to, other Canadian novels you’ve read? Do you think that the concepts of CanLit, and of Canadian identity in general, are useful when discussing a work like this?

12. In interviews, Robinson has mentioned that she watches a lot of movies, and that she’s been influenced somewhat by contemporary directors like David Cronenberg. In what ways, if any, do you see the influence of film in Blood Sports? Conversely, in what ways is Blood Sports distinctively bookish and un-movie-like? Could a story like this ever be filmed?

13. “Hate is everything they said it would be and it waits for you like an airbag.” Is the sentiment expressed in the novel’s epigraph (quoted from a book of stories by Canadian author Mark Anthony Jarman) confirmed by the story as a whole?

14. Blood Sports is a sequel to an earlier novella of Robinson’s, “Contact Sports,” which describes Tom, Jeremy, and some of the novel’s other characters at an earlier period in their lives. Recently, Robinson has said that she has considered writing yet another story about these characters. What might happen in a sequel to Blood Sports, and why do you think these particular characters hold so much allure for the author?

The Game of Cards
Adolf Schroder

The Best War Ever
Sheldon Rampton and John Stauber

What We Do Is Secret
Thorn Kief Hillsbery

The Things We Do to Make It Home
Beverly Gologorsky

Six Concepts for the End of the World
Steve Beard