I Married a Communist Reader’s Guide 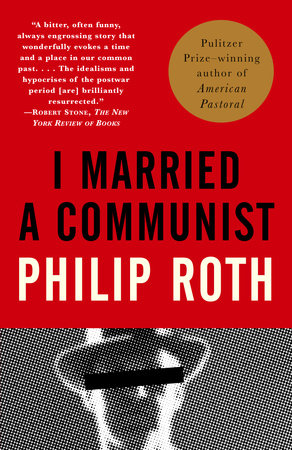 I Married a Communist Reader’s Guide

The questions, discussion topics and suggested reading list that follow are intended to enhance your group’s reading of Philip Roth’s I Married a Communist. We hope they will provide you with many new ways of approaching this powerful novel of private rage, public betrayal, and historical reflection by one of America’s greatest writers.

Ira Ringold grew up a Newark roughneck, blighted by a violent history from which he is always in flight. During his service in World War II, though, he comes under the tutelage of a dedicated Communist, who makes him passionately political, newly committed to changing the world. After the war Ira, now known by his stage name Iron Rinn, finds success as an actor in liberal-left radio dramas, and becomes a national celebrity when he marries the consummately lovely and glamorous star Eve Frame.

But their romantic idyll in Eve’s tasteful Greenwich Village house soon degenerates into a bitter, recriminatory fiasco as Ira, Eve, and Eve’s daughter Sylphid act out an ugly family drama. As an outspoken leftist, Iron Rinn has long been under suspicion by the Communist-hunters in the government. And when his marriage descends into its final disaster, the furious and narcissistic Eve takes her revenge with a histrionic public revelation of her husband’s life of "espionage" for the Soviet Union. Set in the heart of the McCarthy era, I Married a Communist is a brilliant fictional rendition of the way in which private acts can warp and pervert public life. The story of Iron Rinn’s dramatic rise and fall—told by his brother Murray, himself a victim of the McCarthy trials, to Roth’s fictional alter-ego Nathan Zuckerman—is American tragi-comedy as only Philip Roth can write it: fierce and funny, thoughtful and acute.

1. As Nathan’s high school English teacher, Murray Ringold tells him that "In human society, thinking’s the greatest transgression of all" [p. 2]. Do the events of his life, and his brother’s, bear out this opinion?

2. Murray describes Ira’s private life as "a grave misfortune replete with farce" [p. 3]. Would this describe his public life as well? Which aspects of his public life were tragic, which merely farcical? How are Ira’s private and public lives inextricably linked? What about Eve’s? How does Roth link private betrayal with the public variety?

3. Ira becomes famous by impersonating Abraham Lincoln; he dies, eventually, from the same rare disease Lincoln suffered from. Why does Roth stress similarities and parallels between Ira and Lincoln? What things does he imply about Ira by making the comparison? Does Ira have any justification in likening himself to American revolutionaries like Lincoln, Paine and Jefferson?

4. The young Nathan, enthusiastic about the Progressive Party, sees his father as someone who has made fatal compromises, and Ira as uncompromising. What compromises has Ira, in fact, made? Does the author imply that compromise is inevitable, even good and necessary? If so, do you agree with him?

5. Nathan is attracted by Ira’s early orphaning, by his social and familial unrootedness, largely because he himself is so very rooted in his own family and culture. What effect does a father, or the lack of a father, have on a young man’s life? What purpose do surrogate fathers serve? Is Nathan correct to define manhood as "the orphanhood that is total" [p. 217]?

6. "As a Communist," says Murray, "[Ira] should be irritated by her from the first second. So what explains this marriage with her and not with a comrade?" [p. 82]. What does explain it? Does the fact that Ira sees Eve as a "challenge" [p. 83] provide reason enough, or is the situation more complex than that?

8. Ira presents himself as a searingly honest man, and seems actually to believe that this is so. Yet he consistently lies about the two vital facts of his life: that he is a Communist, and that he is a murderer. Does your knowledge of these lies imply, to you, that he is dishonest about other things? That he is in fact dishonest by nature?

9. Several characters give blistering summaries of Ira as they perceive him. Katrina van Tassel calls him "an ignorant man, and a naive man, and a rude man, a bullying, simple-minded, arrogant man" [p. 149]; his former friend Goldstine says "Mankind at its stupidest doesn’t come any stupider. I’ve always been scared of you. You’re a wild man" [p. 97]; Johnny O’Day says "He wasn’t a revolutionary, he wasn’t a Lincoln, he wasn’t anything. He wasn’t a man" [p. 288]. Are these characterizations correct? Or are they too ruthless in their assessments? What valuable qualities does Ira possess, if any? Is he in fact, as Murray believes, "by and large," "virtuous" [p. 181]?

10. How did Ira’s childhood experiences turn him toward violence and murder? How, afterward, did his murder of Strollo shape the rest of his life? Murray says that Ira’s "whole life had been looking for a way not to kill somebody" [p. 292]. Into what other arenas does Ira deflect his violent impulses? At what times is his violent nature most in evidence?

11. Do you agree with Nathan that both Ira and Murray are "historical casualties" [p. 318]? What does he mean by that term? How might their lives have unfolded if they had lived in more peaceful times?

12. "I believe I have made the least harmful choice," Nathan says about his chosen way of life [p. 71]. Harmful to what, and to whom? Are there any clues in I Married a Communist, or in Roth’s other novels, to indicate why Nathan lives in such a monastic fashion?

13. Iron RinnIra Ringold was the teenaged Nathan’s hero. What does this imply about our youthful ideas of heroes? Who, if anyone, might be the real hero of this story? Of the historical era?

14. If you have read American Pastoral, the novel that preceded I Married a Communist, how would you compare the two "heroes," Swede Levov and Ira Ringold? Are the two men similar, and if so, in what ways? How innocent is each of them, and how guilty? To what degree are both utopianists, and how realistic are their utopias?

15. What does I Married a Communist tell us about ourselves as Americans: about specifically American mores, values, fantasies, and character? In what ways were HUAC and the MacCarthy crisis characteristically American phenomena, possible only in this country?

One of Ours
Willa Cather

The Heart Is a Lonely Hunter
Carson McCullers