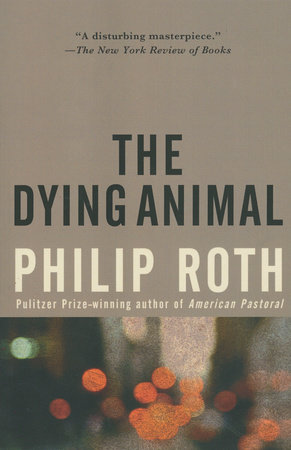 “A disturbing masterpiece.” —The New York Review of Books

The introduction, discussion questions, suggested reading list, and author biography that follow are designed to enhance your group’s discussion of Philip Roth’s The Dying Animal. We hope they will deepen and broaden your understanding of one of Roth’s most brilliant characters, David Kepesh, and the story he tells in this complex and powerful novel.

“A man,” says David Kepesh, “wouldn’t have two-thirds of the problems he has if he didn’t venture off to get fucked. It’s sex that disorders our normally ordered lives” [p. 33]. And no life was more ordered than Kepesh’s. Unmarried, unobligated, unattached, Kepesh lives just the way he wants to, confidently detached from what he views as illusions about romantic love, conventional pieties, and prevailing mainstream models of normalcy. Until he meets his beautiful student Consuela Castillo. Her breasts, her vagina, her hair, her skin, her youth, her clothes, her physical poise and emotional composure, her erotic self-assurance, her Cuban bourgeois background—taken together, everything Consuela is disarms this thinking man. Sustained virtually into his seventh decade by the orderly pursuit of pleasure in life and the arts, this master strategist of freedom is consumed by sex in its most anguishing form, undone for the first time ever by the monster of possessive jealousy.

Now eight years have passed since Consuela left him, the twentieth century has ended in a paroxysm of kitsch and unfulfilled apocalyptic fear, and David Kepesh is seventy, his prodigious erotic career nearing its own end. But he is spellbound by the memory of Consuela and the unmanageable passion that she inspired. The Dying Animal is his candid telling of their story, intermixed with thoughtful excursions into the pertinent subjects that come within the ken of his capacious mind—sexual jealousy, the sexual revolution, the turbulence of the sixties, the cage of family life, pornography, the American Puritan theocracy—and subjects like aging and dying that pertain to his immediate predicament. Who he is recounting his story to isn’t fully disclosed; one only knows that Kepesh is speaking meticulously and at length to someone in the room with him, either a woman or a man, who occasionally questions or comments on his story and who issues an ominous warning on the book’s final page when Consuela, seriously ill, is about to enter a hospital and Kepesh is confronted with a fateful choice about the resumption of their affair.

The third novel in the Kepesh series, The Dying Animal is both a tour de force of self-revelation and a brilliant reckoning of the full range of consequences, in one man’s life, of the sexual revolution.

1. To begin, answer these questions using the book as your guide. Read aloud the relevant sentences or passages.
a. Why is Janie Wyatt Kepesh’s hero [pp. 48–58]?
b. Why is Caroline Lyons Kepesh’s lover [pp. 46–48, 69–76]?
c. Why does Miranda stay behind after the party [pp. 7–9]?
d. Why does Elena Hrabovsky come to Kepesh when she’s unhappy about her life with men? What is Kepesh’s response to her unhappiness [pp. 107–110]?
e. Why is Kepesh’s description of Consuela’s vulva so detailed [p. 103]? Why the aquatic and artistic references? What human emotion informs this passage?

2. What are the sources of pleasure in Consuela Castillo and David Kepesh’s relationship? What do they offer each other? What allows each to “master” the other? Describe Consuela.

3. Why does Kepesh become obsessively jealous? Do his pleasure and jealousy derive from the same source?

4. What is the place of music in Kepesh’s life? What about books?

5. After Consuela leaves Kepesh, his friend the poet George O’Hearn warns him to stay away from her: “This is the pathology in its purest form. . . . You violated the law of aesthetic distance. You sentimentalized the aesthetic experience with this girl—you personalized it, you sentimentalized it, and you lost the sense of separation essential to your enjoyment” [p. 99]. Why would George suggest, and Kepesh be receptive to, the notion that sexual relations be governed by aesthetic laws?

6. Kepesh agrees with George that “attachment is ruinous,” finds those who voluntarily give up their freedom “ridiculous,” and feels that “marriage at its best is a sure-fire stimulant to the thrills of licentious subterfuge” [p. 111]. His son Kenny, who struggles to make his own marriage work, accuses him of gross irresponsibility, of confusing sexual freedom with vulgar self-interest, of behaving like a lecherous fool. Does the novel resolve these conflicting points of view? Does it endorse one position over the other or simply bring them into clarifying opposition?

7. Why doesn’t Kepesh’s son Kenny listen to his father? Is Kepesh not giving Kenny good advice?

8. In what ways is The Dying Animal about the intersection of America’s cultural history with David Kepesh’s personal history? How does he interpret the sixties? How does the sexual revolution “revolutionize” his life? What does it cost him?

10. Why does Roth include the extended section on George O’Hearn’s death? What is the motive behind O’Hearn’s final desperate attempt to undress his wife [pp. 121–3]?

11. How does Consuela’s illness abolish the age difference between her and Kepesh?

12. Even though its last word is “finished,” and even though its final pages are filled with anxiety about death, The Dying Animal is open-ended. Why does Roth choose to close the book in this way? What is likely to happen to David Kepesh? Will he ignore his listener’s warning and go to Consuela? If so, will it be the end of him?

The Floating Opera and The End of the Road
John Barth

Blood on the Forge
William Attaway

Come Along with Me
Shirley Jackson
Back to Top