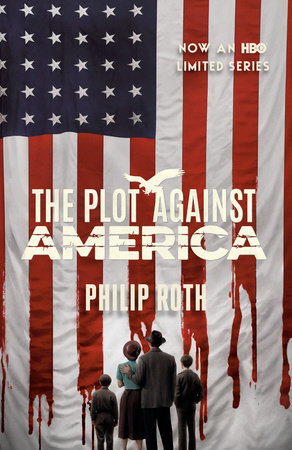 The introduction, discussion questions, and suggestions for further reading that follow are designed to enhance your group’s discussion of Pulitzer Prize winner Philip Roth’s extraordinary new novel, The Plot Against America. Set in Newark, New Jersey, in the early 1940s, The Plot Against America tells the story of the Roth family and Jews across the country when the isolationist aviation hero Charles Lindbergh is elected president of the United States.

Roth’s richly imagined novel begins in 1940, with the landslide election of Lindbergh, who blamed the Jews for pushing America toward war with Nazi Germany. Lindbergh’s admiration of Hitler and his openly anti-Semitic speeches cause increasing turmoil in the Roth household, and in nine-year-old Philip, as political events at home and abroad overtake their daily lives. Alvin, the orphaned nephew the family has taken in, runs away to Canada to fight the Nazis. Sandy, Philip’s older brother, ascribes his parents’ fears to paranoia and embraces Lindbergh’s Just Folks program, which sends him and other Jewish children to live in the “heartland” for a summer. Philip’s mother, Bess, wants the family to flee to Canada before it is too late to escape. But his fiercely idealistic father, Herman, refuses to abandon the country where he was born and raised as an American. Overwhelmed by the tensions around him, Philip tries to run away. “I wanted nothing to do with history,” he says. “I wanted to be a boy on the smallest scale possible. I wanted to be an orphan” [p. 233]. But history will not let go, and as America is whipped into a deadly frenzy by demagogues, the Roths and Jews everywhere begin to expect the worst.

In The Plot Against America, Philip Roth writes with a historical sweep and lyrical intimacy that have rarely been so skillfully combined. As the novel explores the convulsive collision of history and family, readers take a chilling look at devastating events that could have occurred in America—and consider the many possible histories existing beneath the one that actually happened.

1. In what ways does The Plot Against America differ from conventional historical fiction? What effects does Roth achieve by blending personal history, historical fact, and an alternative history?

2. The novel begins “Fear presides over these memories, a perpetual fear” [p. 1]. With this sentence Roth establishes that his story is being told from an adult point of view by an adult narrator who is remembering what befell his family, over sixty years earlier, when he was a boy between the ages of seven and nine. Why else does Roth open the novel this way? What role does fear play throughout the book?

3. How plausible is the alternative history that Roth imagines? How would the world be different if America had not entered the war, or entered it on the side of Germany?

4. When the Roth family plans to go to Washington, young Philip wants to take his stamp collection with him because he fears that, since he did not remove the ten-cent Lindbergh stamp, “a malignant transformation would occur in my absence, causing my unguarded Washingtons to turn into Hitlers, and swastikas to be imprinted on my National Parks” [p. 57]. What does this passage suggest about how the Lindbergh election has affected the boy? Where else does this kind of magical thinking occur in the novel?

5. Herman Roth asserts, “History is everything that happens everywhere. Even here in Newark. Even here on Summit Avenue. Even what happens in this house to an ordinary man—that’ll be history too someday” [p. 180]. How does this conception of history differ from traditional definitions? In what ways does the novel support this claim? How is the history of the Roth family relevant to the history of America?

6. After Mrs. Wishnow is murdered, young Philip thinks, “And now she was inside a casket, and I was the one who put her there” [p. 336]. Is he to some degree responsible for her death? How did his desire to save his own family endanger hers?

8. When Herman Roth is explaining the deals Hitler has made with Lindbergh, Roth comments, “The pressure of what was happening was accelerating everyone’s education, my own included” [p. 101]. What is Philip learning? In what ways is history robbing him of a normal childhood? Why does he want to run away?

9. What motivates Rabbi Bengelsdorf, Aunt Evelyn, and Sandy to embrace Lindbergh and dismiss Herman Roth’s fears as paranoia? Are they right to do so? In what ways do their personal aspirations affect their perceptions of what is happening?

10. In what ways are Bess and Herman Roth heroic? How do they respond to the crises that befall them? How are they able to hold their family together?

11. Roth observes that violence, when it’s in a house, is heartbreaking: “like seeing the clothes in a tree after an explosion. You may be prepared to see death but not the clothes in a tree” [p. 296]. What causes Herman Roth and Alvin to fight each other so viciously? What is it that brings the violence swirling around them off the streets and into the house? Why is violence in a home so much more disturbing than on the street or the battlefield?

12. Much is at stake in The Plot Against America—the fate of America’s Jews, the larger fate of Europe and indeed of Western civilization, but also how America will define itself. What does the novel suggest about what it means to be an American, and to be a Jewish American? How are the Roths a thoroughly American family?

13. What does the postscript, particularly “A True Chronology of the Major Figures,” add to the novel?

A Brief History of Seven Killings
Marlon James
Back to Top