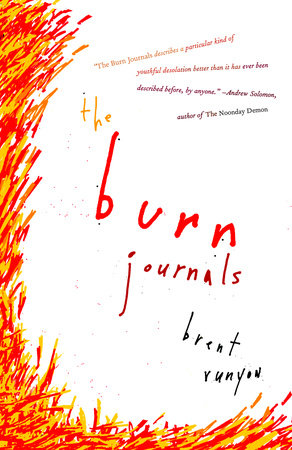 “The Burn Journals describes a particular kind of youthful male desolation better than it has ever been described before, by anyone.” –Andrew Solomon, author of The Noonday Demon

The introduction, discussion questions, suggestions for further reading, and author biography that follow are designed to enhance your group’s reading and discussion of Brent Runyon’s The Burn Journals, the provocative, raw, and unsparing account of Runyon’s long journey back to teenage life after a botched suicide attempt leaves him physically and emotionally shattered.

To fourteen-year-old Brent Runyon, life has become a haze of small failures. He hates himself for liking the same girl his best friend likes. His recent suicide attempts–sliced wrists, handfuls of pills, hangings–have left him very much alive and feeling stupid. And now the threat of disciplinary action by the principal looms large, ever since Brent set a school locker on fire just for the hell of it. There seems to be no choice but to do something from which he can’t turn back, something that will amend for all the bad things he’s done, all the pain he’s caused everyone. After seventh period one day, he says good-bye to a few friends, takes the bus home, chats with his brother in their driveway, then steps into the shower, puts on a gasoline-doused bathrobe, and lights a match.

The Burn Journals chronicles Brent’s harrowing recovery, from the fragmented reality of his months spent in the burn unit of a Washington, D.C., children’s hospital, to the tedium of full-time physical and psychological rehabilitation, and finally to his unsettling return home, where his old life awaits him, both gratifyingly familiar and terrifyingly foreign. Written in the dispassionate style of a young teen barely able to grasp his own complex web of emotions, this memoir offers an explicit, honest, and painfully unsentimental portrait of remorse and hope. As Brent struggles to convey to his parents–and to himself–his reasons for wanting to die, he slowly pieces together a tenuous but viable blueprint for wanting to live again.

1. This memoir is unique in that Runyon chooses not to annotate his account from an adult perspective but rather to let his fourteen-year-old voice stand alone. How does this lack of analysis and retrospective insight shape the narrative? What effect does the detached, primitive, sometimes belligerent nature of this teenage voice have on the story?

2. Brent’s description of his mother’s eyes moments after the disaster–“her eyes . . . are the most beautiful things I’ve ever seen” [p. 18]–echoes studies on newborns’ reactions to their mothers’ eyes moments after birth. To what extent is Brent’s suicide an attempt to revert to an infantile state in which he will be unconditionally loved? Are all suicides overtures toward rebirth?

3. How does Brent’s nebulous adolescent understanding of his own sexuality play into his depression? Do his thwarted attempts at intimacy with women and girls read as comical or disturbing? Does he mature in this area over the course of the memoir?

4. Brent recounts several episodes that seem to suggest a lack of sensitivity on the part of his parents to his violent tendencies, even after his release from rehab. In one, his father employs Brent’s reluctant help in bludgeoning a possum to death. In another, his father buys Brent boxing gloves and allows Brent to knock him to the ground. In a third, Brent ponders his childhood practice of mutilating toys, a habit obviously unnoticed by his parents: “Poor Papa Smurf. . . . Sometimes we used to light a can of Lysol and spray him with fire. . . . We also tore the arms off of Cobra Commander and put his head in a vise. We took Duke, from G.I. Joe, and twisted him around until his spine snapped. . . . And then we set them on fire too. Why did we do that?” [p. 288] Are these passages intended to impugn Brent’s parents on some level? Or are they meant simply to pinpoint Brent’s growing awareness of violence and its ramifications? Why do you think he includes them?

5. Brent struggles to find a means to articulate his sorrow and regret over the disaster to his family. Yet when presented with family therapy specifically tailored to facilitating this kind of dialogue, Brent becomes reticent, unyielding, and sarcastic. Why?

6. Brent writes of his burn treatments: “There are two kinds of people in this world. People that have to lie on their stomachs for ten days straight and people that don’t. And the lucky bastards that don’t have to lie on their stomachs for ten motherfucking days are the ones that get to skate through life like they have their own personal Zamboni smoothing the way for them” [p. 82]. How much responsibility does Brent accept for his injury? To what extent does he blame fate?

7. Brent’s mantra, “I hate myself,” continues well after the fire. How much of this can be attributed to the normal pains of adolescence? What are the signs that his self-loathing is abating or shifting by the time he returns to school?

8. Some of the memoir’s most excruciating dialogues occur in the context of psychological evaluation. In the presence of a family therapist, Brent has a bizarre argument with his mother over whether five or ten minutes of silence have passed [p. 136]. During a session with two psychologists, Brent accuses one of the doctors of saying “scarcastic” instead of “sarcastic” [p. 216]. Do these episodes suggest true madness, or does Brent purposefully warp his ostensible grasp on reality in order to get attention? What sort of agony do you think therapy sessions like those Brent describes can invoke for a teenage boy?

9. In Darkness Visible, his memoir of mental illness, William Styron writes, “Depression is a disorder of mood, so mysteriously painful and elusive in the way it becomes known to the self–to the mediating intellect–as to verge close to being beyond description. It thus remains nearly incomprehensible to those who have not experienced it in its extreme mode.” Does The Burn Journals succeed in rendering Runyon’s depression comprehensible to readers? Is this book an appropriate cautionary or helpful tale for depressed teenagers to read?

10. One reviewer wrote of The Burn Journals: “[Brent] isn’t spared the sight of the pain felt by his family and friends, as he would have been had he died. In accepting the burden of the anguish he caused them, he finds healing and a new depth to his relationships” [“The Burn Journals A Gripping Must-Read” by Karyn Saemann, The Capital Times, November 5, 2004]. Is this an accurate assessment? If so, what evidence is there of Brent’s healing? Which relationships are deepened and renewed?

11. When Brent’s parents ask him if he is involved in the occult, Brent is overwhelmed and hurt by their ignorance of him. “They know nothing about me. Nothing at all. . . . Why don’t they love me? Why don’t they take care of me? Why don’t they act like I’m their son? . . . I can’t believe how little they know me” [p. 192]. Does Brent ever convey this sense of betrayal to them? Does this issue of misinterpretation reach a denouement?

12. When Brent is given permission to forgo his plastic face mask when he goes back to school, why does he hesitate?

13. Which of Brent’s caregivers makes the most lasting difference in his recovery process? Why?

14. The passages that describe Brent’s burn care routine in the hospital are graphic, even grisly. What role do they play in the memoir?

15. When a nurse suggests that Brent ought to be grateful for his lapses in memory after the fire, Brent’s mental response is, “I don’t want to forget anything. I don’t care if they are terrible memories. They’re mine” [p. 86]. To what extent is Brent’s journey out of darkness a process of reclamation? What societal forces could cause an upper-middle-class white teenager to feel disenfranchised or in need of reclaiming what is rightfully his?

Brent Runyon is a regular contributor to public radio programs including This American Life. He lives on Cape Cod, Massachusetts.