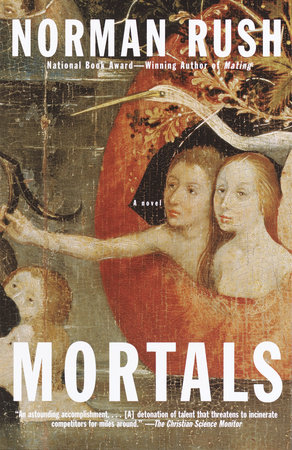 “An astounding accomplishment. . . . [A] detonation of talent that threatens to incinerate competitors for miles around.” —The Christian Science Monitor

About this guide
The introduction, discussion questions, suggested reading list, and author biography that follow are designed to enhance your group’s reading of Norman Rush’s Mortals. We hope they will provide useful ways of thinking and talking about this greatly anticipated novel by the author of Mating, which won the National Book Award in 1991.

Ray Finch is a forty-eight-year-old American who teaches literature in a boarding school in Botswana. He is ardently in love with Iris, his wife of seventeen years—yet he worries that she is slipping away from him. Iris’s dissatisfaction with life in Africa stems partly from Ray’s secret job—he is a contract agent for the CIA. The year is 1992 and Russia has collapsed, leaving the forces of communism in disarray and the CIA without a clear enemy. For Iris, who is idle and isolated in dusty Gaborone, the time seems right to return to the States. When she is affected by a lecture given by the charismatic and self-educated social activist Samuel Kerekang, who is working to redistribute wealth to the poorest of Botswana’s people, it is clear that Iris suffers guilt from her association with Ray’s secret life. Further complicating matters for Ray, Iris has recently sought help for her depression from another charismatic character, the black American physician and atheist Davis Morel, who has recently arrived in Botswana on a personal mission “to lift the yoke of Christian belief from Africa.” Ray is certain that Iris and Morel are having an affair and jealousy becomes his central obsession as he embarks on a surveillance mission into the austere and dangerous northwestern corner of the country. During the extraordinary adventure that follows, in which both Ray and Morel are imprisoned and tortured by CIA-backed thugs working to undermine an uprising led by Kerekang, Ray undergoes a harrowing—and often very comical—process of penance and self-renewal.

Mortals is both a detailed portrait of a marriage and an examination of some of the most pressing issues of contemporary life—among them love, betrayal, and forgiveness, personal and national self-deception, failed promises, false gifts, and the relation between white power and black poverty in Africa. In this brilliant, wide-ranging novel, Rush reveals the intimate link between the personal and the political aspects of his characters’ lives, showing just how inextricable they are.

1. The opening chapter, which follows Ray as he approaches his home in Gaborone and describes his feelings about his marriage, is called “Paradise.” In what ways is Ray’s marriage figured as paradise? If you have read John Milton’s Paradise Lost, how is it reflected in Mortals? Which characters in the novel could be seen as representing Satan? [See also chapter 16, “Milton, We Are Surrounded,” and pages 526-33.]

2. The episode of Rex’s attempt to record the “crimes” of the Finch family is narrated in great detail [pp. 32–39]. What does Ray’s role in this episode, and his reaction to it, suggest about the effects of his family situation upon his character? Why might Ray’s father have been so obsessed with finding the document? How does the story connect to the novel’s theme of surveillance?

4. What does Iris’s interest in Morel do to Ray’s sense of self? What is her motivation for getting involved with Morel? Does it seem that Iris is interested in leaving her marriage, or is she desperately in need of a change, of something more to occupy herself? Does it seem likely that the affair with Morel will develop into something more permanent?

5. If you have read Mating, how does Mortals take up the themes prevalent in that novel? How does the marriage in Mortals compare to the relationship of the female narrator of Mating, (whose name, we learn, is Karen) and Nelson Denoon? How does the story of what became of their matriarchal community reflect upon the viability of utopian schemes? How do the Denoons compare, as visionaries, with Samuel Kerekang?

6. The novel is written entirely in the first person narrative style, which gives the reader the illusion of complete access to Ray’s mind. What is the effect of this choice on the experience of reading and on the reader’s feelings about Ray?

7. Ray sees himself, in his work for the CIA, as “a provider of truths that others would make use of, for good or ill, the morality of what they did with them being their problem and not his” [p. 50]. Why does Ray love this work, and why is it important to him to remain in Africa “in the borderlands of the struggle” [p. 50]? Why does Ray try so hard to shield himself from moral culpability in his work and from the less successful outcomes of American interference in the affairs of foreign nations [see also p. 74]?

8. Ray realizes that “his great enemy, some great personal enemy, was missing. . . . The Russians and their creatures had been a blank system to him” [p. 50]. Is Morel the “great antagonist” he seeks? If so, why? If the second half of the novel can be seen as a prolonged contest between Ray and Morel, is there a clear winner?

9. Discuss Ray’s meditation on Iris’s unhappiness, his mother’s unhappiness, and the unhappiness of women in general [pp. 59–60]. Is Ray’s idea about the cause of women’s discontent correct? He realizes that “the only kind of societies the human race had ever been able to build were ones in which half the population was being very accommodating to the other half.” Is he right in thinking that if women stop being the accommodating half, “it was going to be a world full of divorces”?

10. Like Iris, Ray is going through a crisis of his own—as his meeting with Boyle makes clear. Ray finds that the words “Nobody knows who I am” have “a soothing effect” on him [p. 73]. In his work for the agency, he muses, “He produced art. He was a writer. . . . And his Lives existed materially and would be kept and someday might even be found, when the true history of the world was written, but that wasn’t important” [p. 75]. Why is Ray so ambivalent about his own status as a creative intellectual? How, at the end of the novel, has this situation changed?

11. Why does Rush bring Iris’s sister, and to a greater extent, Ray’s brother Rex, into the story? Why is it important that Rex is a writer and a homosexual? What is the connection between Rex’s writing and Ray’s own sense of himself as a writer and intellectual? What kind of a voice do Rex’s letters and his Strange News bring to the novel? What happens to change Ray’s feelings about his brother?

12. What is most interesting about the way Ray and Iris interact? Is there a vital connection between the games of language and sex that they play? To what extent is their marriage a model of companionship and mutual support, and to what extent is it claustrophobic? What aspects of Ray’s life, past and present, have contributed to his obsessive focus on Iris? What are Rush’s particular skills as an observer of human intimacy?

13. What does Kerekang’s eulogy for Alice Wemberg suggest about the gifts of whites to Africa? What is it about Kerekang that makes him a “person of interest” to the CIA? Is Davis Morel more radical in his intentions than Kerekang? Why is the CIA not interested in him?

14. Rush has created Kerekang and Morel as two foils to Ray—two men whom Iris admires and who are passionate believers in bringing about social change. What do they make Ray realize about himself and about what Iris wants? How does he come to feel about Morel when they are imprisoned together? How does he arrive at the decision to throw his lot in with Kerekang and Mandela’s new South Africa?

15. Why does Ray destroy his passport? What is most moving about the relationship between Ray and Keletso?

16. Ray’s imprisonment and escape contain some of the book’s most amusing moments. Why is his situation so laced with comedy? Why does he choose to be naked when he makes his stand against Quartus and his thugs? What is the significance of his having strapped Strange News to his chest?

17. Ray’s idea of a worthy goal in life is, quite simply, to love his wife: “It came to him then that probably one of the best things, or at least one of the simplest good things, you could do with your mortal life would be to pick out one absolutely first-rate deserving person and do everything you could conceive of in the world to make her happy” [p. 77]. Considering the difficulties of more socially progressive characters in the book, like the Wembergs, Kerekang, and the Denoons, does Ray’s romantic philosophy seem a surer road to contentment? How does this line of thinking underscore the desperation of Ray’s situation?

18. Messy postcolonial politics, far-flung tribal groups, an inhospitable climate, the tenuous yet privileged position of the expatriate community—many aspects of life in southern Africa are represented here. Which scenes are most effective in giving the reader a sense of the complex reality of Botswana?

19. Talking with Morel, Ray mentions that “The working vocabulary of Americans is half what it was in 1950. That’s horrifying” [p. 548]. Earlier, he thinks of Kerekang as “a victim of poetry” [p. 373]. Language and literature—particularly poetry—are essential to the identity of most of the main characters in Mortals. What is the effect of reading a book so saturated with the consciousness of words and their various implications?

20. Why might Rush have chosen “Mortals” for his title? Both here and on the cover of his previous novel Mating, Rush has chosen to use details from The Garden of Earthly Delights, by Hieronymus Bosch [see page 555]. Why this painting?

Norman Rush was raised in Oakland, California, graduated from Swarthmore College in 1956, and was a conscientious objector during the Korean War. From 1978 to 1983 he was codirector, with his wife Elsa, of the Peace Corps in Botswana. He has also been an antiquarian book dealer and a college instructor. His stories have appeared in The New Yorker, The Paris Review, and Best American Short Stories. Whites, a collection of stories, was published in 1986, and his first novel, Mating (1991), won the National Book Award. Mortals is his second novel.

A Cure for Night
Justin Peacock

The Thief and the Dogs
Naguib Mahfouz

The Beggar, The Thief and the Dogs, Autumn Quail
Naguib Mahfouz

A Prayer for the City
Buzz Bissinger