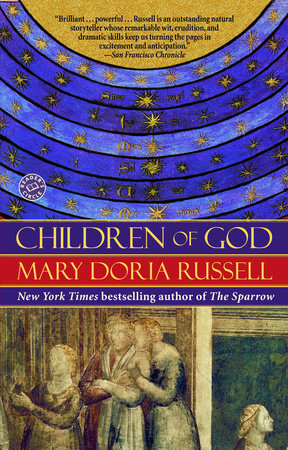 "Immensely satisfying…Children of God engages readers with Russell’s provocative themes because it is a fine novel, with a compelling plot, intriguingly complex characters and enough poetry in the writing to convey the heartbreaking tragedy that even the best-intended actions can cause."
—The Cleveland Plain Dealer

"Even more ambitious in scope than The Sparrow, the sequel addresses issues of peace, justice and belief, handling complicated spiritual and moral questions with depth and sensitivity."
—USA Today

"[Russell] SPREADS THE STORY OUT OVER TIME AND SPACE, drawing in every possible character with beautiful logic….Sequels often stumble. This one soars."
—Detroit Free Press

"A GEM…SWEEPING, OPERATIC…Russell’s gift for dialogue and the novel’s questioning of our very souls at the dawn of a new millennium give Children of God a quality that transcends genre."
—The Globe and Mail

"A sequel that will please even readers new to her interplanetary missionaries…Misunderstandings between cultures and people are at the heart of her story. It is, however, the complex figure of Father Sandoz around which a diverse interplanetary cast orbits, and it is the intelligent, emotional and very personal feud between Father Sandoz and his God that provides energy for both books."
—Publishers Weekly

"The slow return of [Sandoz’s] faith brings pain nearly as great as the sudden rending of it. Russell’s exploration of the psychic rift and its healing is eloquent, illuminating all the dark corners of the mind in great novelistic style."
—Cleveland Free Times

"A brutal and deliberate tale…that will challenge and sometimes shred the reader’s preconceptions."
—Kirkus Reviews

"This is not a book about easy faith, or God as a nice guy. This is the God of Job, and his world is a moral thicket, a vale of tears, a place of terrors and wonders almost beyond human understanding."
—Locus

1.         How have the unforeseen mistakes of the first visitors to Rakhat influenced the history of the planet? Are there any parallels from our history? What does this story say about the gap between intention and effect? What do you see as the themes of this story?

2.         Russell has constructed Children of God using a three-tiered story line: Earth and its standard time; the ship, Giordano Bruno, and its Earth-relative time; and time on Rakhat. The story also contained two parallel narratives: that of Mendes and that of Sandoz. Do you think this makes the story more interesting? Did you find it easy or difficult adjusting to the time jumps?

3.         Russell never tells us what happened to the UN party that showed up at the end of The Sparrow and sent Emilio back to Earth. What do you think happened to them? Why does Russell leave the fate of the rescue party a mystery?

4.         One reviewer describes the characters in this story as "rather too forgiving to be wholly human." Do you agree? If you were in Sandoz’s shoes, would you be able to work with the people who kidnapped you?

5.         At the end of the book Emilio Sandoz makes it very clear to Sofia that he can’t forgive what was done to him. He is ashamed of that–he wishes he could, but he just can’t let go of his hate. Do you think that will ever change for Sandoz? Sandoz also realizes that he can’t hate the children of the men who harmed him, he can’t hate the Jana’ata in general for what Supaari VaGayjur and Hlavan Kitheri and seventeen other men did to him. Is this a moral triumph for the former priest?

6.         What price does Danny Iron Horse pay for agreeing to do what feels like a wrong for the right reason? Eventually Sandoz comes to understand the pressures Danny caved in to, but he never misses an opportunity to rake him over the coals for it. What sort of pressures was Danny subjected to? And how does Sandoz make him pay for his decision?

7.         History and religious literature are both packed with examples indicated that God’s favor brings not wealth and happiness, but agony and torture. How could Sandoz, a Jesuit priest inculcated with stories of martyred saints, feel so betrayed by God? Is there a difference between what happened to Sandoz and what happened to martyred saints throughout history?

8.         Sofia has had all the same traumas as Emilio but unlike Emilio, she did not have sympathetic supporters to help her overcome what happened to her. How does she survive her experiences? How would you describe her reaction to the traumas she has suffered? Why does she become so blind to the suffering of the remaining Jana’ata?

9.         In the Coda, Emilio muses that we come into the world hardwired to hear noise and make language, to see a chaos of color and find patterns, to experience random events and make a coherent life out of them. Is it possible that the idea of God is simply a manifestation of that biological drive to impose structure on sensory input?

10.         How would you compare Children of God to the first Sandoz/Rakhat book, The Sparrow? Some reviewers consider Children of God a much darker story. Do you agree?

11.         Even when he appears to be getting on with his life, Sandoz is caught in the larger machinations of a battle between Fate and Providence. Which do you think wins out in the end? Is there a clear winner? Does this novel provide the answers to Sandoz’s questions about faith?

12.         This story forces us to face the task of accepting the less theological and more ethical possibility that God may be merely an idea, yet one that still drives a people to live like children of God who place as much faith in a universal family as they do in the divine. Do you think God is merely an idea or does God really exist?

13.         Beyond its determination to see Sandoz fulfill his destiny on Rakhat with or without his consent, why does the Church conspire to kidnap Sandoz and send him back to Rakhat? What purpose does this act serve? What would your reaction be if you were in Sandoz’s shoes? Does the result–Sandoz’s reconnection with God and his coming to terms with what happened to him on the planet–justify his kidnapping? In other words, do the ends justify the means?

14.         There were extraordinarily important children born because Emilio was on Rakhat, including Isaac, Ha’anala and Rukuei. So, whether it’s Providence or dumb luck, Emilio was the catalyst for everything that happened on Rakhat in the generations that followed the first Jesuit mission. Do you think Emilio realizes this? Does this make the suffering he lived through worthwhile?

15.         What do you think of Danny Iron Horse’s plan to save the Jana’ata by establishing reservations? Do you think Danny’s plan will work in the long run or will it be as disastrous as America’s reservation system was for Native Americans?

16.         Sandoz faces a dilemma at the end of The Sparrow. If he accepts the spiritual beauty and the religious rapture he experienced as real and true, then all the rest of it–the violence, the deaths, the maiming, the assaults, the humiliations–all that was God’s will, too. Either God is vicious–deliberately causing evil or at least allowing it to happen–or Sandoz has been deluded. What do you think of the way Russell handled this dilemma in Children of God? What is the place of evil and pain in a world ruled by a benevolent God?

Mary Doria Russell received her B.A. in Cultural Anthropology from the University of Illinois-Urbana, her M.A. in Social Anthropology from Northeastern University, and her Ph.D. in Biological Anthropology from the University of Michigan-Ann Arbor. In the process of earning her degrees, Russell studied linguistics, genetics, anatomy, archaeology and geology–all of which found their way into her critically acclaimed novels.         Prior to her award-winning debut novel The Sparrow and its equally praised sequel Children of God, Russell had written only scientific articles–on subjects ranging from bone biology to cannibalism–and technical manuals for medical equipment as complex as nuclear magnetic resonance scanners. In her own words, she admits, "I had a great time, published a lot of stuff, won a bunch of awards and grants, but eventually got fed up with academia and quit." Making the transition from scientific and technical writing to fiction wasn’t easy. Russell estimates, however, that "only about twenty-two anthropologists, world-wide, read my academic publications and nobody reads computer manuals, so I figured that if even just my friends read my novels, I’d be way ahead in terms of readership because I have a lot of friends." A recent convert to Judaism, Russell has nevertheless maintained a strong connection with the Catholic education of her childhood. Asked why such a detailed look at faith in a higher power and religion in her novels, Russell explains, "I wanted to evaluate, as an adult, issues that had lain dormant for me since adolescence, to study the religion of my youth, to revisit the source of my values and ethics. That’s why I chose to write about men who are collectively among the most admirable and best educated of Catholic priests, the Jesuits. Writing The Sparrow and Children of God allowed me to weigh the risks and the benefits of a belief in God, to examine the role of religion in the lives of many people." Mary Doria Russell lives in Cleveland, Ohio, ("and likes it very much, thank you") with her husband, Don, and their son, Daniel. She is currently working on a historical thriller about the Jewish underground in Genoa during the Nazi occupation of Italy. "There are extraordinary stories of rescue and resistance in northern Italy," says Russell, "and they deserve to be better known. We’ve spent fifty years trying to understand what went wrong in most of Europe–it’s time to look at what went right in Italy, where 80 percent of Italian Jews survived the occupation, and where thousands of European refugees found welcome and shelter and support."
Learn More About Children of God
print

On the Beach
Nevil Shute

The Years of Rice and Salt
Kim Stanley Robinson

The Gods Themselves
Isaac Asimov

A Canticle for Leibowitz
Walter Miller

The Outside
Ada Hoffmann