Dreamers of the Day Reader’s Guide 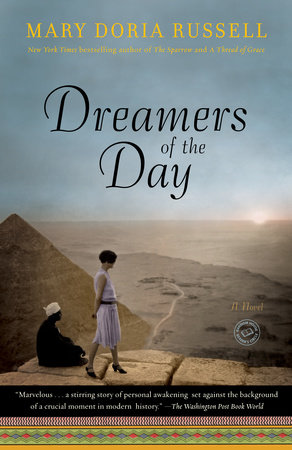 Dreamers of the Day Reader’s Guide

1. At age thirty-eight, Agnes Shanklin "believed that all the big questions of [her] life had been answered." If her family had not died during the influenza, do you think she would have gone on to the dismal future she imagined for herself? Are the opinions and expectations of others strong enough to determine a life?

2. Agnes begins to break the mold when she buys new clothes and gets her hair bobbed. Makeover shows are popular on television today, and people often say that "this has changed my life." Do you believe them? Are appearances really that powerful?

3. Clothing is mentioned a great deal in the novel. In what ways are the characters in Dreamers of the Day defined and/or influenced by their clothes? How do Agnes, Mumma, Gertrude Bell, and T. E. Lawrence use their fashion choices as indicators of their attitudes? Is your clothing a tool or a dis­guise or just something to cover your nakedness?

4. What does Rosie embody for Agnes? Is her attachment to her little dog "pathetic," as she suggests? How does Rosie’s existence color the novel and influence its chain of events?

5. Unlike Mumma and her devout sister, Lillie, Agnes struggles with her faith. Why are some people so at home in the religion they were born to, while others chafe at it? Does her trip to the Holy Land change Agnes’s philosophical framework, or is she left without a moral compass? Where is Agnes at the end of the novel? Is she a "soul who cannot find her way"?
6. Russell paints a vivid picture of America in the Roaring Twenties, and identifies a strong correlation between identity and consumption (with Freud and postwar advertising to thank). How has advertising changed since the 1920s? Do you recognize modern America in the descriptions?

8. T. E. Lawrence, Karl Weilbacher, Gertrude Bell, Lord Cox, and Winston Churchill all have theories on imperial rule and how to best resolve the growing conßicts in the Middle East. What are their ideas and how do they hold up to hindsight and a modern historical perspective?

9. Agnes alludes to Shakespeare’s observation "conscience makes cowards of us all." Who is Agnes hearing when she listens to the voices of Mildred and Mumma (and Mark Twain)? What influences her life-changing decision to travel to Egypt? What resolution, if any, does Agnes reach through their competing voices?

10. Karl believes "to be enjoyed, life must be shared." This assessment is in sharp contrast to the independent and decidedly single Agnes, Gertrude Bell, and T. E. Lawrence. Bell dismissively maintains that "happy and contented people don’t make history." Who among them do you think is truly fulfilled?

11. Do you agree with Karl’s assessment that "[foreigners] cannot tolerate to feel ignorant long enough to understand [the Middle East]"? T. E. Lawrence advises Agnes upon her arrival in Cairo: "If you think you understand Middle Eastern politics, they haven’t been explained to you properly." After reading Dreamers of the Day, what about the Cairo Conference and the Middle East, if anything, has become clearer? More confusing?

12. When Osama bin Laden took "credit" for the events of 9/11, he said that the attacks in 2001 were, in part, revenge for "the catastrophe of eighty years ago." What "catastrophe" was he referring to? Why is it remembered in the Middle East, but forgotten in the West?

13. What advice could the British aristocracy take away from their camel ride through the desert?

14. Examine the characterization of the women in Dreamers of the Day: Agnes, Mumma, Lillie, Gertrude, and Clementine. What similarities do you find? What are their striking differ­ences? Generations later, do these women seem alien to you or familiar?

15. Agnes thinks that "every event is a reenactment" and that "observing human history has turned out to be a terrible exercise in monotony." Do you agree? Will we ever achieve Agnes’s dream of Òpeace, progress, and prosperity?"

Learn More About Dreamers of the Day
print

The All-True Travels and Adventures of Lidie Newton
Jane Smiley

The Virtues of War
Steven Pressfield

Ride the Wind
Lucia St. Clair Robson
Back to Top