Lord of the Deep Teacher’s Guide 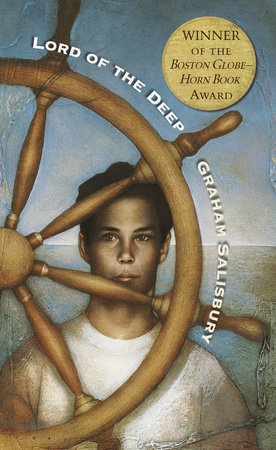 Lord of the Deep Teacher’s Guide

The relationship between a 13-year-old boy and his stepfather and the lessons they learn from one another create a memorable story set on the island of Hawaii.

Mikey Donovan is fatherless until Bill, a fisherman, marries his mother and moves them and everything they own from Maui to the big island of Hawaii. Now 13 years old, Mikey works as a deckhand on the Crystal-C, a charter boat owned and operated by Bill. Mikey feels that he belongs to the sea and looks forward to each charter so that he can be with Bill, the best skipper in Hawaii.

But when two brothers, Ernie and Cal, charter the Crystal-C, Mikey sees a side of Bill that he didn’t know was there. Mikey clearly understands right and wrong, but Bill talks about something called “in-between.” And it’s the “in-between” that Mikey must learn to live with when Bill signs a paper giving Ernie and Cal full credit for catching a record-breaking fish that he helped them catch.

Graham Salisbury’s family has been in the Hawaiian Islands since the early 1800s. He grew up on Oahu and on Hawaii, graduated from California State University, and received his M.F.A. from Vermont College of Norwich University. His books have received numerous awards, including the prestigious Scott O’Dell Award for Historical Fiction for Under the Blood-Red Sun. He is also the winner of the John Unterecker Award for Fiction and the PEN/Norma Klein Award. He lives with his family in Portland, Oregon.

Ask students to write down ten words that come to mind when they hear the word father. Then ask them to write a brief description about their idea of a “good” father. Encourage those who wish to share their writing in class. What is the difference between a father and a father figure?

FAMILY—Describe Mikey’s family. Mikey’s mother tells him that his real father was “afraid of . . . being a father.” (p. 13) Ask the class to list the qualities of a good father. How do they know that Bill is a good father to both Billy-Jay and Mikey? How does Mikey’s mother encourage the relationship between Mikey and Bill? At what point in the story does Mikey begin to see Bill as a father? Describe Ali’s relationship with her father. Explain what she means when she says, “He’s my father. I have to like him.” (p. 55)

HONESTY/DISHONESTY—Bill tells Mikey that he has learned that things aren’t just right or wrong and is fully aware that he is being dishonest when he allows Ernie and Cal’s catch to be registered as a world-record fish. Ask the class to discuss why Bill changes his mind and allows the fish to go down in the record books. Mikey tells Bill, “What they did is wrong and I can’t go along with it. I’m sorry.” (p. 178) Bill replies, “Why are you letting it bother you so much? It’s my problem, Mikey. Not yours. It shouldn’t matter to you.” (p. 178) Why does it matter so much to Mikey?

FORGIVENESS—Bill talks to Mikey about his real father. He says, “Try to forgive him, Mikey. Do that for yourself. He did the best he could.” (p. 12) Discuss how a person can forgive someone they don’t even know. Why does Bill think that it is important for Mikey to forgive his dad? Mikey is disappointed when Bill allows Ernie and Cal to lie about the way they caught the prize fish. “What he wanted was to forget it ever happened. The whole thing scared him. It wasn’t supposed to be like that with Bill.” (p. 169) Discuss whether Mikey ever truly forgives Bill for lying about the fish. Mikey really wants to talk with Bill about the incident. How does communication contribute to forgiveness?

FEAR—There are several times in the novel when Mikey experiences fear. Ask the class to discuss his most fearful moment. How does he deal with his fear when he has to go overboard and cut the line loose? Explain what he means when he says that fear was “behind and below him.” (p. 84) Discuss whether Mikey experiences fear when he jumps overboard at the end of the novel and swims to shore.

COMING OF AGE—Engage the class in a discussion about the meaning of the term coming of age. How does Mikey come of age in the novel? What is Ali’s role in Mikey’s coming of age?

SOCIAL STUDIES—Display a world map and point out the Hawaiian Islands. Divide the class into seven small groups and assign each group one of the seven inhabited Hawaiian Islands to research. Ask each group to find out the following information: population, geography, leading industry, and natural resources. Ask each group to share their findings in class. Discuss how the islands are alike and how they are different.

Ask students to research the “Professional Game-Fish Rules.” Why is it so important to follow the rules? Have them make an illustrated chart of the rules to post on charter boats like the Crystal-C. Why are fishing and game rules considered a social science?

SCIENCE—Bill studies the weather, the currents, and even uses superstition to determine the best fishing spots. Ask the class to use books in the library or sites on the Internet to find out how weather conditions affect deep-sea fishing. The class may also enjoy searching for some of the superstitions related to fishing. Ask them to prepare a short talk titled “Fact and Fiction of Deep-Sea Fishing” that they would deliver to a group of tourists onboard a fishing boat.

Mikey assists Bill on the Crystal-C with many tasks. One of his jobs is to select the appropriate lures. Ask students to refer to the Internet site www.hawaiifishinglures.com and find out about the various lures used for deep-sea fishing in Hawaii. Instruct them to make a poster, matching fish with the right lures.

ART—Ask students to research the various types of fish and sea creatures that live in the Pacific Ocean around the Hawaiian Islands. Have them create a mural collage titled “Under the Sea” that includes every type of living creature indigenous to the area. Instruct them to use accurate colors and textures.

An ALA Best Book for Young Adults

A School Library Journal Best Book of the Year

"This multilayered novel is a masterpiece of subtlety.“ —Starred, The Horn Book Magazine

eHawaiiGov
www.state.hi.us
The official site of the state of Hawaii.

Hawaii Fishing Lures
www.hawaiifishinglures.com
A description of the many different types of fishing lures used for fishing in Hawaii.

RELATED TITLES
by topic and theme


Learn More About Lord of the Deep
print

The Dear One
Jacqueline Woodson

That Was Then…
Melody Carlson

Zen and the Art of Faking It
Jordan Sonnenblick

On the Fringe
Various

Home Is East
Many Ly

What Child Is This?
Caroline B. Cooney

The Truth About Sparrows
Marian Hale

Journey to the End of the World
Henning Mankell

This Is My America
Kim Johnson

They Wish They Were Us
Jessica Goodman

This Is What I Know About Art
Kimberly Drew

Beyond the Gender Binary
Alok Vaid-Menon

Burn Our Bodies Down
Rory Power

The New Queer Conscience
Adam Eli
Back to Top