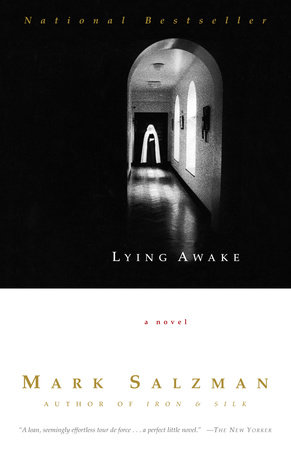 The introduction, discussion questions, suggested reading list, and author biography that follow are intended to enhance your group’s reading of Mark Salzman’s Lying Awake. We hope they will give you interesting ways to talk about this beautifully crafted novel about a middle-aged nun whose "dark night of the soul" raises profound questions about the nature of faith, identity, and artistic creation.

In a Carmelite monastery outside present-day Los Angeles, life goes on in a manner virtually unchanged for centuries. Sister John of the Cross has spent years there in the service of God. And there, she alone experiences visions of such dazzling power and insight that she is looked upon as a spiritual master. But Sister John’s visions are accompanied by powerful headaches, and when a doctor reveals that they may be dangerous, she faces a devastating choice. For if her spiritual gifts are symptoms of illness rather than grace, will a "cure" mean the end of her visions and a soul once again dry and searching?’

This is the dilemma at the heart of Mark Salzman’s spare, astonishing novel. With extraordinary dexterity, the author of the best-selling Iron & Silk and The Soloist brings to life the mysterious world of the cloister, giving us a brilliantly realized portrait of women today drawn to the rigors of an ancient religious life, and of one woman’s trial at the perilous intersection of faith and reason. Lying Awake is a novel of remarkable empathy and imagination, and Mark Salzman’s most provocative work to date.

1. How appropriate is the choice of locale of the monastery of Sisters of the Carmel of Saint Joseph in the very heart of Los Angeles rather than in a more pastoral setting?

2. The nuns follow a way of life established for centuries. In what ways, if any, are they allowed to express their individuality?

3. Salzman writes, "The real penance in cloistered life, most Sisters agreed, was not isolation; it was the impossibility of getting away from people one would not normally have chosen as friends" [p. 21]. What incidents in the book support this statement? How does Salzman "humanize" Sister John and the other nuns—for instance, Sister Bernadette, Sister Anne, and Mother Emmanuel—without undermining his portrait of lives dedicated to serving God?

4. What specific roles do these women play in creating the reality of the religious life: the novice Sister Miriam, Mother Mary Joseph, the former prioress, and Sister Teresa, Sister John’s novice mistress? What qualities does Sister John share with each of them? What do each of their lives teach her about herself?

5. The story of Sister John’s past unfolds gradually throughout the novel. Why are some of her memories [for example, pp. 42–43, pp. 61–62 and pp. 86–90] set in italic type, while other aspects of her background are integrated within the narrative? In what ways did her family situation and her attachment to her teacher, Sister Priscilla, influence her decision to become a nun? Is she drawn to the religious life for spiritual reasons alone, or do other aspects of her life play an equally important part?

6. "For seven years she watched as the cloister got smaller and the silence got bigger . . . and the farther she traveled inward without finding Him, the more aware she became of His absence" [p. 97–98]. How does Sister John’s period of spiritual aridity affect the decision she must later make about her medical condition?

7. Is Sister John’s interpretation of her mother’s visit as "an opportunity to end the relationship once and for all, and to get away with the lie" [p. 105] fair? Is her reaction to the way her mother looks and acts surprising? What does her curiosity about her half siblings tell you about her feelings about her mother’s choices and her own? Why does she pull off her wimple and veil after the visit [p. 107]?

8. After years of feeling lost, Sister John finally feels God’s presence while making preparations for the Easter service [p. 115–6]. Why are both the setting and the time of year significant? In what way are the circumstances particularly relevant to the teachings of St. Teresa of Avila?

9. Sister John wonders, "How . . . do you talk about infused contemplation with a neurologist?"[p. 47] In reacting to her account of her symptoms, as well as when he recommends surgery
[p. 68], Dr. Sheppard treats her like any other patient. Why doesn’t he respond more directly when she says of her pain, "It’s a wonderful experience, but it’s spiritual, not physical" [p. 47]? Later in the book, Sister John compares the hospital to her monastery and imagines how a doctor might characterize the cloistered life [p. 153]. Is her description an accurate reflection of how most people would regard a celibate life devoted to prayer and contemplation? How does Lying Awake inspire or reinforce ideas about a religious vocation?

10. Sister John wonders whether Dostoevsky would have been treated for his epilepsy if he had had the option. In view of his description of his rapture [p. 120], how would you answer this question? Can artistic inspiration be related to mental imbalances, either physical or psychological? For example, how did the mental instability of artists and writers such as Vincent Van Gogh, Robert Lowell, and Sylvia Plath influence their work?

11. St. Teresa, who suffered epileptic seizures, agonized over how to tell the difference between genuine spiritual experiences and false ones and feared for her own sanity. Is her warning against "seeking illness as a means of cultivating holiness" [p. 121] still relevant today? Why is Sister John’s struggle harder in some ways than the difficulties faced by St. Teresa and other Christian mystics of the past?

12. Why does the priest say, "We’re all better off having doubts about the state of our souls than presuming ourselves to be holy" [p. 125]? How does this compare to the teachings of most religion and most people’s beliefs? To what extent do our behavior and the decisions we make entail making "presumptions" about ourselves and our place in the world?

13. "I made a commitment to live by faith, not by reason,"writes Sister John [p. 119]. In making her decision about surgery, does she rely entirely on faith, or does reason play a role as well?

14. 4. How does the language and style of Lying Awake differ from most contemporary writing? In what ways do the words of the nuns’ prayers and Sister John’s own poetry enhance the narrative? What details of daily life in the monastery help to establish the themes Salzman is exploring?

Mark Salzman is the author of Iron & Silk, an account of his two years in China; the novels The Laughing Sutra and The Soloist, which was a finalist for the Los Angeles Times Book Prize for fiction; and Lost in Place, a memoir. He lives in Los Angeles with his wife, filmmaker Jessica Yu.

Joshua in a Troubled World

The Book of Lights

Of Love and Other Demons

Palace of Desire
Back to Top