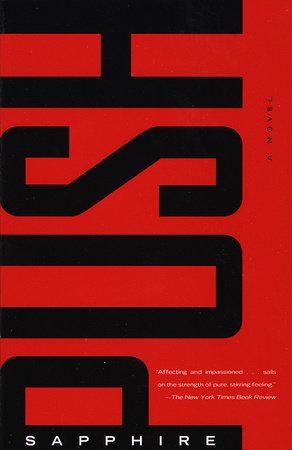 The questions, discussion topics, and author biography that follow are intended to enhance your group’s reading of Sapphire’s Push. We hope they will aid your understanding of this vibrant and powerful first novel by one of America’s most controversial poets.

“Don’t nobody want me. Don’t nobody need me. I know who I am…. Ugly black grease to be wipe away, punish, kilt, changed, finded a job for”[p. 31]. This is the voice of Precious Jones, a viciously abused Harlem girl. At sixteen, Precious is pregnant—for the second time—with her own father’s child, and regularly beaten and ordered around by her jealous, reclusive mother. Though she sits dutifully in class every day—”I always did like school, jus’ seem school never did like me”[p. 36]—she has remained completely illiterate. Her life seems set to repeat the self-destructive pattern of her mother’s, until her principal sends her to an alternative reading class where, with the help of a dedicated teacher and fellow students who have undergone experiences as harrowing as her own, she begins an intoxicating discovery of words, friendship, and, in the process, herself.

Precious’s voice—stark and crude yet filled with raw intelligence and even humor—demands to be heard and, once heard, will prove unforgettable.

1. What does this story tell us about the inadequacy of ordinary schools to deal with students’ problems and with their resulting learning handicaps? “I got A in English and never say nuffin’, do nuffin'”[p. 49], Precious says. Precious’s principal in effect tells her teacher to give up on her, saying, “Focus on the ones who can learn”[p. 37]. Is this an understandable or forgivable attitude? How would you describe Mr. Wicher and his teaching methods? Is he merely a coward or is he trying his best?

2. “The tesses paint a picture of me wif no brain,” says Precious. “The tesses paint a picture of me an’ my muver—my whole family, we more than dumb, we invisible”[p. 30]. In what way are Precious and her family members invisible to the larger world? If you have read Ralph Ellison’s Invisible Man, can you compare the way the two authors use the metaphor of invisibility for their characters?

3. During the course of the story, Precious is obliged to confront her own prejudices and modify or reject them. Her experience with the Hispanic EMS man makes her look at Hispanics for the first time as human beings like herself; her friendship with Ms. Rain and Jermaine makes her reexamine her knee-jerk homophobia. Early in the novel she says, “I hate crack addicts. They give the race a bad name”[p. 14], but later she questions that uncompromising position. In an interview, Sapphire said of Precious that “she doesn’t know that hating gay people or hating Jews or hating foreigners is detrimental to her” (Interview, June 1996). Why is it detrimental to her? Why is it imperative that she lose her prejudices before she, herself, can be helped?

6. A famous—or perhaps infamous—Labor Department study, the Moynihan Report, blamed the absence of fathers and the dominance of women (rather than economic and racial inequality) for the problems confronting the African American family. Many black scholars and activists have argued against the report’s conclusions. Which side of the argument do you believe Push to support?

7. Push presents what one reviewer called “one of the most disturbing portraits of motherhood ever published” (City Paper, November 1996). How would you explain or interpret Precious’s mother’s behavior?

8. “Miz Rain say we is a nation of raped children, that the black man in America today is the product of rape” [pp. 68–69]. What does Ms. Rain mean by this metaphor, and does it strike you as an accurate one?

9. Precious tells Ms. Rain that the welfare helps her mother, to which Ms. Rain responds, “When you get home from the hospital look and see how much welfare has helped your mother” [p. 73]. What does this novel indicate about abuses and inadequacies in the system? How might an ideal system be constructed?

10. Precious’s file reflects the government “workfare” point of view, that Precious should already be earning her own living, possibly as a home attendant. Precious objects violently to this idea. Can you understand the social worker’s point of view? Have Precious’s and Jermaine’s arguments [pp. 121–123] changed any opinions you previously held on this subject?

11. “Miz Rain say value. Values determine how we live much as money do. I say Miz Rain stupid there. All I can think she don’t know to have NOTHIN'”[p. 64]. Which opinion do you agree with, or is there something to be said for both? What answer, if any, does the novel offer?

12. “One of the myths we’ve been taught,” Sapphire has said, “is that oppression creates moral superiority. I’m here to tell you that the more oppressed a person is, the more oppressive they will be” (Bomb, Fall 1996). How does the novel illustrate the concept of the cycle of abuse? How does Precious break that cycle, and what aspects of her own character enable her to do so?

13. Push has been called a Dickensian novel, to which Sapphire has responded, “Part of what’s so wrong in this story is that we’re not in a Dickensian era. Those things shouldn’t be happening in a post-industrial society” (Bomb, Fall 1996). She sees the novel as “an indictment of American culture, which is both black and white” (ibid). What aspects of our culture have enabled the inequities described in the novel to develop? Would you say that contemporary American cities consist, as Dickens’s London was said to, of two entirely different cultures, the rich one and the poor?

14. Why do you think Sapphire has chosen to end the story where she does? Does the book end on a sad or hopeful note? What sort of future do you envision for Precious?

15. What is the significance of the novel’s title, Push? At what points in her life is Precious enjoined to “push”? What is meant by this word, and how does Precious respond to the injunctions?

Sapphire is the author of American Dreams, a collection of poetry which was cited by Publishers Weekly as, “One of the strongest debut collections of the nineties.” Push, her novel, won the Book-of-the-Month Club Stephen Crane award for First Fiction, the Black Caucus of the American Library Association’s First Novelist Award, and, in Great Britain, the Mind Book of the Year Award. Push was named by the Village Voice and Time Out New York as one of the top ten books of 1996. Push was nominated for an NAACP Image Award in the category of Outstanding Literary Work of Fiction. About her most recent book of poetry Poet’s and Writer’s Magazine wrote, “With her soul on the line in each verse, her latest collection, Black Wings & Blind Angels, retains Sapphire’s incendiary power to win hearts and singe minds.”

Sapphire’s work has appeared in The New Yorker, The New York Times Magazine, The New York Times Book Review, The Black Scholar, Spin, and Bomb. In February of 2007 Arizona State University presented PUSHing Boundaries, PUSHing Art: A Symposium on the Works of Sapphire. Sapphire’s work has been translated into eleven languages and has been adapted for stage in the United States and Europe. Precious, the film adaption of her novel, recently won the Grand Jury Prize and the Audience Awards in the U.S. dramatic competition at Sundance (2009).
Learn More About Push
print
Back to Top