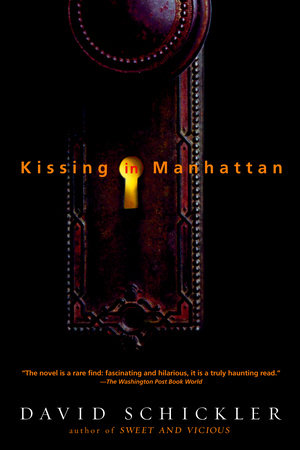 Marking the debut of daring fiction writer David Schickler, Kissing in Manhattan immediately garnered coast-to-coast applause, becoming a national bestseller while reinventing a variety of genres, from the novel and the short-story forms themselves to the very concept of a love story, a mystery, or farce.

Within the pages of this taut collection, readers meet an array of mesmerizing characters, each one linked to a mythic Manhattan apartment building called The Preemption. As the city’s gyre draws them into each other’s lives, Kissing in Manhattan peers into their private lives: a Wall Street trader with a fetish that leaves a troupe of women hungering for just the possibility of him; a misunderstood actor enraged by his role as an angry mouse; an accountant who has fallen under the spell of his elevator; a high school English teacher offered a startling proposition by the penthouse-dwelling parents of his star student; and an array of other lovers, loners, and edgy urbanites–three of whom form a perilous love triangle as the book reaches its crescendo.

Filled with startling revelations and deftly entwined destinies, each of these stories lends itself to delicious conversation. The questions and discussion topics that follow are intended to enhance your reading of David Schickler’s Kissing in Manhattan. We hope they will enrich your experience of this dazzling debut.

1. The epigraph from Tess Gallagher’s poem "One Kiss" captures the experience of many characters featured in Kissing in Manhattan. Using an online source or a collection of Gallagher’s work, read the poem in its entirety. What do you make of its surreal images regarding sexuality and fulfillment? Are David Schickler’s portrayals of love surrealistic?

2. Discuss the name of the book’s primary setting–The Preemption. Which of the building’s residents are the most memorable preemptors? Is preemption a positive or negative force in their lives? In what way are the residents affected by the legacy of Elias Rook, the building’s original owner?

3. What does Checkers gain from his confident approach to women? What would dating be like if everyone were as frank as Checkers?

4. What were your initial impressions of Flat Michael’s? What makes it so appealing to a number of the book’s characters?

5. Does "Jacob’s Bath" reveal the secret to sustaining a marriage? Is secrecy itself part of the key to love?

6. The first line of "Fourth Angry Mouse" tells us that Jeremy Jax "wanted to be funny, like his grandfather." What keeps him from being content onstage? Why would revealing his true self make him even less likely to receive the brand of laughs he craves? Did any of the book’s characters escape inappropriate laughter on your part?

7. What is the effect of pairing the prophetic jeweler with scenes of an S&M shop in "The Opals"?

8. What accounts for Rally’s attraction to Patrick? Does she seem a likely or unlikely candidate for his ritual? From where does he derive his power? Why does he become more attached to her than to the other women participating in the process?

9. How would you characterize "Duty"? Pure comedy? Horror? A love story? A tragedy? What enables David Schickler to blend these ingredients so successfully throughout the collection?

10. Douglas Kerchek cautiously avoids doing anything that might be deemed inappropriate in terms of how he behaves towards his students. Is love ruined for him (and in general) when guilt and unavailability are taken out of the equation?

11. Discuss the serendipity in Leonard Bunce’s life. Besides his birthmark, what other characteristics determine how his days and nights will progress?

12. Did James Branch’s conversations with Otis prepare him for falling in love with Rally? Was it good for him to have an invisible confidant?

13. How does Thomas Merchant’s childhood compare to Patrick’s? In what way do religious references, from visits to the Cloisters to services at St. Benedict’s, contribute to the tone of the book?

14. Why is James sympathetic toward Patrick after the shooting? What is the effect of putting the spotlight on the green balloon as the title for the final story in the book?

15. Is gender a predictor of how the characters in Kissing in Manhattan behave, or are they so unique that they transcend gender lines?

16. How would you answer the characters’ questions about the music of Morality John?

17. How might Kissing in Manhattan have unfolded if Sender the doorman were the narrator?

18. Besides the narrative thread that links them, what do these stories have in common in their depictions of sex, love, power, money, absurdity, and other themes? With which of these themes were you most able to identify?

19. What comparisons can be made between Kissing in Manhattan and David Schickler’s first novel, Sweet and Vicious? Would Grace McGlone and Henry Dante have been popular at The Preemption?

A Hand Reached Down to Guide Me
David Gates

Something I’ve Been Meaning to Tell You
Alice Munro

Mendocino and Other Stories
Ann Packer

The Cost of Living
Mavis Gallant

Among the Missing
Dan Chaon

The Afterlife and Other Stories
John Updike

The News from Spain
Joan Wickersham
Back to Top