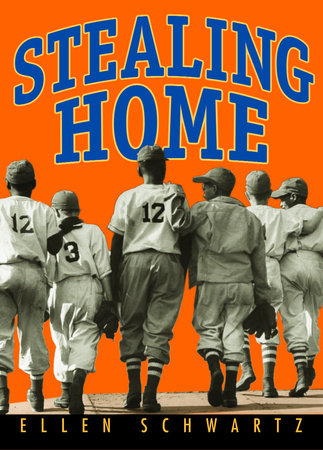 It is 1947 and Yankee fever grips the Bronx, New York. Nine-year-old Joey Sexton joins the neighborhood kids who flock to the park to team up and play. But Joey is seldom picked. He is of mixed race and his skin is lighter than the other kids’.

When Joey’s mother dies, he is sent to live with his mother’s estranged family in Brooklyn. Though it’s just across town, it might as well be another world. His grandfather, his aunt Frieda, and his ten-year-old cousin Roberta are not only white, they are Jewish. Joey knows nothing about Brooklyn or Judaism. The only thing that’s constant is the baseball fever that grips the community. Only, this time, the heroes aren’t Joey’s beloved Yankees. They are the Brooklyn Dodgers — especially Jackie Robinson.

Joey soon experiences trouble at home — where his undisciplined behavior clashes with his grandfather’s strict rules — and in the neighborhood — where the local bullies are unwilling to have “a nigger” in their midst. Yet there are triumphs, too: new friends, lively baseball games in a vacant lot, a growing sense of his heritage, and a surprising ally in his feisty cousin. Joey even finds himself rooting for Jackie Robinson — who plays for the hated Brooklyn Dodgers!

Still, one thing is missing. Will Joey be able to win over his unbending grandfather — the one person whose affection he wants most?

Ellen Schwartz is the author of ten books for children and one adult nonfiction book. Born in Washington, D.C., Ellen Schwartz now lives in Burnaby, British Columbia. She has two daughters.

In addition to writing books, Ellen Schwartz has published dozens of magazine articles and adult short stories, and her stories for children have been published in children’s magazines and teaching anthologies.

As well, she writes booklets and reports for companies and government agencies and teaches creative writing classes at Simon Fraser University and Douglas College. Before becoming a writer, she taught special education and primary grades and worked as an environmental educator.

HISTORY
Have students choose their favorite sports team and find out when it was integrated. Have them research and present short biographies of the pioneering athletes who integrated the teams.

Discuss what the students think “civil rights” means. Have them research pivotal moments in the history of civil rights around the world and present “You Are There” vignettes dramatizing the events.

SOCIAL STUDIES
Invite community members into the classroom. Have students interview them regarding instances of racism or discrimination in the community in the past and how that compares with the situation today. Have students prepare a summary of the interview.

PHYSICAL EDUCATION
Play ball! Have groups of students imagine they are baseball or softball coaches. Have them outline and demonstrate the basic skills needed for good, consistent hitting, pitching, and fielding.

Have the class brainstorm the attitudes and behaviors that create teamwork and fair play in sports. Have them draw up the “5 Keys to Fun and Safe Sports.”

1. Why was Zeyde so insistent that Joey obey the rules? Why did Zeyde think it was important to harshly discipline Joey when he misbehaved? What made Zeyde change his mind?

2. In his old neighborhood, Joey was called “whitebread” and “cracker.” In his new neighborhood, he was called “nigger” and “coon.” Why do people use racial slurs toward others? What can we do to stop this? What is an appropriate response when you hear someone call another person a hurtful name? Do you agree with the saying “Sticks and stones can break my bones, but names can never hurt me”?

5. What happened to Eli and Tommy to make them learn their lesson? What are some other ways of dealing with bullies?

6. In the 1940s, mixed-race marriages were much less common than they are today. What are some issues still faced by children and families of mixed races?

7. When Joey found the photograph of Mama in his suitcase, he both wanted to keep it and wanted to give it to Zeyde. Why did he have these torn feelings about the picture? Do you think he did the right thing with it?

8. In the past, girls did not often play sports with boys, and they were teased mercilessly if they did. Is this still the case today? What problems do athletic girls still face?

1. Have the students discuss instances of bullying or name-calling that they have experienced or known about. Have them role-play appropriate responses. They should take turns playing the bully and the victim and discuss how both roles felt.

2. Have students research the history of integration of different sports in North America and make presentations to the class. They could interview older athletes, write poems, draw murals, and create timelines, for example.

3. Have each student choose a sports hero, past or present, and research and present a biography. Try to ensure that a wide range of sports is covered.

4. Have a class discussion about the foods that are associated with different religious or cultural observances. Hold a class Multicultural Food Day, where the students share foods or recipes from their backgrounds.

5. Have the students research what life was like in their town in the late 1940s. Have them investigate the movies, music, products, fads, and foods of the time. Have them create a class mural.

6. Have the students draw or paint pictures reflecting Joey’s state of mind at the beginning of the novel and at the end.

7. Have the students bring in or recreate a favorite family photograph. Have them explain or write about why it is special to them and their family.

8. Have the students imagine that they are Jackie Robinson. Have them write a journal entry following either the black cat incident or the spiking incident.

In the Year of the Boar and Jackie Robinson
by Bette Bao Lord, illustrated by Marc Simont
ISBN 0-06-024003-2

The Kid Who Only Hit Homers
Matt Christopher

Life of Me, the #14
Lin Oliver and Henry Winkler

The Day of the Iguana #3
Henry Winkler and Lin Oliver

Niagara Falls, Or Does It? #1
Lin Oliver and Henry Winkler

Summer School! What Genius Thought That Up? #8
Lin Oliver and Henry Winkler

The Curtain Went Up, My Pants Fell Down #11
Henry Winkler and Lin Oliver

Who Ordered This Baby? Definitely Not Me! #13
Henry Winkler and Lin Oliver

What Comes Next
Rob Buyea

Child of the Wolves
Elizabeth Hall

Half and Half
Lensey Namioka

The Most Beautiful Place in the World
Ann Cameron

Barfing in the Backseat #12
Lin Oliver and Henry Winkler

A Brand-New Me! #17
Lin Oliver and Henry Winkler

Left Behind
Laurie Halse Anderson
Back to Top