All Is Vanity Reader’s Guide 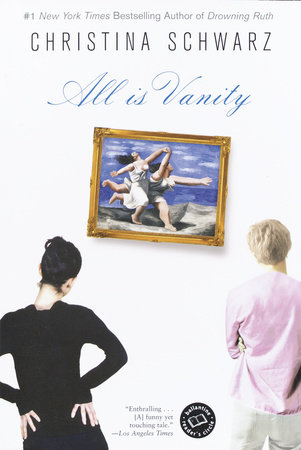 All Is Vanity Reader’s Guide

print
All Is Vanity Reader’s Guide

1. This quotation by William Dean Howells, an anti-Imperialist writer during the early 20th century and friend of Mark Twain, precedes All Is Vanity: “People are greedy and foolish, and wish to have and to shine, because having and shining are held up to them by civilization as the chief good of life.” Do you think Howells’ observation about human psychology is correct? Furthermore, what do you make of the distinction between “people” and “civilization”? Are the structures and contrivance of civilization made by people? Why do you think Schwarz chose to begin with this quote and how did it influence your reading of the novel?

2. Is Margaret a sympathetic character? How is she interesting; how is she flawed? We only hear Letty’s direct voice a few times throughout the novel — how well did you get to know her? To whom do you relate more, Margaret or Letty?

3. As a child, Margaret thinks “Margaret was admired, but Peggy, I believed, would be well-liked. The way Letty was.” (8) At the end of the novel, Margaret signs her letter to Judge Brandt “Peggy Snyder.” What do you think motivated her to do so? A desire to be well-liked or a desire to be more like Letty?

7. Schwarz deals with notions of class and class mobility throughout the novel. How would you describe the class structure that she portrays? What does it mean for one to be “classy”? Are social classes real, fixed entities or are they perspectives that one adopts?

8. Mothering is another theme in All Is Vanity. Letty is a mother of four children, and early on, Margaret, buying baby name books, describes herself as a mother because of her novel-writing efforts. What do you think are the similarities between mothers and authors? Do you believe both positions bear the same kind of social devaluation (such as people’s assumptions that it doesn’t take much effort to be a mother or to write a book)?

9. How would you define “work”? Margaret states “Though I appreciated Letty’s attempt to empathize, I did not, I admit, relish her equating her work with mine.” (56) What is the relationship between one’s work and one’s social class? If social class is structured by the kind of work one does (e.g. factory workers compared to investment bankers), then in what class do mothers and authors fit?

10. The novel is structured so that we directly participate in Margaret’s story, while we only see Letty’s life through her emails to Margaret. Do you think the Letty and Margaret have distinctive narrative voices? If so, whose did you like the most? Why do you think Schwarz structured the novel this way? How might this structure dilute or dramatize Letty’s story?

11. Describing the hilarious problems that arise while making petit fours, Letty writes “…these old-fashioned cakes project precisely the right image. They demonstrate that my children come first in that I’m devoting my time and creativity to delighting my daughter’s class with ephemeral finger food, but at the same time they prove that I’m too sophisticated to be limited to a smiley-faced cupcake kiddie world.” (35) Why do you think Letty puts so much emphasis on material goods? Do you think this is one of Letty’s idiosyncrasies or is it a common trait in a consumer culture? Do you identify with Letty’s consumerism?

12. What does it mean to be a “consumer”? While both characters are consumers, Letty desires material goods while Margaret desires intellectual status. Is there a difference between material consumerism and intellectual consumerism? Can people own ideas in the same way that they own a car?

13. What is the difference between fact and fiction? If we think of Letty’s life as fact and The Rise and Fall of Lexie Longtree Smith as fiction, wherein lies the difference? Consider the difficulty Margaret had in creating a character from scratch, as opposed to the ease with which she writes the novel modeled on Letty’s life.

14. Throughout the book, Margaret elaborates on how Letty excelled at almost all tasks: mathematics, languages, cooking and even writing (Margaret confesses that, as a teenager, her letters were modeled after Letty’s). Is Letty the woman that Margaret always thought herself to be? Was Letty really the Robin to Margaret’s Batman? How much of Margaret’s conception of her childhood self do you think is steeped in self-deception?

15. The trials and tribulations of Margaret’s novel-writing are some of the funniest parts of All Is Vanity. Do you think that Margaret’s neurosis is emblematic of all writers? Must a writer be somewhat obsessive and neurotic to succeed?

16. Who do you think is the real story-teller in All Is Vanity: Margaret or Letty? Does Margaret simply appropriate Letty’s story and claim it for herself, or does she have her own story to share?

17. In what ways are Margaret and Letty similar? In what ways are they different? Are the two women simply inversions of one another — when one fails, one succeeds; while one grows poorer, one gets richer?

18. Regarding motherhood, Letty writes to Margaret: “This is why you can do nothing other than pay attention to your children when you’re a mother, because if you’re dying to get back to something else — your own endless story, for instance — you just feel impatient, whereas otherwise you would be utterly charmed by this little creature who really hasn’t been talking for all that long wanting to tell you and tell you and tell you things he’s made up out of his clever little brain” (174). In becoming mothers, do you think women give up all claims to autonomy and creativity? How does this sacrifice compare with the metaphorical “mothering” of an author?

19. Ultimately, what do you take to be the flaw which motivates Margaret to make such poor choices? What is Letty’s flaw? Was there evidence of these flaws early in their character development?

20. Letty describes her husband as an academic who thinks that art is intrinsically valuable — that its aesthetic transcends people and the material world. Yet, in the world of High Art, materialism and consumerism seem to walk hand in hand: from gourmet lunches and dinners, to homes, to elaborate charity functions given for greater art appreciation and education. What do you think is the relationship between art and consumerism? Does art transcend consumerism, or do artists engage in self-deception akin to Margaret’s?

21. Is there a truth to be found in consumerism? Does having better things make you a better person? Is consumerism the sole mechanism for class mobility, or is there something more to socioeconomic class than one’s purchasing power?

22. In the very beginning of Margaret’s betrayal of Letty, she compares Letty’s alter-ego, Lexie, to Jay Gatsby (From F. Scott Fitzgerald’s The Great Gatsby) and muses: “Comparing Lexie to Gatsby was somewhat misleading. No matter what Gatsby did, he couldn’t change the fact that underneath he was still James Gatz, a nobody from the Midwest, and therefore unacceptable to posh Ivy Leaguers and their crowd. He got to blame fate and society for his unhappiness. But now, in a world in which any girl from Glendale could go to Yale if her SATs were impressive enough, who did Lexie, or Letty and I, have to blame when we discovered we were not who we wanted to be? Only ourselves.” (229-30). Do you think Margaret’s right? That, unlike the 1920s, people now have only themselves to blame for their social inequities?

23. What do you think is Schwarz’s ultimate message in All Is Vanity? Is there are moral to the story?

Learn More About All Is Vanity
print

The River Where Blood Is Born

The Dallas Women’s Guide to Gold-Digging with Pride

She Poured Out Her Heart

When the Moon Turns Blue

A Little Ray of Sunshine
Back to Top