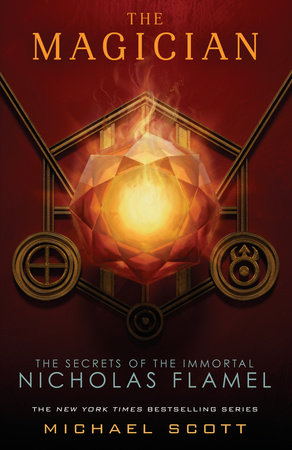 At the end of Book I, The Alchemyst, 15-year-old twins Sophie and Josh Newman are transported by a magical leygate from San Francisco to Paris along with the 14th century alchemist Nicholas Flamel and the immortal warrior maiden Scathach. Sophie’s magical powers have been awakened, and the siblings are heralded as the twins of legend with silver and gold auras. They are in the midst of a centuries-old battle involving legendary beings, magicians who are hundreds of years old, and the Codex, the Book of Abraham the Mage that holds the secrets of life and death. Dr. John Dee, a magician/astrologer from the court of Queen Elizabeth I, has imprisoned Flamel’s wife Perenelle on Alcatraz Island. Dee calls on Niccolo Machiavelli, another historical figure who has achieved immortality, to aid him in capturing Flamel and the twins. When the Comte de Saint-Germain and his wife, Joan of Arc, join the battle on the side of Flamel, sparks truly begin to fly. At the heart of this struggle is Josh’s jealousy of his sister’s powers and his impatience to have his own “awakening,” a happening that will have far-reaching consequences.

Michael Scott is one of Ireland’s most successful authors. He writes for both adults and young adults. A master of fantasy, science fiction, horror, mythology, and folklore, he was hailed by the Irish Times as “the King of Fantasy in these isles.” He lives and writes in Dublin, Ireland. Learn more about Michael Scott at www.dillonscott.com

Why is Josh suspicious of Flamel and Scathach? Why does Sophie trust them more than her twin does?

How does Machiavelli’s character in this story compare to your research into the historical person of Niccolo Machiavelli?

Why does Machiavelli feel compelled to aid John Dee when he asks for help? How do these two feel about each other, and how does that affect the plot?

Why does Machiavelli say to Flamel, “The world moved on, Nicholas. You did not.” Compare the characters of Machiavelli, Dee, and Flamel.

Why do you think Dee leaves the Sphinx to guard Perenelle? How does Perenelle manage to elude the Sphinx, and why does this tell you about her personality and her powers?

What is Saint-Germain’s connection to music? Compare the character of Saint-Germain in this story to what you can learn about a historical person of that name. Why do Sophie’s memories, gathered from the Witch of Endor, show a strong aversion to Saint-Germain?

How is Juan de Ayala helpful to Perenelle in her plan to escape? Compare what you learn of de Ayala in this story to information you research about the historical person of de Ayala.

Discuss the character of Scathach. What part does she play in the story? What is her relationship to Flamel? To the twins? To Joan of Arc and Saint-Germain? Why does she tell Sophie about her family history and how does that affect Sophie’s feeling toward her?

Why does Dee call ordinary people “humani” — how does the use of that word affect his attitude toward people? How does it differ from Flamel’s attitude and his mission? How does this difference relate to what you have learned about the historical records of Nicholas Flamel and Dr. John Dee?

What is the meaning of the prophecy about “The Two that are One, the One that is All”? What powers do you think Josh and Sophie will have now that both are awakened? Why does Flamel wonder — at Notre Dame — whether it was a good idea to “awaken” them?

The ending of the book leads to another beginning, as Flamel and the twins head to London. What do you think will happen to the twins in a future story?

PRE-READING ACTIVITIES
Have students search online and in encyclopedias for information about Nicholas Flamel, Perenelle Flamel, Dr. John Dee, Niccolo Machiavelli, the Comte de Saint-Germain, Joan of Arc, and Juan de Ayala. Have them make a chart of facts that they can find out about these people as well as the legends that have evolved around their names. Discuss world events that took place during the century each of them lived.

Have students research the places that appear in this volume: Alcatraz, Sacré-Coeur Basilica, Notre Dame Cathedral, the Eiffel Tower, and the Catacombs of Paris. Why would the author choose each of these places to be settings in the story?

POST-READING ACTIVITIES
The author tells us: “Long ago, Nicholas and Perenelle had come to realize that at the heart of every myth and legend was a grain of truth . . .” Have students make a list of legends in this book that the author has used to expand that “grain of truth.”

Have the class look up these words and define the unique characteristics of each of these creatures and objects: tulpa, golem, nidhogg, disir (Valkyrie), sphinx, gargoyle, grotesque, nunchaku, Excalibur, Clarent.

Many ancient and legendary beings are mentioned in this book; some are major characters, some minor characters, and some mentioned only briefly. Give students time to find out the origin of beliefs about each of these and what cultures they represent: Scathach, Dagon, The Morrigan, Areop-Enap, Mars, Deimos and Phobos, Huitzilupochtli, Black Annis, Gilgamesh

Starred Review, Kirkus Reviews, May 15, 2008:
“Readers will be swept up by a plot that moves smartly along, leaving a wide trail of destruction and well-timed revelations.”


Learn More About The Magician
pdf

Tess of the Road
Rachel Hartman

Smoke in the Sun
Renée Ahdieh

Hero at the Fall
Alwyn Hamilton

The Fork, the Witch, and the Worm
Christopher Paolini

The Kingdom of Back
Marie Lu

Tempests and Slaughter (The Numair Chronicles, Book One)
Tamora Pierce

Now I Rise
Kiersten White
Back to Top