The Nose from Jupiter Teacher’s Guide 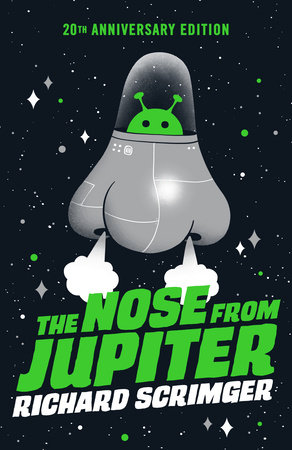 The Nose from Jupiter Teacher’s Guide

Alan Dingwall is not big or strong. He hates playing soccer and can barely keep up in math class. Moreover, he has problems at home (where his parents are divorcing), on the playground (where a gang of bullies is terrorizing him), and with his love life (there’s this girl, see…). But all that is about to change. Enter Norbert, a
tiny squeaky-voiced alien from Jupiter who has come to planet Earth on an exploration mission. Norbert takes up residence in Alan’s nose. (There’s a whole apartment in there–apparently your nose is much bigger inside than it is outside.) Norbert is fearless and a bit of a smart alec. Soon Alan isn’t acting like himself. Norbert’s pushy manner and hilarious wisecracks land Alan in trouble, and force him to address his problems. Is the alien real, or is Norbert an expression of that small part of each of us that is not afraid? Good question. As
Norbert says when he first sets foot in the nose-apartment: You don’t know what you have inside you, Al. Thanks to Norbert, Alan learns to stand up for himself, even when the odds are stacked against him.

Richard Scrimger does not live in a nose, but he does know a lot about writing. His works extend from early readers such as Bun Bun’s Birthday to other books featuring Alan and Norbert like A Nose For Adventure. Scrimger’s own adventures in parenting led to his writing a collection of articles compiled in Still Life With
Children. His works have also been nominated for The City of Toronto Book Awards plus Silver Birch and Red Maple Awards and The Nose From Jupiter won the tenth Mr. Christie Book Award. His columns have been featured in The Globe & Mail, Chatelaine and Today’s Parent magazines. Mr. Scrimger’s home in Cobourg may be a long way from Jupiter but his imagination is as bright as the many stars in Norbert’s galaxy.

ETHICS/CHARACTER DEVELOPMEN T
Although The Nose From Jupiter contains humorous elements, the lead character, Alan Dingwall, has some serious issues. He has to face difficult incidents of bullying. What strategies help Alan overcome his status as a victim? Does any character have an epiphany or change of mindset due to unfolding events?
What did that character learn about him or herself? Have you ever faced a similar struggle? Have you ever helped someone who was being unfairly targeted by bullies? What are the steps you took to assist them?
There are many family structures in the modern society. Throughout the book, Alan is coming to terms with his parents’ separation and his new life, primarily with his mother. How does he reach out to his father to maintain their relationship? What challenges does he face? Does he believe that his parents listen to him?
Alan hears a voice inside his nose. Have you ever heard a voice inside your head encouraging you to make certain choices? Give an example of when you have followed your inner voice or conscience to a positive outcome.

MATH/SOCIAL STUDIES
Norbert, an alien from Jupiter, is temporarily residing in Alan’s nose. Norbert’s new “home” features various rooms and storage facilities. Draw a scale drawing of Norbert’s dwelling inside Alan’s nose and include labels of notable features (i.e. garage). Using a Venn diagram on a separate page, compare your home to Norbert’s residence. What features are the same or different?

SCIENCE
How is Norbert’s Jupiter, as an environment, comparable to living on Earth? Is the fictionalized Jupiter that Norbert describes to Alan similar to the real climate and environment on Jupiter? How does Norbert’s space ship compare to space vehicles of today? What might be needed in a space vehicle to allow an astronaut to travel to Jupiter from Earth? How far have astronauts travelled? What specific aspect of a space vehicle has been designed by Canadian engineers?

HEALTH
How is a nose actually structured? Make a small “open-faced” model of a nose labelling key features. Why is the sense of smell such a powerful one? How does a nose function?

DRAMA
Be first on the scene to interview Norbert following his exit from Alan’s nose. What questions would you ask? How might he respond? With a partner, create a short scene to dramatize this.

MEDIA LITERACY
On the author’s website, http://www.scrimger.ca, how are Richard Scrimger’s choice of text features on the introduction appropriate? Explain your answer. Why do you think that Richard Scrimger has chosen to include a blog? How is blogging different than writing a fictional story?

1. Ask students to look at the cover of The Nose From Jupiter before they read the book and predict what elements the book might contain. Does it look like a humorous book? Why might the boy be smiling? What role do you predict the dog might play in the story?

2. Ask students to explain how the opening setting sets up an unorthodox introduction to the lead character, Alan Dingwall. Have them create a drawing of his hospital room, incorporating as many of the specific features described in the opening nine pages as they can. Have them compare their drawings with a peer buddy to see how many elements have been identified.

3. From reading the story, what can students infer about Alan’s relationship with his parents, his friends Victor and Miranda, and finally, with his adversaries like The Cougars? Ask them to support their answers with specific details from the text.

4. Ask student to imagine being either Alan or Norbert. Would Norbert enjoy being in Alan’s nose? Would Alan enjoy having Norbert nipping around his nasal cavity? Would you like to live in Alan’s nose? Would you like to have an alien fly into your nose? Ask them to cite specific details from the story to support their answers and explain why or why not.

5. Ask students if they feel that any character changed during the course of the story. How might the story seem different if it was written from another character’s point of view–i.e. Norbert, Prudence, Prudence’s collie dog? Have them write a one-page account relating to events from The Nose From Jupiter as seen through another character’s eyes.

6. Ask students to write a news report about an exciting part of the story (i.e. the soccer game, the “splash” by the river, the school washroom scene). Discuss including key components–Who, What happened, Where, When, and Why it is an important news story to tell. Have them experiment with various forms of news reports: a newspaper story, a one-minute radio piece, or even a short videotaped news spot.

7. Ask students to imagine they are the first on the scene to interview Norbert following his exit from Alan’s nose. What questions would they ask? How might he respond? Have them chose a partner and create a short scene to dramatize this.

8. Have students write a journal entry of one of the characters from the story, focusing on one specific day in the story. What thoughts or feelings might be included?

OTHER BOOKS BY Richard Scrimger

Learn More About The Nose from Jupiter
print
Back to Top