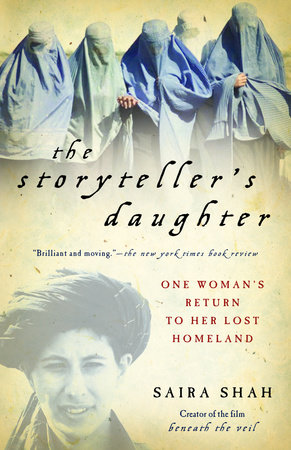 The introduction, discussion questions, suggested reading list, and author biography that follow are intended to enhance your group’s discussion of The Storyteller’s Daughter, an intense and moving look at war-torn Afghanistan through the eyes of a young woman in search of her heritage.

As a child growing up in England, Saira Shah was enchanted by the Afghanistan vividly conjured up by her father, the scion of an aristocratic Afghan family and a masterful storyteller. Years later, she discovered another Afghanistan as a journalist and filmmaker covering the bloody years of Soviet occupation and the oppressive Taliban regime. The Storyteller’s Daughter is the story of her attempt to reconcile myth and reality, to honor the traditional values and pride instilled by her father in the face of the political turmoil and religious extremism that wrought untold destruction on the magical land of her memories and dreams.

Blending personal memoir, travelogue, and front-line war reporting, Shah draws an eye-opening portrait of a land subject throughout history to countless invading armies–from the fierce warriors of Alexander the Great to the tanks and Kalashnikovs of the Soviets–and of a people who nurtured the qualities essential for survival: “generosity of spirit, courage, boundless self-confidence, and, above all, a sense of humour” [p. 18]. These qualities, embodied in the family history, oft-told legends, and classical poetry Shah relishes, have shaped her own life and her skills as a storyteller. From candid, often humorous portraits of her family in exile in Pakistan to gripping accounts of crossing treacherous landscapes with fearless mujahidin, to blood-chilling descriptions of the dangers she faced in Taliban-run Afghanistan while filming the acclaimed documentary, Beneath the Veil, Shah captures the complexities of her ancestral homeland and her own cultural identity.

1. What does the title, The Storyteller’s Daughter, reveal about the perspective Shah brings to her memoir? How does it encompass the various themes she explores?

2. Shah spends her childhood in two disparate cultures, living in middle-class Kent while identifying herself as an Afghan. As a teenager, she asks, “How could my father expect us to be truly Afghan when we had grown up outside an Afghan community?” [p.6] Does the question reflect a feeling common to immigrant families, or is her household an unusual one? What are the positive aspects of maintaining ethnic traditions in a new homeland? In what ways can it have a negative impact?

3. Shah’s father tells her, “In our tradition, stories can help you recognize the shape of an experience, to make sense of and deal with it” [p. 7]. How does this definition of storytelling, in addition to the actual stories she hears as a child, contribute to her sense that “Two people live inside me. . . . My Western side is a sensitive, liberal, middle-class pacifist. My Afghan side I can only describe as a rapacious robber baron.” [p. 14]?

4. Shah discusses the historical differences between the Islamic tradition in which she was raised and the teachings of the orthodox Muslim world [p. 10]. Why is it important to understand this distinction? What light does it shed on the repressive measures imposed by the Taliban and on the fundamentalist Islamic movement in other parts of the world? Does the distinction between a literal and a spiritual emphasis exist in other religions as well? If so, how has it manifested itself?

5. What do Shah’s descriptions of the little boy in the Afghan refugee camp [p. 28—29], Maryam, her guide in Kabul [p. 31], Halima and her family [p. 36], and others she meets during the filming of Beneath the Veil reveal about the importance of myth and legend in Afghan culture? What makes these portraits so effective in conveying the complex role these elements play in people’s lives?

6. In what ways does Shah’s visit with her extended family in Peshawar at age seventeen change her sense of self and her attitudes about Afghan culture? How does her uncle’s household differ from the one she grew up in? Do the women in this traditional Muslim family, for example, wield more power than her mother? Do the interactions within the family contradict or reinforce your previous beliefs about Muslim society?

7. Why does Shah find the idea of an arranged marriage “seductive” [p. 51]? Does it reflect her naïve eagerness to identify with her heritage? To what extent is the desire to marry “a family, a tribe, a way of life; somewhere to belong to” a universal one?

8. Shah first enters Afghanistan with the mujahidin in 1986 at the height of the war with the Soviets. Why does she take us into the home of one of their leaders, Zahir Shah? What is the purpose of depicting him as a husband, father, and son?

9. Why does Shah include the anecdotes of her conversations with Zahir Shah’s wife [pp. 76—77] and with Karima, the young woman she meets in a small village in the Valley of Song? What other examples are there in the book of why it is “practically impossible to convey concepts outside somebody’s cultural experience” [p. 94]. How, for instance, are Shah’s interactions with the mujahidin, her relationship with her extended family, and her position within the circle of Western journalists also attributable to a cultural gap?

10. At the time of the Soviet occupation of Afghanistan, Shah writes, “One could read very little in the Western press about the mujahidin that was not tinged with politics of one shade or another” [p. 87]. Are war reporters always vulnerable to preconceived notions and political prejudices? What is your reaction to Shah’s analyses of the U.S. activities during the conflict [for example, pp. 111, 119, 133, and 149]? Do they influence your opinions about the recent investigation into U.S. efforts to combat terrorism before 9/11?

11. What new insights does Shah’s perspective provide into the rise of the Taliban following the Soviet withdrawal? Are the “trade-offs” and concessions by the West that permitted the establishment of the Taliban regime [p. 204] understandable or dangerously misplaced?

12. Shah re-creates the horrors of life under the Taliban in vivid detail. What particular passages show how the distortion of Islam devolved into the blatantly cruel repression of women? In what other ways did the Taliban regime betray Islamic principles and traditions?

13. How do the descriptions of the landscape [for example, pp. 43, 82—83, 95] mirror the portrait of the Afghan population in The Storyteller’s Daughter? Do they help you better understand the national characteristics that Shah admires?

14. Shah writes, “My father’s mythological homeland was a realm where I could live through the eyes of a storyteller. In my desire to experience the fairytale for myself, I had overlooked the staggeringly obvious: the storyteller was a man” [p. 57]. To what extent are the observations and opinions in The Storyteller’s Daughter colored by Shah’s viewpoint as a woman? What does she bring to light that a man might have overlooked? Does her gender affect the tone of the book? How does The Storyteller’s Daughter compare to other accounts of war and its impact on soldiers and civilians, either fiction or nonfiction, that you have read?

15. A generation of children in Afghanistan has grown up knowing nothing but war, and the conflict still rages today. Does The Storyteller’s Daughter provide possible approaches to ending the despair and devastation ravishing the country?

16. In an interview,* Shah said “A lot of the book deals with the question of how to approach the truth.” Why has she chosen to interweave such diverse elements as mythology, genealogy, and poetry in her chronicle? How do they help deepen and clarify the factual history and reportage she presents?

* Read the complete interview at www.anchorbooks.com

Saira Shah was born in Britain to an Afghan father and Indian mother. Her father, Idries Shah, was a well-known philosopher and writer of Sufi fables and her Scottish grandmother, Morag Murray Abdullah, wrote two lightly fictionalized memoirs about her marriage to the son of an Afghan chieftain. Shah first visited Afghanistan at the age of twenty-one and worked there for three years as a freelance journalist, covering the guerrilla war against the Soviet occupiers. Later, working for Britain’s Channel Four News, she reported from some of the world’s most troubled areas, including Algeria, Kosovo, and Kinshasa, as well as Baghdad and other parts of the Middle East. Her courageous 2001 documentary about life under the Taliban, Beneath the Veil, was broadcast on CNN. Saira Shah lives in London.

Peace Be Upon You
Zachary Karabell

A Gift from Darkness
Patience Ibrahim and Andrea Claudia Hoffmann

A History of the Jews in the Modern World
Howard M. Sachar

On the Outside Looking Indian
Rupinder Gill

The Tongue’s Blood Does Not Run Dry
Assia Djebar

The Means of Reproduction
Michelle Goldberg

So Vast the Prison
Assia Djebar

The Ministry of Guidance Invites You to Not Stay
Hooman Majd

Now They Call Me Infidel
Nonie Darwish
Back to Top