The Man Who Ate the 747 Reader’s Guide 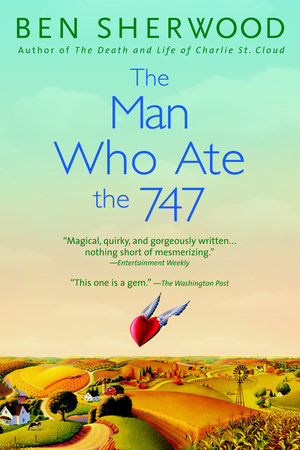 The Man Who Ate the 747 Reader’s Guide

print
The Man Who Ate the 747 Reader’s Guide

How far would you go for love? For Wally Chubb of Superior, Nebraska, the answer is breathtaking, and possibly fatal. Morsel by metallic morsel, he’s eating one of the world’s largest airplanes, hoping to win the attention of local newspaper editor Willa Wyatt. Standing by to verify Wally’s feat is J. J. Smith, a veteran staffer for The Book of Records, who has traveled the globe observing the extraordinary achievements of others while leading the most ordinary life himself—so ordinary in fact, that J.J. has never found true love. J.J.’s work has taken him to the most romantic spots on earth, from the Taj Mahal to the Eiffel Tower, yet it’s America’s heartland that holds the unexpected key to his dreams. The trouble is, his dream turns out to be Willa Wyatt, an independent woman who refuses to be wooed; she isn’t even impressed by a man willing to consume a airplane to prove his love. But this small town holds big surprises; all of its citizens make a delicious discovery about the wonder of love.

The questions, discussion topics, and author biography that follow are intended to enhance your reading of Ben Sherwood’s The Man Who Ate the 747. We hope they will enrich your experience of this unforgettable love story.

1. The novel’s first chapter features a couple trying to break the world record for the longest kiss. What does this episode tell us about J.J.’s perspective on love? What is the significance of all the world records in the novel?

2. What drives so many people to go to such lengths to appear in J.J.’s Book of Records? What keeps J.J. from possessing their ambition, determination, and optimism?

3. Why does Wally go on eating the plane even when it fails to impress Willa? Does he actually crave the grindings, or is this something he simply endures in the name of love?

4. In her newspaper editorial, Willa asks readers to admire Superior for its everyday accomplishments, not for the fact that one resident is eating a 747. Do you consider Superior to be an apt name and setting?

5. Ben Sherwood writes that the plane gives Wally wings. In what way is this true? How does Wally inspire other characters to take flight? What are the different notions of greatness in the novel?

6. What causes Wally’s health scares? What does he teach us about devotion and sacrifice? Why was he unable to recognize Rose’s love at first?

7. Sherwood worked as a television news producer for many years. Do you detect any journalistic influences in his writing, or do you feel the book’s magical realism reflects the opposite of a reporter’s perspective?

8. Discuss Willa’s little brother, who anonymously brings Wally to J.J.’s attention and has his own dreams of setting a record. In what way is he the opposite of his sister? In what way is he a reflection of her?

9. J.J. has a startling ability to recall hundreds of statistics and reduce emotional responses to a litany of neurochemistry. Does his penchant for data mirror our society in any way? Why is J.J. best able to rescue his heart in such a rural locale?

10. What’s the craziest thing you’ve ever done for love or that’s been done for you? What world record would you want to break to prove your devotion?

11. Wally appears to have a special bond with the airplane that has been rejected and abandoned just as he has. What else does the 747 symbolize?

12. What are the competing definitions of love in this novel? What defines a great couple? Is J.J. a better match for Willa than Wally?

13. What inspires the residents of Superior to finish off the 747? Have any similar incidents occurred in your community?

14. In the end, J.J. asks for new submissions to The Book of Wonders. What story from your own life would you submit?

15. What does this novel ultimately say about love and extraordinary behavior? Who are the book’s real heroes?

A national bestseller published in thirteen languages, The Man Who Ate the 747 was Ben Sherwood’s debut novel and is being adapted both as a major motion picture and a musical. Sherwood’s newest novel, The Death and Life of Charlie St. Cloud, was published in March of 2004 and is also being adapted as a feature film. An award-winning journalist, Sherwood has worked for NBC and ABC News, and his writing has appeared in The New York Times, The Washington Post, and Los Angeles Times. Educated at Harvard and Oxford, he is currently at work on a third book of fiction. He and his wife divide their time between New York and Los Angeles. Visit his website at www.bensherwood.com.

“Sherwood is a modern-day Mark Twain who writes of small-town America with love, affection, and with a definite twinkle in his eye.”
—Fannie Flagg, author of Standing in the Rainbow

“A moving love story with laughs.”
—US Weekly

“Brilliantly written, a true love story with fabulous characters. A joy to read. A book you are not going to want to miss.”
—New York Post

Learn More About The Man Who Ate the 747
print

The Flaw of Love
Lauren Grodstein

Home to You
Robin Kaye

Nothing But You
New Yorker Magazine

The Devil and the Deep Blue Sea
Karen Leabo

The Beauty of Surrender
Eden Bradley
Back to Top