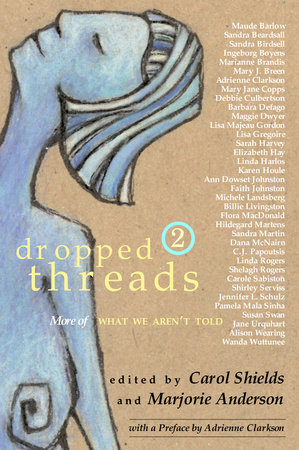 1) Is there a balance between joy and sadness in Dropped Threads 2?

2) The following is a quotation from Carol Shields’ novel Unless: "Unless you’re lucky, unless you’re healthy, fertile, unless you’re loved and fed, unless you’re offered what others are offered, you go down in the darkness, down to despair." Do the stories in Dropped Threads 2 confirm or contradict this statement?

3) Can you compare and contrast two stories from the collection on similar themes?

5) Dropped Threads 2 endeavours to look beyond the experiences of middle-class women to a broad cross-section of women with fewer privileges or less freedom in other cultures. What do you think this adds to the collection?

6) Ann Dowsett Johnston in "The Boy Can’t Sleep" says she would like to pass on advice to her son about "the mating dance of men and women." What would you tell him?

7) How does this volume compare with the first book? While it is on the same theme, there are some differences. What stands out for you, the reader?

8) What does Adrienne Clarkson’s Foreword add to the book? What is her main message to women readers?

9) Do the four divisions help "organize" the book for readers? Can you see how the stories fit under the individual banners of End Notes, Variations, Glimpses, and Nourishment?

10) What are some aspects of the surprises and silences in women’s lives that haven’t been touched on in either volume of Dropped Threads? What topic would you suggest in reply to the question, "What do women generally not talk about or pass on to others"?

How I Came Into My Inheritance
Dorothy Gallagher

I Know You’re Out There
Michael Beaumier

More Grandmothers Are Like Snowflakes…No Two Are Alike
Janet Lanese

Life In A Day
Doris Grumbach

The Sea at Truro
Nancy Willard

The Time of My Life
Rob Spillman

The Science of Single
Rachel Machacek

On the Edge
Kenneth Koch

Not Quite Paradise
Adele Barker

Why Different?
Luce Irigaray
Back to Top