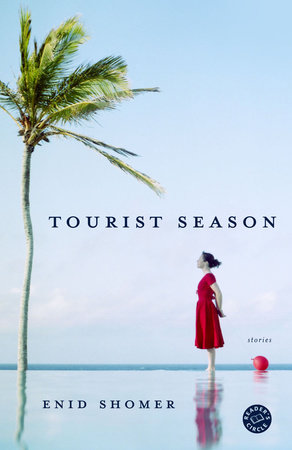 1. A strong sense of place has traditionally been important in Southern ﬁction. What role does the state of Florida play in this collection? Can you imagine these stories taking place in another part of the country?

2. What makes these stories especially modern in your view? Why couldn’t Tourist Season have been written ﬁfty years ago?

3. Shomer’s stories have been described as both poignant and humorous. How would you characterize the humor and how is it connected to the serious drama?

4. In “Chosen,” Iris Hornstein travels to Tibet to don the mantle of a reincarnated Buddhist saint. Can you imagine this happening to anyone you know? What does this story suggest about religion?

5. In “The Other Mother,” Sheila learns the true story behind Royal’s adoption when Royal is nearly an adult. How do you think Sheila would have reacted if she had learned the truth when Royal was much younger?

6. What impels Garland McKenney, the protagonist of both “Fill In the Blank” and “Sweethearts,” to commit her crimes? What do you think might prevent her in the future?

7. In the story “Tourist Season,” what do you think Frieda means when she tells Milt, “We’re both like Knoblock”? How would you characterize Frieda and Milt’s marriage? How does Frieda’s work as a Women’s Airforce Service Pilot affect her life and their relationship?

8. In “Rapture” we learn that Janet “hardly ever referred to herself as an artist or to her work as art,” yet her show tours the South and is featured in an important art magazine. How do you explain this discrepancy? Do you think it is related to her fate?

9. “The Hottest Spot on Earth” alternates between two points of view, which is rare in a short story. Why do you think the author chose this technique rather than tell the story from a single viewpoint? What pulls Jill and Patricia together and what pushes them apart?

10. A key aspect of “Sweethearts” is Garland’s relationship to Carlene, the housekeeper. What role does race play in this story?

11. How would you describe Abby Presner’s behavior toward the unnamed young man in “Crash Course”? Why do you think she doesn’t get frightened until after the incident?

12. In “The Summer of Questions,” Riva unravels secrets she hadn’t even suspected existed. What mysteries does she solve and which remain? At the end of the story Alma says, “When you’re not being beautiful, make trouble.” What would Riva’s likely response to this be?

13. Do you believe that Helen in “Laws of Nature” is actually becoming younger, or did you read this story as a metaphor or fable? What do you think the author intended? Which other stories address the aging process?

14. What role do marriage and work play in these stories? In which stories are the two at war with each other, and in which do they coexist more happily? If you are married, what is the relationship between marriage and work in your own life?

15. The women in Tourist Season range from seventeen to over seventy. What differences do you see between the younger and the older protagonists? What do they have in common? Why do you think the author chose to include women of such a wide age range in the same collection?

16. If you could be any of the women in these stories, which would you choose? Which character did you most closely identify with?

17. Iris in “Chosen,” Sheila in “The Other Mother,” Garland in “Sweethearts,” and Helen in “Laws of Nature” all leave their old lives behind and ﬁnd new ones. Do the catalysts for change come from within the women, or does environment or circumstance effect the need for change? What do you think might cause you to change your own life so drastically?

18. In what ways are the characters in these stories all tourists in their own lives?

Learn More About Tourist Season
print
Back to Top