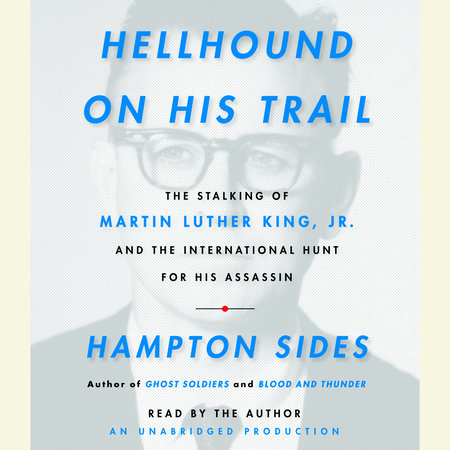 The questions, discussion topics, and reading list that follow are intended to enhance your reading group’s discussion of Hellhound On His Trail.

From the acclaimed bestselling author of Ghost Soldiers and Blood and Thunder, a taut, intense narrative about the assassination of Martin Luther King, Jr., and the largest manhunt in American history.

On April 23, 1967, Prisoner #416J, an inmate at the notorious Missouri State Penitentiary, escaped in a breadbox. Fashioning himself Eric Galt, this nondescript thief and con man—whose real name was James Earl Ray—drifted through the South, into Mexico, and then Los Angeles, where he was galvanized by George Wallace’s racist presidential campaign.

On February 1, 1968, two Memphis garbage men were crushed to death in their hydraulic truck, provoking the exclusively African American workforce to go on strike. Hoping to resuscitate his faltering crusade, King joined the sanitation workers’ cause, but their march down Beale Street, the historic avenue of the blues, turned violent. Humiliated, King fatefully vowed to return to Memphis in April.

With relentless storytelling drive, Sides follows Galt and King as they crisscross the country, one stalking the other, until the crushing moment at the Lorraine Motel when the drifter catches up with his prey. Against the backdrop of the resulting nationwide riots and the pathos of King’s funeral, Sides gives us a riveting cross-cut narrative of the assassin’s flight and the sixty-five-day search that led investigators to Canada, Portugal, and England—a massive manhunt ironically led by Hoover’s FBI.

Magnificent in scope, drawing on a wealth of previously unpublished material, this nonfiction thriller illuminates one of the darkest hours in American life—an example of how history is so often a matter of the petty bringing down the great.

1. In Hellhound on His Trail, Hampton Sides examines a notorious moment in American history— the assassination of Martin Luther King, Jr., by James Earl Ray—and provides many never-before-revealed details about Ray, King, and the fateful events leading up to April 4, 1968. To fully appreciate the context of this tragic event in our nation’s past, your discussion group might consider reading about the civil rights era in the 1960s and the larger issues that surrounded King’s death. Here are some resources that offer interesting and useful information.

2. Which characters came alive for you in Hellhound on His Trail? Did you learn anything new about some of the figures involved in this period of American history, or have you come to think about certain individuals in a different way based on what you’ve read about them?

3. In his “Note to Readers,” Hampton Sides writes, “All writers sooner or later go back to the place where they came from.” Having been a child living in Memphis when Martin Luther King was shot, do you think Sides separated himself from the events he reported on in this book? Consider this question in context to the Oklahoma City bombing in 1995 or the tragic attacks of 9/11: Is it possible to be a journalistic observer of an occurrence like this when it happens in your hometown?

4. Every fact and incident in Hellhound on His Trail is impeccably sourced, yet it has the narrative drive of a thriller. What did you think of the author’s treatment of the subject matter? When reading about a major historical event such as this one, do you prefer a narrative like the one Sides has constructed, one that re-creates the immediacy of the time, or a more straightforward timeline of events? How might this book differ from other nonfiction titles you may have read on the subject?

5. There are many who believe that James Earl Ray was part of a larger conspiracy and was set up to be the “fall guy” for King’s assassination. Based on the evidence the author presents in Hellhound on His Trail, do you believe Ray was the sole person responsible for King’s death? If so, why do you think theories of a conspiracy have persisted?

6. Talk about Ray’s escape from the Missouri State Penitentiary in Jefferson City and his time on the lam before arriving in Memphis. Would he have been able to remain as anonymous today as he did then? Talk about how society has changed since 1968: are people more or less trusting of loners like Ray nowadays?

7. In Chapter 2, the author describes King as having reached a point in his career where he had “slipped in stature, even among his own people.” Were you aware of this dip in King’s popularity, and if so, was it surprising to you? Talk about history’s perpetuation of legend: in highlighting the achievements of a man such as King, do any cracks in his reputation become repaired, or disappear, over time?

8. Chapter 4 details FBI director J. Edgar Hoover’s vendetta against King and his determination to expose King’s personal transgressions. But while Hoover and his staff regularly tried to leak salacious details to the press, in Sides’s words, “the media never took the bait.” Why do you think this was the case? How has the media evolved in the last 50 years, especially in matters regarding the private behavior of public figures?

9. Consider the political rise of George Wallace during this period, and the number of people—including James Earl Ray—who were galvanized by his presidential campaign, particularly his pro-segregationist, if not outright racist, positions. Does Wallace bear some responsibility for King’s assassination?

10. Do you see parallels between any of today’s political movements and George Wallace’s campaigns for office?

11. The manhunt that organized in the hours and days after King’s assassination was epic; most notably, more than 3,000 FBI agents took part, and it cost upwards of $2 million (which, adjusted for inflation, would be more than $13.6 million today). Considering how much Hoover despised King, was it startling that he mobilized the bureau to such an enormous extent to find his killer?

12. Martin Luther King “believed nonviolence was a more potent force for self-protection than any weapon,” (page 159). Given the threats he routinely faced—including the firebombing of his home in 1956 and being stabbed by a deranged woman in 1958—why did King nonetheless ban his staff from carrying guns or other weaponry?

13. “The bureau was well aware of the existence of bounties on King’s head,” (page 343). By not better protecting King in light of these threats, and for not realizing the impact his death would have on the nation, should the FBI have shared the blame for King’s death?

14. Book Two of Hellhound on His Trail opens with this quote from Shakespeare’s Hamlet: “For murder, though it hath no tongue, will speak with most miraculous organ.” Why did the author choose to include this quote? What do you think this quote says about Ray?

15. Was it surprising to read about how easily Ray was able to slip out of Memphis after the shootings? Could he have been stopped sooner? Do you think Ray could have gotten away with his crime if he committed it today?

16. As Ray flees Canada for Europe, his desperation becomes acute and he begins to make mistakes that leave him exposed. Why was he was able to remain on the run for as long as he did? Think about his two critical errors in London as he entered Heathrow Airport to board a flight to Brussels. Considering his meticulousness at other points while in hiding, why did Ray try to walk through customs with two slightly different passports and a loaded gun in his pocket?

17. Shortly after Ray pled guilty to killing King and was sent to prison, he began to recant his involvement in the assassination and asked to be put on trial. And in the late 1990s, members of King’s family—notably his son Dexter and his wife Coretta—came out publicly to urge that Ray have his day in court. Should Ray been given a trial?

18. “Throughout James Earl Ray’s life, the despair was panoramic. The family suffered from exactly the sort of bleak, multigenerational poverty that King’s Poor People’s Campaign was designed to address.” Consider this paradox that the author highlights. What led Ray to his life of crime? If King’s efforts had made a difference in the life of someone like Ray, would Ray have taken another path in life?

19. What would have happened if Ray himself was murdered, much like John F. Kennedy’s assassin, Lee Harvey Oswald, was killed by Jack Ruby? What benefits, if any, have come from Ray’s remaining alive (until 1998) and speaking out? If Ray had died in the act of killing King, would the collective reaction of the country—riots, unrest—have been the same?

20. There are many labels that have been applied to James Earl Ray, among them: insane, criminal, racist, loner, oddball. How would you characterize him?

21. What do you believe would have happened to the civil rights movement had King lived? Would anything be different today?

A native of Memphis, Hampton Sides is editor-at-large for Outside magazine and the author of the international best-seller, Ghost Soldiers (Doubleday), which was the basis for the 2005 Miramax film, The Great Raid. Ghost Soldiers won the 2002 PEN USA award for non-fiction and the 2002 Discover Award from Barnes & Noble, and his magazine work has been twice nominated for National Magazine Awards for feature writing. Hampton is also the author of Americana (Anchor) and Stomping Grounds (William Morrow). A graduate of Yale with a B.A. in history, he lives in New Mexico with his wife, Anne, and their three sons.

Here is a listing of some key books, websites, and programming readers may wish to consult after reading this book. Additionally, Hellhound on His Trail offers a complete bibliography of the author’s sources.

[note from LM: when “ROADS TO MEMPHIS” documentary is posted on PBS.org, I will add a link]

The Run of His Life