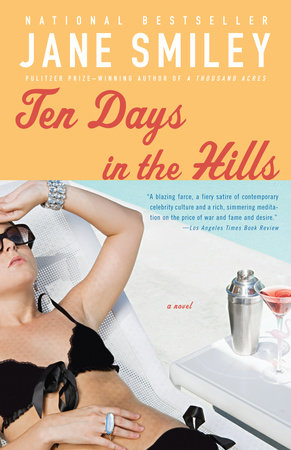 “A blazing farce, a fiery satire of contemporary celebrity culture and a rich, simmering meditation on the price of war and fame and desire.” —Los Angeles Times Book Review

The introduction, discussion questions, and suggestions for further reading that follow are designed to enhance your group’s reading and conversation about Jane Smiley’s Ten Days in the Hills, an extraordinary reimagining of Boccaccio’s Decameron set in the Hollywood hills in the early days of the Iraq war.

It is March 2003, and the war in Iraq has just begun. Max, a movie director, and his girlfriend Elena awaken on the morning after the Oscars to find that Max’s house is full of visitors. The new arrivals include Max’s 23-year-old daughter Isabel, his agent Stoney (who has long been Isabel’s secret lover), Max’s ex-wife Zoe, a beautiful movie star, and her spiritual teacher and lover Paul, Max’s old friend Charlie from the east coast, who is obsessed with his new regime of vitamin supplements; Zoe’s Jamaican mother Delphine and her best friend Cassie, and Elena’s son Simon, who has taken time off from college to act in a student-produced porn spoof. So begins an extended house party, as ten friends, lovers, and family members gather to talk, tell stories, eat and drink together for ten days.

1. The story opens just after the Iraq war has begun and Elena is thinking about the war, as she will throughout the novel. “Though no theory worked, she couldn’t help toiling at her theorizing. …Each new theory was accompanied by a momentary sense of uplift—oh, that was it—fear, native aggression, ignorance, disinformation and propaganda, a religious temperament of rules and punishments. But in the end, it was that they didn’t mind killing; they didn’t think killing had anything to do with them or their loved ones” [p. 22]. Why is Elena the character most affected by the outbreak of war? Are you sympathetic to her thinking? Is she the most morally engaged character in the novel, or is she, as Charlie thinks, over-reacting?

2. Consider the book’s structure: 10 characters spend 10 days together in two different houses. What happens? What develops? What is resolved, if anything? What is the effect of Smiley’s taking Boccaccio’s fourteenth-century premise (10 characters take refuge from the plague for ten days of pleasure and storytelling) and transposing it to 2003? [See Smiley’s description of The Decameron below]

3. A recurring comic allusion to what Elena calls “the manliness problem” is found at the beginning of the book with regard to Max, to Saddam Hussein, and to actors such as Hugh Grant and Ed Harris [p. 19]. Elena worries that, since “the Big Classic” is malfunctioning, she has unmanned Max with her fears about the war. What is “the manliness problem” and does it in fact relate to the war?

4. Consider the ways in which the three main couples—Max and Elena, Stoney and Isabel, Paul and Zoe—are sexually attuned to each other. What does Smiley seem to suggest about their relationships, given the ways they make love with each other? Does the sexual bond between Isabel and Stoney suggest that they should be together, despite the difference in their ages?

5. What does the juxtaposition of war with sex, food, storytelling and movie-watching signify?

6. Smiley describes the marriage of Zoe and Max as follows: “To Max (Elena was sure), Zoe felt like the main event of his life, but to Zoe (for some reason) Max felt like the opening act. Elena understood that this was a common pattern in Hollywood, where the calibrations of success, especially for ‘talent,’ were highly refined, and every marriage was simultaneously an assertion of who and how important you thought you were at a particular moment in your career and a sign of how you were to be treated by others” [p. 41]. Does the fact that Elena is not in the movie business mean that her love for Max (and his for her) is not bound to this hierarchy of social status?

7. Is Hollywood meant to be a microcosm of America, or is it seen to have a bizarre culture all its own? Why might Smiley have chosen to set her reprise of The Decameron in Hollywood? What is the relation between movies and storytelling, since both are so fundamental to the conversations and activities that we see throughout the novel?

8. In a discussion about a newspaper article on civilian deaths, Charlie stares aghast at Elena when she says, “The U.S. is a pariah in world opinion today” [p. 210]. Given the time that has elapsed since the beginning of the Iraq war and the publication of this novel, how do Elena’s fears and opinions come across? What might the book be like if the same ten people got together now, nearly five years into the war?

9. John Updike, writing in The New Yorker, observed that the novel’s “sexual descriptions set a new mark for explicitness in a work of non-pornographic intent. Smiley works in close focus, and from a male as well as a female point of view” (The New Yorker 1/29/07). Discuss what is unique or remarkable about Smiley’s descriptions of sex. What is she expressing about the emotional and physiological effects of touch and physical response, and what is particularly impressive about the descriptive prose in which she does so?

10. Sexual infidelity finds its place in the story when Zoe sleeps with Simon [p. 245]. Why does Simon punch Paul? Why does Zoe react as she does, and why do these events lead to her breakup with Paul?

11. Why is Paul an interesting character? Is he a charlatan? Is he wise? What do you think of his spiritual perspective, particularly in juxtaposition to the other characters and with the background of Hollywood?

12. Elena is a writer of self-help books like Here’s How: To Do EVERYTHING Correctly! She worries that she suffers from a form of obsessive-compulsive disorder and that because of her preoccupations she lacks a sense of humor. Does Elena come across as a likeable person? Why or why not?

13. On the seventh day the group moves to the Bel Air mansion of the Russian millionaire Mike. How does the change in setting affect the characters? Why might Smiley have chosen to move her characters to such a house?

14. Regarding Elena’s love for Max, we’re told, “what created this love was a suddenly vast sense of every story he had told her…" [p. 424]. Does this mean that Max has in a sense created himself, for Elena, out of stories? Or that she loves him for his past, his perceptions, and his sensibility? What does this statement tell us about the importance of the stories people tell each other?

15. In what ways is the novel funny? In what ways is it satirical? Consider the scene in which Cassie and Delphine plan to go food shopping and they survey the dietary needs and preferences of the group [p. 86]. Is the scene meant to stand, comically, in contrast to some other cultural or social reality?

16. Max’s movie Grace won an Oscar in the 1970s but his career hasn’t moved forward much since then. He does not seem troubled by this and doesn’t want to take Stoney’s advice about Taras Bulba. He would prefer to make My Lovemaking with Elena. Does it seem likely that either of these movies will see the light?

17. Consider what it would be like to make a list of the many movies mentioned or watched by the characters in the story, and to actually watch all of these films. How would it change your perspective on reality? On Hollywood? On the different ways that film and fiction tell stories?

18. The novel ends as Zoe receives the package containing the painting, which is not by Vermeer but instead by a woman artist named Judith Leyster, “the only woman artist of her day” [p. 449]. She is humming the song “So in Love,” and thinking about the girl in the painting. What is the effect of this ending?

On The Decameron, from Thirteen Ways of Looking at a Novel:
“Giovanni Boccaccio’s The Decameron … takes place during the Black Death. … Here were the characters … making up their minds to go out into the countryside, to take a break from the devastation, and to entertain themselves with stories. … They do find repose and they do entertain themselves, and most important for readers, with their tales and their discussion, they reconstitute what it means to be human and civilized even while civilization is disintegrating around them. And they do it with good humor rather than grief. Many of the stories are jokes; many of them are intended to evoke laughter and pleasure. … I thought it was a reminder of human resilience—not merely that humans survive, but that as they survive, they can’t help re-creating complex culture, which includes aesthetic, moral, political, sexual, and sensual ideas” [pp. 273-74].

Jane Smiley is the author of eleven novels, as well as four works of nonfiction. She is the recipient of a Pulitzer Prize, and was inducted into the American Academy of Arts and Letters in 2001. Smiley lives in Northern California.