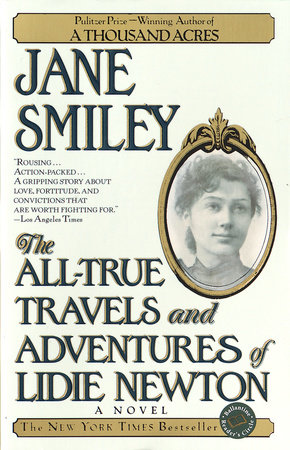 Six years after her Pulitzer Prize-winning best-seller, A Thousand Acres, and three years after her witty, acclaimed, and best-selling novel of academe, Moo, Jane Smiley once again demonstrates her extraordinary range and brilliance.

Her new novel, set in the 1850s, speaks to us in a splendidly quirky voice–the strong, wry, no-nonsense voice of Lidie Harkness of Quincy, Illinois, a young woman of courage, good sense, and good heart. It carries us into an America so violently torn apart by the question of slavery that it makes our current political battlegrounds seem a peaceable kingdom.

Lidie is hard to scare. She is almost shockingly alive–a tall, plain girl who rides and shoots and speaks her mind, and whose straightforward ways paradoxically amount to a kind of glamour. We see her at twenty, making a good marriage–to Thomas Newton, a steady, sweet-tempered Yankee who passes through her hometown on a dangerous mission. He belongs to a group of rashly brave New England abolitionists who dedicate themselves to settling the Kansas Territory with like-minded folk to ensure its entering the Union as a Free State.

Lidie packs up and goes with him. And the novel races alongside them into the Territory, into the maelstrom of “Bloody Kansas,” where slaveholding Missourians constantly and viciously clash with Free Staters, where wandering youths kill you as soon as look at you–where Lidie becomes even more fervently abolitionist than her husband as the young couple again and again barely escape entrapment in webs of atrocity on both sides of the great question.

And when, suddenly, cold-blooded murder invades her own intimate circle, Lidie doesn’t falter. She cuts off her hair, disguises herself as a boy, and rides into Missouri in search of the killers–a woman in a fiercely male world, an abolitionist spy in slave territory. On the run, her life threatened, her wits sharpened, she takes on yet another identity–and, in the very midst of her masquerade, discovers herself.

Lidie grows increasingly important to us as we follow her travels and adventures on the feverish eve of the War Between the States. With its crackling portrayal of a totally individual and wonderfully articulate woman, its storytelling drive, and its powerful recapturing of an almost forgotten part of the American story, this is Jane Smiley at her enthralling and enriching best.

1. Jane Smiley’s has lauded Harriet Beecher Stowe’s Uncle Tom’s Cabin for the artistry with which "the power of brilliant analysis" is "married to great wisdom of feeling." How does The All-True Travels and Adventures of Lidie Newton measure up to this standard?

2. Why does Ms. Smiley choose to describe Lidie’s adventures as "all-true" in the title of her novel? How would this work differ had the author chosen to turn her research into a narrative of nonfiction?

3. How does the novel authenticate as well as undermine myths about the North and the South in antebellum America? What traditional notions about frontier life, Westward expansion, and gender roles are confirmed or challenged?

4. After her husband’s death, Lidie describes herself as a "new person," one she "never desired or expected to be." What is the relationship of her former self to her present self? What are the roles of chance, will, and ambition in the shaping of Lidie’s life and character?

5. How does landscape function as a major character in the novel?

6. Of the Kansas Territory, Lidie writes, "you could easily act one way one minute and another way the next minute." What is the relationship between Lidie’s character in the place she inhabits? How does the K.T.’s lack of definition make possible her discovery of self?

7. Lidie leads a life of adventure as well as a life of the mind. How do her physical endeavors compare to her contemplative pursuits–particularly storytelling–in terms of defining her character?

8. Ms. Smiley said that the novel was born of her desire to explore "the intersection of ideology and violence in American life." What connection does the novel suggest exists between these two extreme forms of expression?

9. In what ways do the sensibilities of the abolitionists mirror those of the slave-holders? How does each group use religion and history to justify its perspective on slavery?

10. How does the manner in which Lidie and Tom handle the vagaries and challenges of their relationship affect the progress of the social change they are attempting? What relationship exists between one’s private life and public endeavours?

11. What purpose is served by introducing each chapter with an excerpt from Catherine Beecher’s A Treatise on Domestic Economy, for the Use of Young Ladies at Home?

12. Experience and reflection help Lidie to move from ignorance and innocence to some sort of understanding of herself and others, yet confusion and ambivalence persist. What is the value of leaving the reader in the company of a conflicted character?

13. Smiley has said that the purpose of great literature is "to help us face up to our responsibilities instead of enabling us to avoid them once again by lighting out for the territory." Does her novel fulfill this purpose? How?

14. What connection lies between gender and violence? What is the significance of Lidie pursuing revenge disguised as a man?

15. What can the reader of Lidie Newton discern about morality and violence? Are the K.T. Free Staters justified in pursuing freedom through violence? What are the antecedents and repercussions of this issue in America?

16. Lidie Newton provides a novel perspective on antebellum America. What other historical events need telling from a woman’s point of view?

17. Conjecture about the course of Lidie’s adventures had Thomas not died. What are the repercussions of his presence and absence in her days?

18. How do the characters Papa and Helen Day contribute to the moral complexity of the novel? What is the significance of such complexity? Does the character of Lorna deepen or diminish it?

19. In an essay on The Adventures of Huckleberry Finn, Jane Smiley reproached Mark Twain for presenting a facile standard of heroism in his novel. She wrote: "All you have to do to be a hero is acknowledge that your poor sidekick is human; you don’t actually have to act in the interests of his humanity." Does Lidie successfully act in the interest of Lorna’s humanity?

20. "A writer who does not passionately believe in the perfectibility of man has no dedication nor any membership in literature," wrote John Steinbeck. What can one say about Ms. Smiley’s perspective on such perfectibility given this novel? Does her work leave one with a sense of optimism? What is the novel’s defining tone?

21. When presented with the opportunity to share the story of her experiences with Lorna, Lidie hesitates. "I was disinclined to do this, and I pondered my disinclination at length," she explains. "Did I owe it to Lorna to tell her story to the world?…Mr. Thayer’s friend candidly admitted one thing–Lorna herself would never benefit from my telling her story." What is the value of Lidie telling Lorna’s story? Of Ms. Smiley telling Lidie’s? What can literature accomplish?

Jane Smiley is the author of eight previous works of fiction, including The Age of Grief, The Greenlanders, Ordinary Love and Good Will, A Thousand Acres (which won the Chicago Tribune Heartland Prize), and Moo. She lives in northern California.
Learn More About The All-True Travels and Adventures of Lidie Newton
print