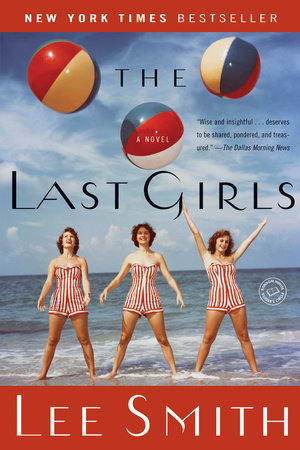 1. Harriet dubs the four women on the river cruise "the last girls."  What does she mean by this name?   How is The Last Girls an appropriate title for the novel?

2. Author Lee Smith writes The Last Girls in the third person, but devotes chapters to different, alternating points of view.  What affect does this shifting narrative viewpoint have on the story?  How does Smith make each narrative voice a distinctive and unique one?

3. What do the four "last girls" have in common?  How has each changed since her first trip down the river?  Is there one character here that forms the emotional center of the book?  If so, who is it, and why?

4. How does the riverboat cruise compare with the first trip that the girls took down the river?  How does Mr. Gaines, the professor that inspires the raft trip, affect them-both academically and on a personal level? What expectations do the women have on each trip?  How do the two voyages each constitute a rite of passage?

5. Does The Adventures of Huckleberry Finn inspire the girls during the raft trip? How?  Why does Mark Twain’s novel achieve particular resonance during the girls’ college years?  How do they grapple with racial and social issues similar to those that Huck faces?

6. All of the first-year suitemates take the same creative writing class, where they meet Catherine.  What motivates each of them to enroll in the class?   Which ones are the most ambitious about writing, and how do they hone their craft?   How do they view one another as writers?

7. The novel features excerpts of Baby’s poetry and Anna’s romance novels.  What does the inclusion of this writing add to your understanding of both these characters? Why don’t you see passages by Courtney, Catherine and Harriet?  What do you imagine that their writing would be like?

8. Harriet, Catherine, Anna, Courtney and Baby each come from very different family backgrounds.  In which ways do their families shape the girls’ personalities?  Who is more apt to rebel against her family, and who strives to make them proud?  By your estimation, who is the closest at achieving a happy medium between the two?

9. The women go on the river cruise in order to dispose of Baby’s ashes. How does each of the women remember Baby? What does Baby represent to each of the four "last girls?" How do they express any emotion about Baby’s death?


10. What is Harriet’s first impression of Baby, and how does her view of her roommate evolve during their tenure at college? In which ways is Harriet an insightful observer of her roommate?  How does Baby puzzle and frustrate her?

11. How does Harriet grow and evolve during her college years?  Do you think that this evolution is due to Baby’s influence?  What other factors prompt Harriet to change?  How would you characterize the relationship between the two roommates?  Do Baby and Harriet’s mother, Alice, share any similarities?  What are they?

12. Anna refers to the girl who entered Mary Scott College as an "earlier incarnation" of herself, a child whom she barely remembers.  How does Anna invent a new personality?  What characteristics of her former self does she muffle in order to do so, both during her college years and beyond?  Do any of the other girls try to do the same?  Do they succeed?

13. Courtney laments that she’s only done "the right thing" in her life.  What are some examples of this tendency?  Which of the other girls might share her complaint?  Which girls would be more likely characterized as "free spirits"?  Were there any penalties incurred for being a "wild child"?  What were they?

14. What factors, both internal and external, propel Courtney into marriage?  What are her feelings about being alone?  Why doesn’t she leave Hawk early in her marriage, despite her threats to do so?  How do Hawk, Courtney’s husband, and her lover, Gene, compare to one another?  What attracts her to both men?

15. Of Jeff and Baby’s relationship, Harriet opines, "It was like being in love herself, but not as scary."  How does this statement embody Harriet’s attitude about life and love?  How does it portend things to come, particularly in terms of Harriet’s romantic relationships?  In your opinion, why do Baby and Jeff embrace Harriet’s involvement in her relationship?  What role does Harriet play in it?

17. Catherine "can’t remember a time where she wasn’t married, or at least where she wasn’t with a man."  In which ways is this characteristic of her personality?  How is it uncharacteristic?  During their college years, what attitudes does each of the women have about male companionship?  Do these views shift with age?  Do any the women adhere to the notion of "one true love?"

18. The only male figure with a voice in the book is Catherine’s husband, Russ.  How does he provide a unique viewpoint?  In particular, what do you learn about Catherine through his perspective?  Why do you think Lee Smith chose to include him in the novel?

19. Why does Anna forsake her more literary ambitions and begin to write romances?  What purpose do these books serve in her life and in the lives of others around her?  What attitude does she hold toward Baby and her writing ability?  Toward Harriet and Harriet’s writing students?

20. Courtney categorizes herself as the woman who always does what is right.  How do her rules of "how to be a lady" guide her life?  In which ways does she embrace their framework?  How does she resent them?

21. In your opinion, does Courtney feel the same way for Gene as he does for her?  Why does he force an ultimatum, and why is she unwilling to give him an answer?  What does Gene represent to Courtney?  Do you think that her response to Gene’s demand would have been different if Hawk had not been ill?  Why or why not?

22. Why do you think that Pete is attracted to Harriet?  What about her is appealing to others around her, both male and female?  Do you think that Harriet is persuaded to stay in New Orleans with him by the end of the novel?  Why or why not?

23. Mr. Stone’s death on the ship is sudden and unexpected.  How does it affect Russ?  Is there a parallel to be drawn between Mr. Stone’s behavior and Russ’s own actions? What is it?

24. Russell speaks of a "butterfly effect," in which one small act has vast repercussions on the rest of the world.  Does each of the girls have a butterfly effect that has shaped her life?  What are these occurrences, and what are the ramifications of each?  Do you believe in the idea of a butterfly effect?  Why or why not?

25. Reflecting on her years at Mary Scott, Harriet admits she was probably in love with both Baby and Jeff.  How does she show these feelings?  Why doesn’t Harriet keep in constant touch with Baby over the years?  Do you think that Baby attempted to contact her?  Why or why not?

26. Anna says that her mantra is "be here now."  In which ways does she live by this philosophy, and how does she retreat from it?  If each of the other women had a mantra, what would it be?

27. In your opinion, why doesn’t Catherine immediately tell Russ about the lump in her breast?  Why doesn’t she confide in her friends?  How is her attitude about the situation indicative of her personality?

28. At the end of the book, Harriet wonders if perhaps Baby was happy, after all.  What evidence supports this view?  How is Charlie Mahan’s letter convincing?  In which ways might it be misleading?

29. Baby’s death is labeled an "accident."  Do you think it was one?  What do you surmise about Baby’s emotional well-being?  What instances in the book lead you to draw those conclusions?  What are the arguments for her accidental death?  For her suicide?

30. The ending of the book is an open one.  What do you think becomes of Courtney, Catherine, Anna and Harriet after their trip?  Which women seem poised to embark upon new chapters in their life?

31. The novel’s last pages provide an account of the others who went on the rafting trip.  How do these women figure into the friendship between the four girls on the cruise and Baby?  In which ways are the blurbs a typical "where are they now"?  How are they unconventional in form, style and tone?   Why do you think Lee Smith uses them to close the book?

Learn More About The Last Girls
print
Back to Top