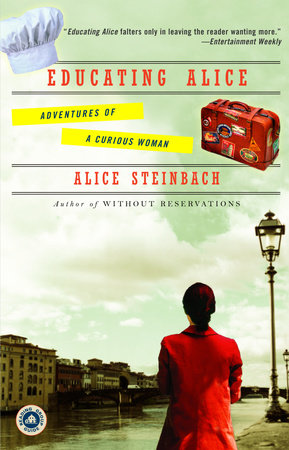 1. For years Alice Steinbach was a reporter and columnist for the Baltimore Sun, but quit her job in order to take the journeys described in this book. In what ways is her background as a reporter evident in the way she writes and travels? In what ways has she managed to make a break from the habits of her former career in some of the adventures she describes in Educating Alice?

2. In the piece “Cookin at the Ritz,” Alice gives us a good sense of the seriousness with which the French take their cooking. Can you imagine an American equivalent to “Chef,” in the same profession or another one? Do you think it is part of our culture to hold teachers and professionals in such reverence, or is this a more old-world, traditional attitude?

3. In what ways did “Dancing in Kyoto” change your attitude toward Geishas? Alice writes that she would not want a daughter of hers to be a Geisha, and yet many Japanese see it as a highly desirable profession. Can you explain why they feel this way?

4. Alice quotes an admonition by Henry James, that a writer must be “one of the people on whom nothing is lost.” In what ways does Alice’s own writing reflect her belief in this remark? Do you think the majority of authors would subscribe to this point of view, or can you name some would probably disagree with it?

5. In The Mystery at the Old Florentine Church, Alice becomes fascinated by the story of Father Domenico’s Church. In The Unreliable Narrator, she is absorbed by the story of “Lily.” What similarities do you see in these two experiences, and what do they reveal about the way Alice travels?

6. Think about Alice’s relationship with Naohiro. Why do you think she seems to focus on it only intermittently? Do you believe she is content with it? Have you ever had a distant-yet-close relationship with someone, and do you consider overall as a positive or negative experience?

7. Most people find it lonely and sometimes frightening to travel alone. If you were given the opportunity and time to take the same trips Alice took in this book, would you go? How do you think your experiences would compare to hers?

8. After much deliberation, Alice chose the subjects she would study and the places where she would learn about them. If you had to make a comparable list of half a dozen subjects and locations for your journey, what would they be?

The Piano Shop on the Left Bank