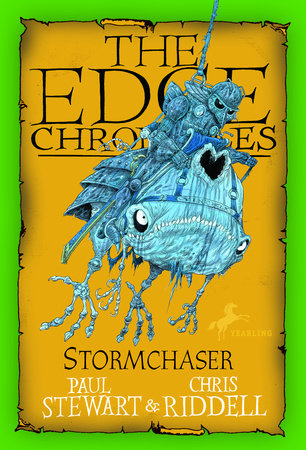 Twig lives as a sky pirate alongside his famous father, Cloud Wolf, until the Stormchaser is damaged due to Twig’s inexperience. A furious Cloud Wolf leaves Twig behind on their next quest for the sacred material stormphrax. Not knowing that individuals are plotting to profit from the booty, Cloud Wolf sets out on his quest, unaware that Twig has stowed away. A terrible mutiny and raging storm forces the crew to abandon ship with Cloud Wolf still aboard, and Twig becomes captain. Without a ship and stranded in the Deepwoods, it’s up to Captain Twig and the crew to return, not only with stormphrax, but with the knowledge of how to harness its power for the common good.

• A friendly slaughterer pedaling lucky charms tells Twig, “Fear of the unknown is for the foolish and weak . . . for my money, what is known is generally far more frightening.” (p. 10) Do you agree with this statement? Why or why not? What that is “known” is frightening to you?
• After Twig sees Screed Toetaker’s supply of stormphrax, he becomes enraged that he was unable to find the substance. Professor of Light says, “Ah, Twig . . . ends and means.” (p. 284) Discuss the phrase the end justify the means. In this situation, do the ends (restoring the Sanctaphrax treasury with stormphrax, and from it, producing water-cleansing phraxdust) justify the means (the murder of hundreds of people)?

• It is impossible for a book that is so packed with vivid detail to have an illustration for each bit of action. Discuss the events in the story that have accompanying illustrations, and why these events were chosen. Have students illustrate, in a line drawing, one scene that does not have an illustration.

Edge Chronicles: The Curse of the Gloamglozer

Edge Chronicles: The Last of the Sky Pirates

The Sinister Sweetness of Splendid Academy

Ms. Rapscott’s Girls
Back to Top