Edge Chronicles: The Last of the Sky Pirates Teacher’s Guide 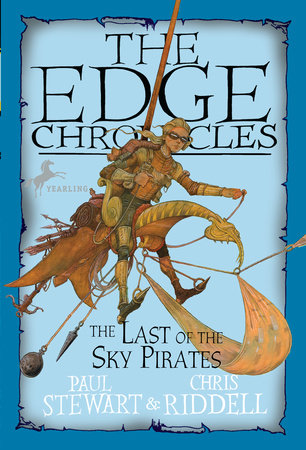 Edge Chronicles: The Last of the Sky Pirates Teacher’s Guide

Fifty years after Captain Twig severed the anchor chain securing the floating rock of Sanctaphrax to Undertown, all is not well in the great
floating city or the urban sprawl of Undertown. Rook Barkwater is selected as a Librarian Knight elect, and seeks to train in the reeglades.
Along the way, Rook encounters personal failure, betrayal, and near death. Rook ventures out into the Deepwoods to continue his studies,
and he meets the famous sky pirate, Captain Twig. Together, they journey back to Undertown in the Skyraider to stage a dramatic rescue mission atop the horrible Tower of Night.

• Rook is transported beyond the squalor of the sewers through reading and his quest for knowledge. How can being educated elevate a person beyond the circumstances of their life, such as being born poor or not being from a “connected” family?
• On page 45, during the announcement ceremony Rook swears to “serve Edge scholarship, both Earth and Sky, for the good of all” with his heart and his head. Discuss the meaning of this pledge. How does Rook fulfill his sworn vow as the story unfolds?

At the end of the book, Rook, Cowlquape and Wumeru the Banderbear witness Captain Twig being carried away by the caterbird. (p. 364) Have students work in teams to create an additional chapter to this volume that will be the start of a new volume that picks up on Twig’s arrival at Riverrise. (Riverrise is described in Chapter Eighteen of Midnight over Sanctaphrax).


Learn More About Edge Chronicles: The Last of the Sky Pirates
pdf

The Mystery of the Emeralds
Kathryn Kenny

Corydon and the Island of Monsters
Tobias Druitt

The Mage of Trelian
Michelle Knudsen

The Threads of Magic
Alison Croggon

Midnight at the Barclay Hotel
Fleur Bradley
Back to Top