The Prince of Frogtown Reader’s Guide 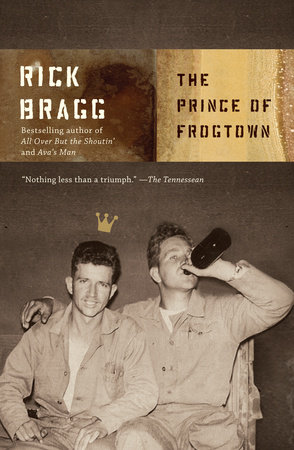 The Prince of Frogtown Reader’s Guide

"Nothing less than a triumph."
—The Tennessean

The introduction, questions, and suggestions for further reading that follow are designed to enhance your group’s discussion of Rick Bragg’s The Prince of Frogtown, the powerful completion of the trilogy that includes the critically acclaimed bestsellers Ava’s Man and All Over but the Shoutin’.

In The Prince of Frogtown, Rick Bragg explores the life of his father, a man who occupied only a few pages in his previous books "but lived between every line" [p. 13]. The largely absent Charles Bragg occupied only a few months in his son’s life and Rick Bragg hardly knew him. The Prince of Frogtown is Bragg’s attempt to take the full measure of his father’s life, learning all he can, both good and bad, about the man he had wanted to erase or rewrite or simply refuse to acknowledge. The writer Willie Morris tells Bragg that his father is inescapable, that he must write about him: "My boy," he said, "there is no place you can go he will not be" [p. 12]. But Bragg must go to his mother and his father’s friends and relatives to get to know the man whse absence has haunted his life.

Bragg is a brand new stepfather himself, having married a woman with three sons, the youngest of whom is only eleven. This boy is as unlike him as any boy could be. While Bragg grew up in the hardscrabble world of working-class Appalachia, where he learned how to leap across creeks, settle scores with his fists, cuss and spit and dream about driving Corvettes, the boy who comes into his life is a gentle creature who loves to read and go to church and actually enjoys obeying his mother. "I have read of boys in plastic bubbles who had more adventure," Bragg writes [p. 73]. It is this new role as a reluctant and ill-prepared father that, in part, sparks Bragg’s need to know his own father’s story.

And Charles Bragg’s story is not a happy one. Through talking with his father’s friends, especially his closest friend, Jack Andrews, his wife, and surviving relatives, Rick Bragg reconstructs not just the story of his father’s life but comes much closer to having a felt sense of who he really was. It is a story of hard drinking and hard fighting, intermittent employment, long absences, a running feud with a dictatorial police chief, Ross Tipton, and a horrifying experience in the Korean War that would push his drinking into a fully destructive alcoholism. Abusive to his wife and children, unable to provide for them, unable to stop drinking or to rein in his propensity for risk and violence, he is hardly a father at all. And yet, Bragg learns from Jack that his father talked about his wife and children all during his final days and felt deep remorse for the man he had become. Bragg also learns of some of his father’s best moments, when he showed incredible courage, humor, playfulness, and a sense of honor.

What is most remarkable, though, is the father Rick Bragg is able to become, given the father he had. The interspersed chapters that deal with Bragg’s relationship to "the boy" are profoundly moving and funny and surprisingly tender. That he is able to act as teacher, showing the boy how to throw a punch, how to establish himself forcefully on the basketball court, how to experience the rough-and-tumble joys of being a boy, while at the same time adjusting himself to the many ways the boy is different from him is one of the great triumphs of the book. For fans of Rick Bragg’s family memoirs, Ava’s Man and All Over but the Shoutin‘, The Prince of Frogtown offers a fully satisfying, if bittersweet, sense of completion.

1. Why does Rick Bragg now feel compelled to write about his father, a man he had dismissed as "nothing more than the sledge I used to pound out [his mother’s] story of unconditional love" [p. 10-11]?

2. In what ways is Bragg’s new stepson, "the boy," different from him? How does Bragg react at first to the boy? How does their relationship change over the course of the book?

3. "The thing that outsiders never understood about old country music, the music derived from Irish ballads and mountain folk songs," Bragg writes, "was that the sadder it was, the better it made you feel. It told you that you were not alone on this miserable rock, not fighting anything special, anything new" [p. 156]. Does reading The Prince of Frogtown have a similar effect? How does Bragg manage to make what is by and large a sad story so much fun to read?

4. In what ways do family history and social history intersect in the life of Charles Bragg? How do working conditions and class divisions in Jacksonville, Alabama, as well as the drinking habits of his own father, affect the kind of man Charles Bragg becomes? What other major events play a decisive role in shaping his character and determining his fate?

5. Bragg writes that everything he knew about being a father was wrong, but what kind of father does he turn out to be? What effect does he have on his stepson?

6. In the Prologue, Bragg writes: "In this book I close the circle of family stories in which my father occupied only a few pages, but lived between every line" [p. 13]. In what ways does The Prince of Frogtown fill out the portrait of Bragg’s family life that he began in Ava’s Man and further explored in All Over but the Shoutin’? In what ways was Bragg’s father a hidden but powerful presence in the earlier books?

7. Why are memoirs about family life so compelling? Why would so many people, from such a wide array of backgrounds, many of them quite different from Bragg’s own, find a story about his family so engaging?

8. Bragg says that his father’s friend Jack "does not merely tell me he loved my father, he shows me, painting pictures on the dark…" [p. 138]. How does Bragg himself show rather than tell how people feel throughout the book? What are some of the most vivid and emotionally revealing scenes in The Prince of Frogtown?

9. Bragg writes about people who don’t often make it into the pages of bestsellers—drinkers and brawlers, people who work in the cotton mills, or cleaning other people’s houses, people who are poor but proud and live in towns like Leesburg, Blue Mountain, Piedmont, and Jacksonville, in the foothills of the Appalachians. What makes these people so fascinating to read about? Why do they so seldom appear in the pages of American literature?

10. What does the book as a whole say about fathers and sons? How is Bragg able to become such a good father, in spite of having grown up with a father her barely knew and who was such a terror when he was present?

11. Why does Bragg’s mother decide to return to Jacksonville even though the family seems to have created a much better life for themselves in Dallas? Does she make the right decision? What effect does her leaving have on her husband?

12. Charles Bragg at first appears to be a somewhat one-dimensional man-a bad father who mistreats his family and drinks himself to death. How does Bragg create a much more nuanced portrait of his father? How is Charles Bragg remembered by those who knew him better than Bragg did himself? How should he finally be judged?

13. What are some of the funnier moments in The Prince of Frogtown? What makes Rick Bragg’s self-deprecating sense of humor so engaging?

14. Near the end of the book, after he fails to secure an early release from prison for his youngest brother, Bragg writes: "I am sick of this, I thought, sick of this cycle, sick of being at the mercy of something as insignificant as a drink of alcohol" [p. 246]. Just how destructive a force has alcohol been in Bragg’s family, and in the mill-town where he grew up? What tragedies can be directly linked to alcohol in the book?

15. What makes the ending of The Prince of Frogtown so bittersweet? Why is this way of ending the book so fitting for the story Bragg has told?

Rick Bragg is the author of two bestselling memoirs, Ava’s Man and All Over but the Shoutin’. He lives in Alabama.

Life Is So Good
George Dawson and Richard Glaubman

Please Be with Me
Galadrielle Allman

Shot in the Heart
Mikal Gilmore

The Fall of the House of Zeus
Curtis Wilkie

. . . And His Lovely Wife
Connie Schultz