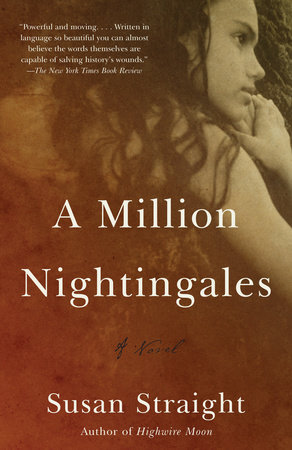 “Powerful and moving. . . . Written in language so beautiful you can almost believe the words themselves are capable of salving history’s wounds.”
—The New York Times Book Review

The introduction, discussion questions, author biography, and suggestions for further reading that follow are designed to enhance your group’s discussion of A Million Nightingales by Susan Straight. Narrated in the spare yet poetic voice of a woman born into slavery, it is a stunning exploration of race, class, power, and exploitation in antebellum Louisiana.

Born on a sugarcane plantation in southern Louisiana, Moinette is the daughter of Marie-Thérèse, an African-born slave, and a white man, a visiting sugar broker who was given Marie-Thérèse as “a gift for one week, a nighttime present” [p. 5]. Moinette grows up under her mother’s sheltering eye, learning to hide her natural curiosity and intelligence from the white people she serves, her beauty from black and white men alike. As the personal maid to the master’s daughter, Céphaline, she listens in on her mistress’s lessons and begins to grasp the basics of reading and writing. But when Céphaline dies, even her mother’s love cannot protect Moinette, and at fourteen she is sold to another plantation. In a slave society that condemns her to wanton cruelty and sexual exploitation, and eventually tears her away from her own young son, Moinette holds fast to her inner life, drawing strength from her memories of her mother and from the unexpected kindnesses of a few caring whites.

A Million Nightingales captures the horrors of slavery with a searing immediacy. Through Moinette’s ever-vigilant eye, it offers a rare view of the impact of draconian laws and inhumane conditions on the slave population and exposes the malfeasance and moral failings of the whites who allowed the system to flourish.

1. A Million Nightingales is set in Louisiana just after the territory was purchased by the United States. How do the history, culture, and demographics set the region apart from the rest of the United States at the beginning of the nineteenth century? Why is it a particularly apt setting for the story Straight tells?

2. Discuss the various ways whites and blacks regard Moinette and other people of mixed blood. Consider, for example, Christophe’s mockery of Moinette [p. 5]; Marie- Thérèse’s reaction to Hera’s questions [p. 13]; the conversation between Msieu Antoine and Madame de la Rosière [p. 138]; the attitudes of both Pélagie and Monsieur Ebard when Moinette is forced to spend the evening with him [p. 158]. What do these incidents–and others throughout the book–reveal about factors that influence the characters’ opinions about race? In what ways are they affected by their cultural backgrounds and personal experiences?

3. How do Moinette, Marie-Thérèse, and the other slaves hold on to their individuality in a world that considers them little more than property? How do the ties they form with one another reflect both the tentativeness of their lives and the human need for connection? What specific incidents illustrate the ways slaves circumvented the rules–and avenged the humiliations and cruelties–of the plantation system?

4. In explaining why she doesn’t sleep in a bed, Marie-Thérèse says, “It is frightening to be so rested” [p. 15]. How does Moinette incorporate this warning in her own life? Does it help her survive the many hardships she faces? What are the emotional repercussions? In what ways is Moinette touched and guided by Marie-Thérèse’s other lessons, especially her stories about her own past and her retelling of various Senegalese legends?

5. What insights does A Million Nightingales offer into white society and the values that shape it? What is the status of women within the plantation households? Citing specific examples, do the women tend to be more or less sympathetic to the slaves than the men? How does Straight use the relationships between white men and women to illustrate the fundamental flaws in the slave-based economy? Discuss, for example, the wider ranging implications of Céphaline’s acknowledgment that “My task is to make money by marrying”[p. 51] and Pélagie’s acceptance of the fact that despite her beauty and social standing, without a dowry she is unlikely to marry successfully [p. 176—177].

6. After she is sold away from her mother, Moinette vows, “I would never belong to anyone. I would never love anyone” [p. 132]. Does her rejection of the possibility of love make her life more or less difficult? Do her reactions to the expressions of love she sees between men and women, and between mothers and children [p. 163, for example], confirm or belie the reasoning that motivated her to make her vow?

7. How does the birth of her son, Jean-Paul, simultaneously liberate and constrain Moinette? Unlike her mother, Moinette is forced to leave her infant in the care of others. What are the emotional consequences for both mother and son of this enforced separation? Is it only external circumstances that make it difficult for Moinette to form a bond with her son as strong as the one she had with her mother?

8. Discuss Moinette’s rejection of Hervé Richard and the chance to escape [p. 203]. Is her choice instinctual, one that any mother would make? In what respects does it represent the convergence of Moinette’s real-life experiences and the inner life she’s created? Does it mark a psychological turning point for her?

9. When she is taken to Opelousas, Moinette declares, “I hated Msieu Antoine. I had not hated the Bordelons . . . . I had not hated the de la Rosières” [p. 212]. What accounts for the vehemence of her feelings about her new master? What does it convey about Moinette’s sense of self-awareness and her deepening understanding of and antipathy to the world she lives in?

10. In addition to the day-to-day freedom he allows Moinette, what distinguishes Msieu Antoine from her previous owners? How would you describe the relationship that evolves between the two of them? To what extent is it a pragmatic arrangement that protects them from public scrutiny and questions? Even before Msieu Antoine grants Moinette her freedom [p. 282], what indications are there that they understand one another in an intimate, perhaps surprising, way?

11. The title of the novel comes from a song Jonah Greene remembers his grandmother singing [p. 285]. Why does Straight choose Greene, a Jew and a homosexual, to speak these words?

12. Greene and Tretite are both sharply critical of Moinette’s purchase of a young boy [p. 285]. Do you share their points of view or do you think Moinette’s act can be justified? Why does Greene lend Moinette money to buy her own son, even though it makes him “feel infected” [p. 290]? Does a world built on injustice and the oppression and dehumanization of whole groups of people necessitate the suspension conventional morality? Does Moinette’s purchase of her son, and subsequently, of two young girls, represent an alternative moral code, one that draws on the most basic ideals of human decency?

13. In the course of the novel several people, black and white, male and female, become Moinette’s mentors or protectors. How does Moinette decide which people to trust? What qualities help her gain the trust or admiration of others? Does she knowingly manipulate the impression she makes on people in order to gain their favor or protect herself? What, if anything, do the people who help her gain from their relationships with Moinette?

14. There are several recurrent symbols into A Million Nightingales. Looking at various passages [pp. 6, 50, 59, 136, among others], discuss the significance of animal imagery. Blood is another potent symbol in the novel. How do literal, as well as metaphorical, references to blood underline the themes and the impact of the novel? The word “passage” occurs frequently in Moinette’s descriptions and musings. Why does Moinette’s use of this word resonate beyond her immediate story?

15. Is A Million Nightingales a story of triumph? Is it a political and/or feminist novel? Did it change some of your beliefs about slavery? Which scenes did you find the most upsetting and why? Were you surprised by the intimacy and genuine affection in several of the relationships between slaves and owners Straight depicts?

16. What does A Million Nightingales share with–and how does it differ from–other works about the African American experience you have read? What insights does it give you on the legacy of slavery in this country? In what ways is its message relevant today?

17. In Narrative of the Life of Frederick Douglass, Douglass wrote, “You have seen how a man was made a slave; you shall see how a slave was made a man.” Can A Million Nightingales be read as a female version of the same journey? If so, how does Straight, a white women writing in the twenty-first century, achieve this? Discuss, for example, Moinette’s tone and the language she uses; the evocative descriptions of various rural and urban settings; the historical facts (the restrictions spelled out in the Slave Code, for example); and cultural customs and biases (French, American, and African) Straight weaves into the narrative.

Susan Straight is the author of five previous novels, including the bestselling I Been in Sorrow’s Kitchen and Licked Out All the Pots and Highwire Moon, which was a finalist for the National Book Award. She is a regular commentator for NPR, and her writings have appeared in Harper’s Magazine, The New York Times, Salon, McSweeney’s, among many other publications. She lives in Riverside, California.

Why Are We in Vietnam?
Norman Mailer

Down to a Soundless Sea
Thomas Steinbeck

Orphans of the Carnival
Carol Birch

Beside a Burning Sea
John Shors

Across the Endless River
Thad Carhart

The Honeymoon
Dinitia Smith
Back to Top