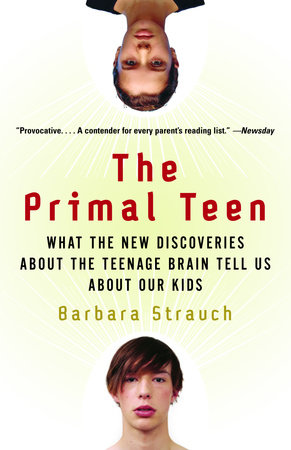 The Primal Teen is the first book to provide a solid, scientific explanation of the mysterious, infuriating, and downright weird behavior of teenagers. Written by the health and medical science editor of The New York Times, it is filled with findings that will change the way parents–and teens–navigate the treacherous waters of adolescence.

A mother paces the living room, waiting for her sixteen-year-old son to come home, hours past his curfew. When he finally saunters in, he answers every question with a blank stare, and finally dashes to his room and slams the door. The mother, stunned and angry, thinks, It’s just hormones, right?

Wrong. While raging hormones and an inclination toward rebellion are major players in the teenage drama, an area north of the gonads is directing the show: the brain. In The Primal Teen, Barbara Strauch presents a fully accessible look at the cutting-edge science that is providing vital new information about what makes teens tick.

Strauch not only explains these breakthrough findings, she shows that understanding them can lead the way to a saner and smoother relationship between parent and child.

1. For many years, most people thought the adolescent brain was finished, cooked, just sitting there waiting for all that Chaucer, all that calculus, all that parental caution to pour in. Now, as Strauch writes, we are finding that’s not the case. In fact, the teenage brain is still a work in progress, first bursting with new growth and then pruning back brain cells and brain branches, a process that continues well into a person’s twenties. Does this surprise you?

2. The main explanation for a lot of teenage behavior has been the rampaging hormones of adolescence that bring on moods and misbehavior. Is it also possible that teens misbehave and ignore parental authority and advice because their brains are not fully grown? What influence do you think hormones have on behavior?

3. One of the places that is still under construction in the teenage brain, according to the research outlined in The Primal Teen, is the prefrontal cortex, the area that helps us see consequences of our actions and enables us to plan ahead. Could this be one reason that teenagers often do not seem to see the full consequences of their actions? Is this just another excuse for teenage behavior or does it help us to understand why they act the way they do?

4. As Strauch reports, a number of scientists have suggested that teenagers may not see the world as we see it and may respond with different areas of their brain. In particular, in stressful situations, they may respond more quickly with their more primal, emotional part of their brain because the frontal cortex, the more rational part, is not yet fully wired. If this is so, are there ways, as parents or teachers, that we can adjust our responses to teenagers?

5. Does the lack of a fully functioning prefrontal cortex contribute to a teenager’s attraction to and assessment of risk?

6. Because the brain is still changing so dramatically in young people, new research shows that heavy drinking and drug taking may damage memory functions in the brain. And, in addition, negative experiences such as bullying or abuse can permanently reshape the pathways of the brain. What can be done in schools and at home to combat this?

7. Why don’t teenagers seem to listen? Is it true that teenagers have a difficult time holding onto several instructions at once? One neuroscientist has found that it helps, when dealing with her teenagers, to ask them to do one thing at a time, rather than tell them to brush their hair, clean up their rooms, and empty the dishwasher–and being met with the stare of inaction.

8. If we are dealing with a developing brain–one that is not the same as an adult’s–at what point can we assume that the brain is mature enough to be held responsible in the same way adults are held responsible? Do you think that this new brain science will just be used as another excuse to go easy on teenagers?

9. Are there some aspects of adolescence–the teen sense of humor, the increasing ability of teenagers to understand abstract concepts–that we should focus more on and, instead of despairing, actually celebrate?

10. Is the news that a teenager’s brain is still developing a basically hopeful message? Why?

BARBARA STRAUCH is the health and medical science editor of The New York Times. She lives in Westchester County, New York, with her husband and two teenage daughters.


From the Hardcover edition.
Learn More About The Primal Teen
print

The Social Neuroscience of Empathy

Rise of the Girl
Jo Wimble-Groves

Speaking of Apraxia
Leslie A. Lindsay

From Strength to Strength
Arthur Brooks

The Discovery of the Child
Maria Montessori

What Do You Say?
Edward Suffern Johnson, Bill Stixrud and Ned Johnson