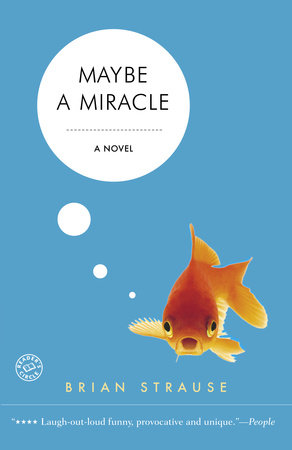 1. Why do you think the author chose the quote from Albert Einstein to serve as the epigraph for Maybe a Miracle, and how does it apply to the main characters of the novel? Do you agree with Einstein’s contention?

2. Beginning with its title, the novel raises questions about the existence and nature of miracles. According to Merriam-Webster’s Unabridged Dictionary, the word can refer to “an extraordinary event taken to manifest the supernatural power of God fulfilling his purposes,” “an event or effect in the physical world deviating from the laws of nature,” and “an accomplishment or occurrence so outstanding or unusual as to seem beyond human capability or endeavor.” Which of these definitions do you think applies best to the events of Maybe a Miracle, and why?

3. Virtually every occurrence surrounding Annika that is labeled miraculous by various characters has a scientific explanation offered as well, from the rose-petal shower to the stigmata. Does the existence of a scientific, rational explanation preclude the miraculous? If not, how do you decide which standards to apply and which to reject in evaluating a possible miracle?

4. Is there room for miracles in a scientific worldview? In other words, can a person believe in miracles yet also believe in the validity
of the scientific method? Are science and religion fundamentally at odds, as so often seems to be the case today in such controversies as the teaching of evolution and intelligent design, abortion, and the right to die? Think about this in relation to the epigraph, which comes, after all, from one of the greatest scientists of the twentieth century.

5. Are miracles proof of God’s existence, or are they just an indication that we still have a lot to learn about the physical laws that govern the universe?

6. Monroe’s attitude toward the Catholic Church and its priests is harshly negative, influenced by ongoing scandals involving pedophilia by priests and its cover-up by the church hierarchy. Why do you think Monroe is so focused on this aspect of the church? In your opinion, is the presentation of organized religion in the novel a fair one?

7. Is there anything about Annika that sets her apart before her accident? Does she seem changed in any way after she awakens from the coma?

8. Do you believe that God or some other force is working through Annika, or is Annika herself somehow responsible for the so-called miracles? What, if anything, is their purpose?

9. Annika repeatedly manifests the stigmata, nearly always accompanied by seemingly miraculous effects on others and every indication of extreme pain for herself. According to Father Ferger, the opinion of the Catholic Church about such cases, as Monroe expresses it, is that an “anointed few are here to aid in the redemption and salvation of the world, to serve as a living reminder of the suffering Jesus endured for us all.” What is Monroe’s opinion about this explanation, and do you agree or disagree with him?

10. Does Monroe do the right thing by kidnapping Annika?

11. Did you find the relationship between Annika and Monroe as sister and brother a believable one?

12. The author seems to be linking Annika’s accident and its aftermath with the murder of Heidi Morgan and its aftermath. It is no coincidence that Monroe and Heidi’s sister Allison fall in love. In what other ways are these seemingly disparate events linked, and what do you think the author’s point might be in associating them as he does?

13. Is Monroe a trustworthy narrator? Are there limitations to the reliability of his narrative, and if so, what are they?

14. Monroe plainly believes there is something excessive and obsessive in the way his mother turns to religion after Annika’s accident. Do you agree? Is her response a healthier one than that of her husband, not only for herself, but for Annika and the family as a unit?

15. Monroe’s mother turns to religion to help her deal with the pain and uncertainty of Annika’s condition; his father turns to work, alcohol, and an extramarital affair. What does Monroe turn to, and is there anything similarly obsessive about it?

16. Annika is diagnosed as being in “a persistent vegetative state.” This is the same diagnosis applied to Terry Schiavo. Do you think the parallels between the fictional case of Annika and the factual one of Terry Schiavo are coincidental or deliberate, and did your feelings about the Schiavo controversy impact your reading of Maybe a Miracle?

17. Monroe calls many American institutions and traditions into question in the course of the novel, but baseball seems to retain a purity others do not; it is surely no accident that Annika first starts bleeding from her palms during a Reds game, nor that she is “cured” of her coma by being struck with a foul ball. Why do you think the author uses baseball in this way?

18. In the accompanying interview, author Brian Strause makes a distinction between faith and religious belief, then goes on to call Maybe a Miracle “a celebration of faith.” Do you agree with him?

Learn More About Maybe a Miracle
print
Back to Top