A Week in October Reader’s Guide 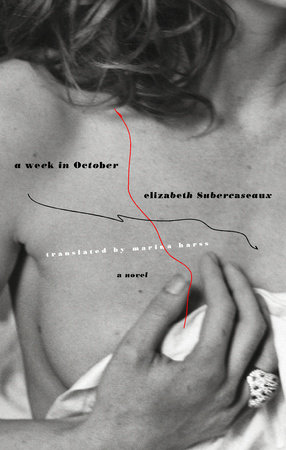 A Week in October Reader’s Guide

1. Discuss the early scene when Clara encounters the old woman in black rags. (pages 2- 6) What does the woman symbolize?

2. When Clara goes to the market she observes another elderly woman in black and reflects on the woman’s life and her own, commenting on the woman’s face. "A person’s face is the mirror of her soul, but also the mirror of her partner in life; when that person is gone, it becomes the reflection of the dearly departed." What effect did the observation have on Clara? Do you agree with Clara?

3. What do you think of Clemente? Is he a coward or self-centered because he won’t ask for forgiveness about his affairs or did he really not want to cause Clara more pain? When someone is dying and there are secrets, what do you reveal and what do you let be?

4. How does Clemente change throughout the novel? What does his character represent?

5. What does the novel say about marriage-does it begin to die from the moment we say "I do"? What of the comfortability that we take for granted? What do you think of Clara’s statement that "Sometimes loving a person isn’t the most important thing, but rather the serenity that person produces in your soul." (Page 41)? What happens to passion, not just the sexual passion, but the passion for life?

6. What kind of relationship did Clemente have with Eliana, his mistress of 7 years? Was he in love with her? Why did he tell her about Clara’s illness?

7. Clara’s grandmother tells her "Death is a solitary matter." On page 48 Clara says "All I know is that Clemente is the only person in this world in whose presence I am not ashamed to die." Later in the novel (page 135), when writing about Lionel’s death, Clara reflects on "the honor to be present at the most important moment of a person’s life." Discuss these very different statements about death.

9. In the last weeks, as Clemente reflects on who Clara is and their life together he paints a picture of someone who is distant and closed off although she was not always that way. Does the notebook reflect the same kind of person?

10. Does the notebook give Clemente insight into Clara’s suffering from the illness that he might otherwise have not known? How did it make him feel? Why did he despair over whether to approach Clara about the notebook? What would you have done?

11. Why does Clara want to keep her illness a secret? Why doesn’t she even tell her best friend Amanda? What prompts her to finally write to her? Why didn’t she actually send the letter? What is Amanda’s reaction when Clemente finally calls her?

12. When Clemente talks with his ex-mistress and good friend Ana María about Clara’s illness and the notebook, Ana states the following (page 97). "Normally a woman would not start an affair when she is battling cancer, but she may strongly desire it, perhaps more than at any other time in her life, in order to feel complete. Women always feel incomplete. Almost all our secrets have to do with something we feel we lack." Are these true statements?

13. Ana also states "Very few people are content with their lot in life and a novel is often the reflection of that disillusionment." (page 100) Thinking back on other novels you’ve read, do you think this is an accurate statement about novelists? Can you cite some particular works of fiction that support Ana’s opinion?

14. Why did Clara never confront Clemente about his affairs? What is your reaction to Clemente’s narrative about the pain he feels at her deception (page 128)? How does that pain change after Clara dies?

15. Discuss the relationship between Lionel and Clara. What did it have that Clara’s relationship with Clemente lacked? What was missing? How did it change Clara? How does Clemente justify its existence?

16. Did Clara really have a love affair with Lionel? And if she didn’t, if it was her imagination, what was she doing in his apartment? We learn that she knows specific details about the apartment and that she was there. Why would she have been there?

17. Is the notebook a novel or a journal – or a little bit of both? Clemente suggests Clara write the novel. Why then, did he convince himself it was not a novel, but a journal? Does Clara write to seek revenge or does she write that she was unhappy and no longer in love with Clemente to make it bearable to leave him and those things behind when she dies?

18. Discuss the structure of A Week in October. How does it add to the novel?

Learn More About A Week in October
print

The Bride Will Keep Her Name
Jan Goldstein

Making It Up As I Go Along
Maria T. Lennon

Imagine Me and You
Billy Mernit

The Quest For the Holy Veil
Kimberly Llewellyn

Beyond the Waves
Elizabeth Marek

Anything for Jane
Cheryl Mendelson

Through Thick and Thin
Alison Pace

They’re Not Your Friends
Irene Zutell

A Page Out of Life
Kathleen Reid