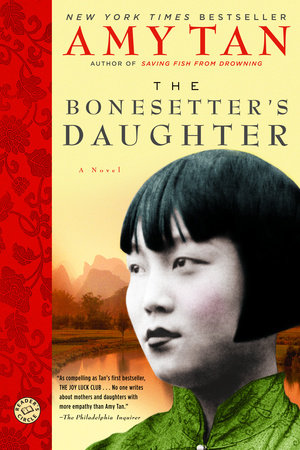 1. Bones constitute an important motif in The Bonesetter’s Daughter. What is the signiﬁcance of the book’s title? How does breaking a bone change Ruth’s life and her relationship with her mother? What importance do bones hold for LuLing and Precious Auntie?

2.Each year, Ruth makes a conscious decision not to speak for one week. Why does she elect to go silent? In which ways does this self-imposed muteness mirror the challenges faced by both her mother and by Precious Auntie? How does Ruth ﬁnd her voice as the novel goes on?

3.From childhood onward, Ruth is locked in a constant struggle with her mother. In which ways does her behavior echo LuLing’s rebellion against her own mother? How do these conﬂicts have violent consequences, both physical and emotional?

4.To frame the novel, Tan uses the device of a story within a story. How is this effective in bringing past and present together?

6.LuLing begins her story, “These are the things I must not forget.” Why is she so adamant about remembering–and honoring– what has come before? In contrast, what is Precious Auntie’s attitude toward the past? In which ways does she recast prior events, thus concealing the truth from LuLing? How does Ruth grapple with what she uncovers about the history of her family, and what it means for her future?


7.Ruth is shocked to learn that her aunt, GaoLing, is not her mother’s real sister. How does the relationship between the two women defy the adage that blood is thicker than water?

8.How does the dynamic between LuLing and GaoLing evolve as the book unfolds? What emotions does LuLing feel most strongly toward GaoLing, and vice versa? Why?

9.Although GaoLing speaks English ﬂuently, by contrast, LuLing never learns to communicate effectively in the language, instead relying on Ruth to be her mouthpiece. How is the spoken word depicted in this novel? Is it more or less important than the written word? How does LuLing communicate in other ways–for example, artistically?

10.How does the concept of destiny shape the lives of both Precious Auntie and LuLing? How does each woman ﬁght against the strictures of fate? In the modern world, does destiny hold as much weight? Why or why not?

11.Both Precious Auntie and LuLing lose love in tragic ways. How is romantic love depicted in The Bonesetter’s Daughter? How does Ruth’s concept of love differ from that of her grandmother’s and mother’s? Does LuLing’s conception of love evolve over time?

12.LuLing is introduced to Western ideas and religion while living and working in an American-run orphanage. How does she reconcile these different ideologies with the beliefs she holds? Does her belief in her family’s curse fade or blossom within the conﬁnes of a different societal framework?


14.Which of GaoLing’s characteristics enable her to adjust to America with more ease than her sister? Which make it more difﬁcult?

15.“Orchids look delicate but thrive on neglect.” In which way does this idle musing by Ruth apply to the other relationships in the novel, including her own with Art and his children?

16.Ruth has lived with the specter of Precious Auntie her entire life. How does her mother’s obsession with Precious Auntie affect Ruth? Do you view Precious Auntie’s presence next to Ruth in the last scene of the book as a ﬁgurative or a literal one? Why?

17.Based on her manuscript alone, the translator of LuLing’s story becomes fascinated with her. What about her story, in your opinion, is so alluring and transcendent? How does her fading mind open her to new experiences?

18.As LuLing loses her memory, how does her story become more clear to Ruth? How does Tan explore the transience of memory in The Bonesetter’s Daughter?

20.What signiﬁcance do names and their nuances have in The Bonesetter’s Daughter? Why is it so important that Ruth discover her family’s true name? When Ruth discovers what her own name means, how does that realization change her relationship with Lu-Ling?

When These Mountains Burn
David Joy

Walking on the Ceiling
Aysegül Savas

The Lords of Discipline
Pat Conroy