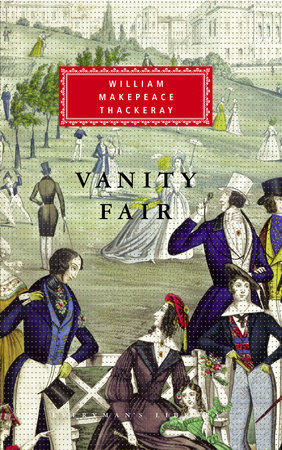 1. In her Introduction, Joanna Trollope asserts that "one of the huge charms of [Vanity Fair] is that nothing is conventional." Do you think Thackeray’s choice of a protagonist speaks to this claim, given the novel’s picaresque structure? How does this choice inform the novel? In what other ways does the novel confirm Trollope’s claim?

2. What is your opinion of Thackeray’s preface, "Before the Curtain"? How does it illuminate for you what he is attempting to do in the novel? In what ways is Thackeray "manager of the performance"? Discuss the role of the narrator in the novel. Is he reliable?

3. Why does Thackeray insist that this is a "novel without a hero"? Do you agree? What are the implications, if any, of such a claim?

4. Compare Becky and Amelia. What, if anything, does Thackeray intend by their contrasting destinies? Does one represent or confirm Thackeray’s moral viewpoint better than the other, or do neither? What do you think of the preponderance of unlikable characters? Do you find Thackeray’s outlook in any way misanthropic?

5. Anthony Trollope points out that many of Thackeray’s contemporaries concluded upon reading Vanity Fair that he "was no novelist, but only a cynic." Do you agree? Do you think this judgment was simply a consequence of the period?

6. Robert Louis Stevenson, in a comment about the novel, remarked on Rawdon’s striking of Lord Steyne in chapter 53, saying, "If Rawdon Crawley’s blow were not delivered, Vanity Fair would cease to be a work of art." Do you agree with this assessment? Why or why not?

7. Discuss the significance of the Battle of Waterloo. What role does this crucial event play in the novel? Does it in any way serve as a metaphor for other episodes in the text?

The Small House at Allington
Back to Top