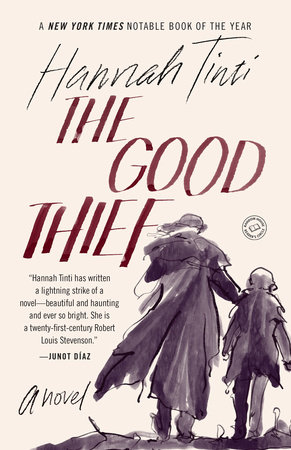 1. How do the time period and the locale shape the novel? How did the needy and the sly fare in rural America before the twentieth century? What historical aspects of The Good Thief surprised you the most?

2. What were your impressions of Saint Anthony’s? What were the motivations of Father John and the brothers who cared for Ren there? Were they cruel or simply realistic?

3. Did you believe the story Benjamin told when he took Ren from Saint Anthony’s? Would you have fallen for the scams they ran? What vulnerabilities did they prey on? What is the key to being a successful scoundrel?

4. What did The Lives of the Saints mean to Ren before and after he left Saint Anthony’s? How did his feelings about religion change throughout the novel? How did his early lessons in sin, penance, and ritual serve him in the real world?

5. What enabled Benjamin and Tom to engage in grave robbing without feeling repulsed? Can their practical logic be justified? What is the emotional value of the possessions of the dead?

6. In chapter fourteen, Doctor Milton lets Ren see his scarred skin under a microscope. What changes for Ren in that en- counter? How did his injury affect his life in different ways throughout the novel? How did you react when you discovered how his hand had been severed?

7. The Harelip, Mrs. Sands, and Sister Agnes all seem powerful and skilled in different ways but don’t fit traditional female archetypes of wives or mothers. How are women represented in The Good Thief ? How do these women affect Ren’s story?

8. In what ways is Ren wiser than Brom or Ichy? What makes him better prepared for life on the lam?

9. What does Dolly teach Ren about himself and about the nature of death and darkness in the world? What effect does Ren have on Dolly?

10. Discuss the images Ren had created of an ideal mother as someone beautiful who could provide comfort, a warm bed, and good cooking. How does Sister Agnes help him cope with the reality of his mother? Should he have been sheltered from knowing the truth? How does Mrs. Sands fulfill or not fulfill the role of mother for Ren?

11. What is the source of McGinty’s sadism and bitterness? What did it take to defeat him?

12. Early in the novel, Benjamin and Tom discover Ren’s ease with trickery and declare that he is already one of them. Did he possess these skills innately or were they the result of having to survive at Saint Anthony’s? How much control over his destiny did Ren have? Did nature or nurture have the greater role in his approach to the world?

13. Discuss the title. What makes a good thief—either in terms of being a noble thief or a skillful one? Can this be applied to the epigraph from Emerson, describing the rewards available to a good “trapper”? And how does this relate to the biblical story of the Good Thief, who was crucified with Jesus Christ on Golgotha?

14. What innovative approaches to storytelling appear in The Good Thief ?

The Last Days of Night

The Autobiography of Mrs. Tom Thumb

At the Edge of the Orchard
Back to Top