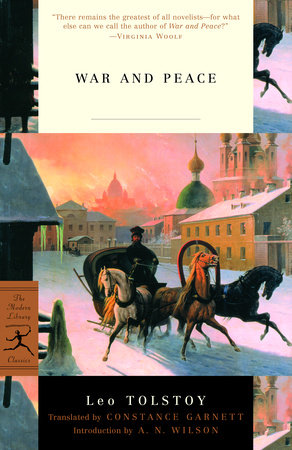 1. 1. In an article, “Some Words About War and Peace,” Tolstoy writes: “What is War and Peace? It is not a novel, even less is it a poem, and still less an historical chronicle. War and Peace is what the author wished and was able to express in the form in which it is expressed.” He goes on to discuss how many precedents for this “disregard of conventional form” there are in the history of Russian literature. How do you respond to this characterization of the novel? Does it help you understand its scope, structure, or style?

2. 2. Relatedly, while some novelists have bemoaned what they considered to be the formless nature of War and Peace, Henry James called it “a wonderful mass of life.” How did the novel’s length affect your reading experience? Does its scale mirror its comprehensive outlook? Does Tolstoy’s ambitious vision succeed, in your opinion?

3. 3. Tolstoy also writes, with regard to the “character of the period” he was trying to depict, that it “had its own characteristics . . . which resulted from the pre-dominant alienation of the upper class from other classes, from the religious philosophy of the time, from peculiarities of education . . . and so forth.” What do you make of Tolstoy’s treatment of the themes of aristocracy and class, religion, and education in this work?

4. 4. Discuss the eventual marriage of Natasha Rostova and Pierre Bezukhov. How does their alliance speak to larger principles, if at all? How does the concept of family relate to the theme of war? Are Natasha and Pierre representative of Russian social life at the time? Why or why not?

5. 5. Regarding “the divergence between my description of historical events and that given by the historians,” Tolstoy draws interesting distinctions between the artist and the historian: “As an historian would be wrong if he tried to present an historical person in his entirety . . . so the artist would fail to perform his task were he to represent the person always in his historic significance. . . . For an historian considering the achievement of a certain aim, there are heroes; for the artist treating of man’s relation to all sides of life, there cannot and should not be heroes, but there should be men. . . . The historian has to deal with the results of an event, the artist with the fact of the event.” Discuss Tolstoy’s concern with history, and the place he accords to the individual in the historical process.

6. 6. What is Tolstoy’s verdict on Napoleon? How does this novel treat the idea of the historical “great man”?

7. 7. Tolstoy’s focus on five upper-class families contrasted sharply with the struggles of the nation during the Napoleonic war. And yet, many see the novel as a celebration of the Russian spirit. How do you perceive Tolstoy’s emphasis on the aristocratic? How does the Revolution affect Russian class structure, if at all?

8. 8. A contemporary critic, N. N. Strakhov, said, “What is the meaning of War and Peace? The meaning is expressed in these words of the author more clearly than anywhere else: ‘There is no greatness where there is no simplicity, goodness, and truth.’ ” Is this statement as simple as it sounds? Discuss.

Learn More About War and Peace
print
Back to Top