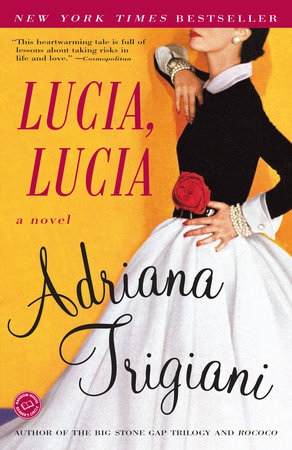 1. Why do you think the novel begins in the present before telling Lucia’s story in flashback? Is this an effective way to relate Lucia’s story? How do you think your reading or interpretation of the novel is affected as a result of partially knowing the story’s ending?

2. Lucia, Lucia is set in 1950s Greenwich Village. Discuss how Trigiani portrays the neighborhood, especially in contrast to its usual bohemian image.

3. On page 45, Lucia’s father tells her, “You deserve your own life.” Do you think Lucia eventually gets her own life, or is what happens to her the result of circumstances beyond her control? Overall, how much is Lucia free of her traditions? How much is she a captive to them?

4. What role do the men in Lucia’s family—her father and brothers— play in shaping her life and her destiny?

5. What’s behind Lucia’s decision to stay at home and care for her mother despite the opportunity to advance her career? Also, why does she stay on at B. Altman’s despite having to change positions and the changes in the store? Is it only because she has to care for her mother, or are there other factors?

6. Why do you think Lucia keeps all of her wedding presents in her apartment and continues to wear her mink coat? What doyou think Lucia’s life was like in the years after being jilted by John Talbot until the time she tells her story to Kit?

7. Religion plays a large role in shaping the Sartoris’ behavior and customs, as well as the behavior of those closest to them. What is Lucia’s view of religion and faith, especially during her and her family’s various trials?

8. Dante and John Talbot love Lucia in different ways. Discuss the ways they both love her and the different ways she loves them back. Does Lucia have a true love? Given her experiences, what do you think is Lucia’s view of love?

10. On page 249, Lucia tells Kit that people don’t change very much in their lives. Do you think Lucia changes? If so, how?

11. While in Lucia’s apartment (page 10) Kit feels as if she’s in a room filled with things with meaning but no purpose. Do you think this in any way symbolizes Lucia’s life, or is this only Kit’s superficial impression of Lucia?

12. Why does Lucia choose to bestow her things on Kit? Is Kit like Lucia? Does Lucia see some of herself in Kit, or vice versa?

13. Lucia believes in beauty, style, and elegance. Do these qualities betray her or do they give her life meaning?

14. Do you think there is any truth in John Talbot’s saying to Lucia that she is a woman who can survive being left at the altar (page 255), or is he just making excuses for himself?

15. In her last meeting with John Talbot in the state prison, Lucia seems unusually poised and equanimous throughout their con- versation. Are you surprised either by her composure or by her attitude toward him?

16. What do you think are Lucia’s dreams? On page 256, Lucia says that she has no regrets over the events in her life. Do you believe her? Do you think Lucia has led a happy life?

Learn More About Lucia, Lucia
print
Back to Top