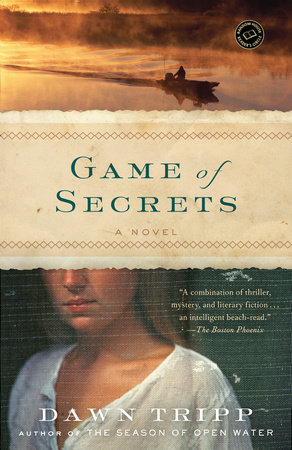 Dawn Tripp on GAME OF SECRETS

My novels  start  in pieces—on the  page  for months—fragments of character, story, scene. I write longhand, in notebooks  or on scraps of paper, the backs of receipts, the leftover white space of a grocery list—which I then  transcribe into  my  laptop.  Some  of those  ﬁrst thoughts are imagined, some are stripped from  real life. But out of those pieces of raw material, I begin to map a story. I don’t polish up my early drafts. I leave some passages entirely without punctuation. I leave things untidy, open to change. That  openness, I feel, is criti- cal. I ﬁnd  that  when  I can let myself stay open  to possibilities in a story  that  I may not  yet have uncovered, when  I can let myself be driven by what I do not yet know, the story often turns,  deepens, in un- expected, revelatory ways.

Game of Secrets started with four primary fragments—the real-life story of a skull that surfaced out of gravel ﬁll with a bullet hole in the temple, and three images: a fourteen-year-old boy driving fast down an unﬁnished highway; two lovers meeting in an old cranberry barn; and two women playing Scrabble. I did not know their names. I did not know the details speciﬁc to their lives, but I could feel the under- currents of tension between them.

The image of the Scrabble game hit me especially hard. Not just because the unfolding of the mystery in the novel mirrors the play- ing of a Scrabble  game:  clue after  clue is revealed,  the  story  comes together  piece by piece like a puzzle, as in Scrabble, disparate letters are arranged into words, which in turn are arranged into a larger co- gent  grid.  That image  hit  me  hard  because  I  have  always  loved Scrabble. I grew up playing with my grandmother. She taught  me cards  as well—pitch, gin,  poker,  bridge.  But it was Scrabble  that  I loved. I remember the thrill I felt when I was old enough to keep my own letters,  to have my own rack. We  would play with my father after lunch and, after a game or two, my father would drift off to something else. “You want  to  play again,  Nana?”  I’d ask. And my grandmother would  nod,  light  another cigarette, and start  ﬂipping over the tiles. We would play game after game. Until it was time for her to ﬁx supper. Then  we’d eat, clear the table, wash the dishes, I would dry them for her, then I’d ask to play again.

The idea  for  Game  of Secrets came  to  me  years  after  she  was gone.  The story  has nothing to do with her  life; the  women  in the story are not modeled after her, but the sense of my time with her— generational,  intimate,  lost—is strung  all through  it. As I wrote, I remembered  those long childhood hours: the stillness of the house, the light tick-tack as she lay down her tiles, the smell of her cigarette balanced   on  the  ashtray,   just  resting   there   untended, dwindling down.

And I remembered, too, things she had taught me over the years as we played. She played Scrabble for the words, as many women in her generation  did. I always played for the numbers.  How we play that game can reveal so much about how we tick, how we live, who we are. In Scrabble,  some play to keep the board  open,  some play to shut it down. Some play with an eye to the sum of the total scores of all players;  some  play,  simply,  to  maximize  their  own  score.  Most players will look at the board  and see the words that  ﬁll it. But a really good player, a canny player—and she was one of those—will also see opportunity in the skinny spaces still left open  in between.

As I wrote the scenes for Game of Secrets, the game for me became the  perfect  lens  for  a story  about  two  women  and  their  families bound  together  and divided by unspeakable secrets—a brutal past, a murder, a love story. Because what are words if not a bridge—in a game of Scrabble  or in a novel? Between  one person  and another. Thought and reality. Past and present,  present  and future.  Words bridge  silence. Words, and the stories  they comprise, bridge  time.

1. Discuss the role of love in Game of Secrets, particularly the role it plays in the  lives of the  three  women.  How  does love relate  to the other themes in the  novel,  such  as longing, absence,  violence,  and memory?

2. Consider the  differences among  the  three  women  in the  novel, and how these  qualities  affect their  interactions and the  courses  of their  individual  lives. How  does the  friendship  between  Ada and Jane impact Marne’s relationship with her mother? In what ways are Jane and Marne similar and in what ways are they different? What do the  women  learn  about  themselves through one  another? Does this reﬂect  dynamics  in the female relationships in your own life?

4. Discuss the role of silence in the novel. How do Jane and Ada, as well as the  other characters, use—or  refuse—language in order  to build their  lives and their  relationships  with others?  Are there  silences in your family and in your friendships that are necessary to keep? What do those  silences represent? Discuss.

5. Luce, and the mystery surrounding  his death, plays a pivotal role in the story, yet he is little more than a ghost.  How  does the absence of this man—rather than  his presence—drive  the  story? How  do other forms  of loss function in the  novel?  Do  you believe  that  ab- sence can propel us as much as or more than presence? Discuss.

6. The  bridge that  joins the small town of Westport to the world outside  is a signiﬁcant metaphor in Game of Secrets. To Jane and Ada, the bridge  and the new highway  also mark a distinct  separation be- tween  the past and the present. Discuss.  In what sense does the past keep these characters together  and in what sense does it break them apart?

7. Game of Secrets is a “mosaic”  narrative, in that  it is told  from  the perspective of several  different characters. It  also moves  back  and forth in time. Why do you think Tripp chose to tell the story this way? What do we learn that we might not know otherwise?


8. One  central  motif in the novel is the Scrabble  game that  Ada and Jane play every Friday.  Why  do you think  Tripp chose this particu- lar game? Discuss the ways the structure  of the narrative echoes the game that Jane and Ada play.

9. Ada and Jane have very different  styles of play. What  do these styles reveal about  how each woman  has chosen  to live her  life? Is your style of play more  closely aligned with Jane’s  or with Ada’s? What do you think  this says about  you, if anything? Tripp has said that  Scrabble was an important game in her family while she was growing up. Are there  games that have been essential in your life, and in the life of your family?


10. Marne’s hatred for Huck is overt and palpable in the novel’s early stages. Discuss what Huck  represents to Marne. Are there  common- alities between them as well as differences that breed Marne’s loathing? How do her feelings for him change over the course of the novel?  Why?  How  did  your understanding of Huck  evolve  in the course of the novel?

11. Both Jane and Marne have a particular, almost secretive relation- ship with books in Game of Secrets. Jane writes in the margins of her books of poetry, conversing in a way she doesn’t  seem to do in life, while Marne excises passages from  books,  a habit  that  then  evolves into  her work with origami. What do Marne’s origami  birds  repre- sent to you? How do the birds inform  her character, her life, and her relationships?


12. At the end of the novel, several essential secrets are revealed.  Do these revelations change the way you understand Jane and the story? Looking back over the  novel, do you now see clues you didn’t  pick up on the ﬁrst reading?

Speak of the Devil
Richard Hawke

Name to a Face
Robert Goddard

Into the Blue
Robert Goddard

The Last Whisper in the Dark
Tom Piccirilli

Every Step She Takes
K.L. Armstrong